Why Narendra Modi is concerned about depression among students in India

In his radio address “Maan Ki Baat" in March this year, Prime Minister Narendra Modi urged the people of India to openly discuss depression and other mental health issues.

“The first mantra (towards curing depression) is the expression of depression instead of its suppression," Modi said.

He also said that students living in hostels are particularly vulnerable to depression due to loneliness.

Statistics from various health agencies and a 2016 CSDS-Lokniti survey among Indian youth (15-34 years) suggest that Modi’s concerns are quite justified. Depression and related problems are widespread among students in India.

A large majority of them are either reluctant or unable to seek medical help for this. Those suffering from depression are also likely to pick up unhealthy habits such as tobacco and alcohol consumption.

Data from multiple studies point that mental health-related problem is a serious issue. The National Mental Health Survey 2015-16 conducted by National Institute of Mental Health and Neuro-Sciences (NIMHANS), reported mental morbidity of 10.6% among those who are aged 18 and above. The rate was slightly lower, 7.5%, among the youth (18 – 29 years).

A World Health Organization report released in 2017 estimated that more than 56 million individuals in the country face depressive disorders currently.

A recent study published in the Asian Journal of Psychiatry based on a survey of more than 700 randomly selected students found that almost half of them (53%) were suffering from either moderate or severe form of depression.

The findings of the 2016 Lokniti-CSDS Youth Survey indicate that around four out of 10 youngsters who are currently studying felt regular or occasional depression/tension during last couple of years. Loneliness may be one reason as in the survey 30% also confirmed feeling lonely at times.

It is distressing to note that around 6% of the students confirmed that they felt like committing suicide at least once in the last couple of years. In absolute terms, these are likely to be disturbingly large numbers.

Findings of the study also help in dispelling the myth that problems like depression and loneliness are only an urban phenomenon. This problem is prevalent equally among rural and urban youngsters. There is hardly any gender difference on this issue as per our survey. The study published in the psychiatry journal, though had demonstrated greater incidence among women.

Because of the social stigma associated with mental wellness problems, many people do not admit to these problems. Thus, the reported findings could have an under-reporting bias. This also discourages seeking medical help.

Rather than treating depression and loneliness medically, many students end up moving towards unhealthy habits like consumption of alcohol and tobacco in the hope of getting ‘relief’. The study indicates that these habits are relatively higher among those who face mental health issues. The difference increases with severity of mental problems. 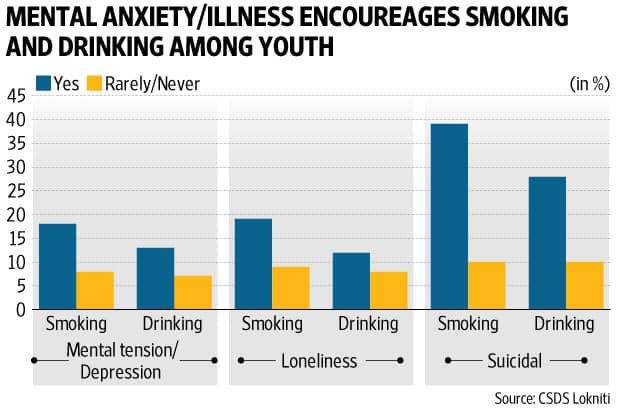 Less than 10% of students who had felt depressed or lonely had consulted a doctor. Among those who had suicidal tendencies, less than one-fourth had ever visited a psychologist or counsellor for help. Expectedly, the figures are found to be worse in rural areas.

These extremely low figures are due to multiple factors like social stigma around visiting a counsellor or taking treatment for mental health issues, lack of awareness and also lack of required infrastructure.

The last one is an important concern because even those who wish to consult the doctor, cannot access such facilities. There is serious shortage of doctors and clinics to deal with such patients in India. The recent closure of the entire out-patient department facilities for mental health patients at AIIMS, Bhopal due to resignation of both doctors is a small example of the state of affairs with respect to mental health.

A NIMHANS study has also revealed a massive shortage of trained staff for addressing mental health problems. There are only 4,000 trained doctors for mental health in the country, according to  a NIMHANS report. They are largely in urban areas.

One hopes that Prime Minister Modi’s concern about mental health issues could provide a beginning towards addressing this problem.

This story is based on survey data shared exclusively with Mint. Sanjay Kumar is professor and currently director of CSDS and Pranav Gupta is a researcher with Lokniti CSDS.