ICMR says rise may be attributed to increased intake of alcohol, tobacco products

New Delhi: Cases of lip and oral cancer in India have more than doubled since 2012 as a result of increased consumption of alcohol and tobacco products, the Indian Council of Medical Research (ICMR) said on Wednesday. Lip and oral cavity cancer are the most common cancers among males in India.

The apex research body under the health ministry, also said while releasing the latest cancer data for India that the number of fresh cancer cases and deaths have been rising since 2012.

ICMR collated the data from the International Agency for Research on Cancer (IARC), a World Health Organization (WHO) agency that compiles and publishes incidence and mortality data for 185 countries for 36 types of cancers. The IARC’s Section of Cancer Surveillance released its latest global cancer data—the GLOBOCAN 2018—in September.

“Alcohol consumption and increased usage of betel nut/areca nut, forms of tobacco such as sweet supari and other chewing products containing tobacco have a direct impact on human health. Many people don’t know that supari and other forms of tobacco can even cause sudden death. The rise in lip and oral cancers can be directly linked with alcohol and tobacco," said Ravi Mehrotra, director, ICMR-National Institute of Cancer Prevention and Research. 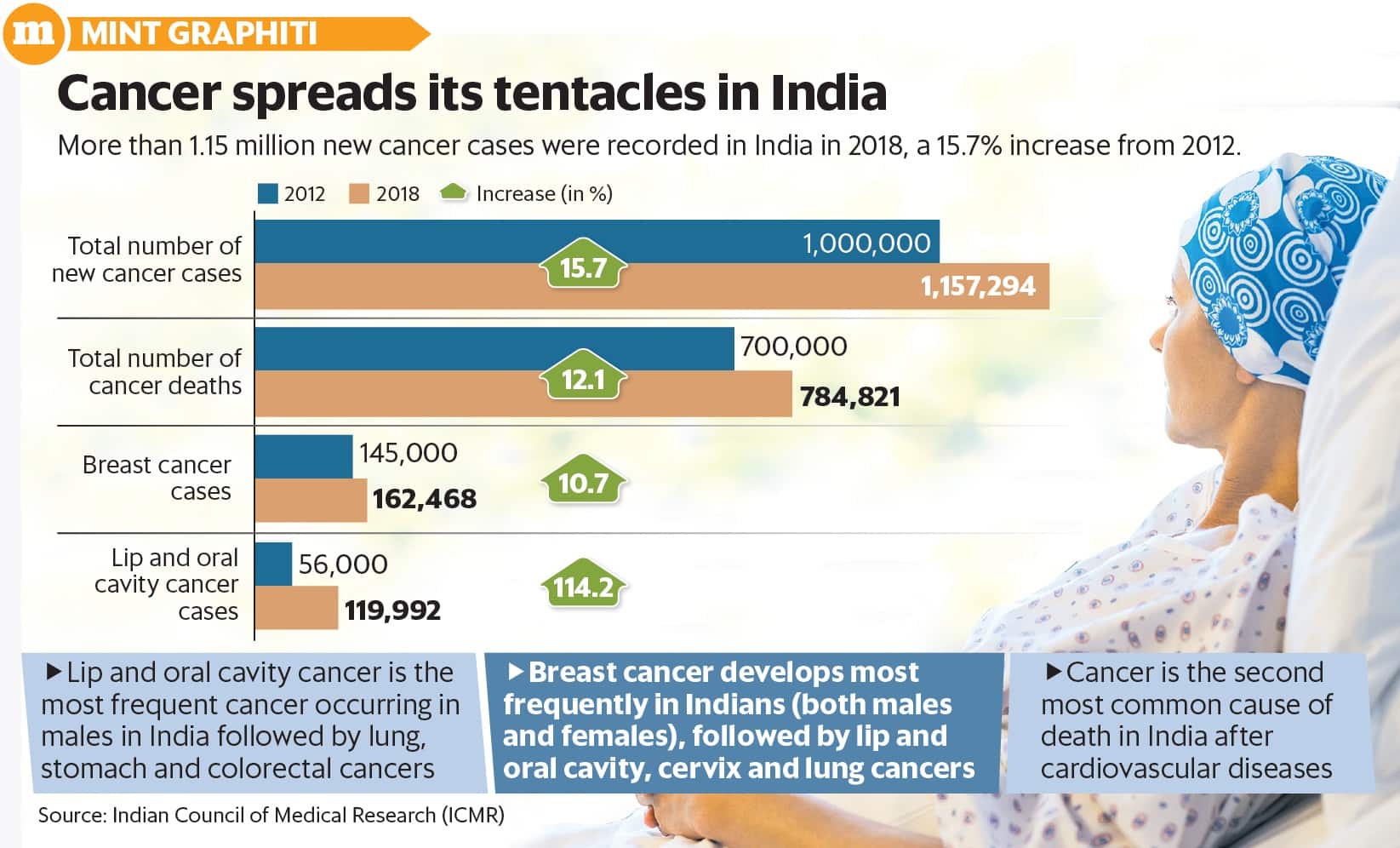 “The usage of tobacco has decreased in India to an extent but alcohol consumption is certainly increasing. Moreover, with more diagnostic facilities available now and increased awareness, more and more cases are coming to notice," he said.

“Around 18% of the world’s population lives in India, so it becomes important to understand the disease burden of cancer in every state of the country," said Mehrotra.

“Therefore, a part of the ‘Global Burden of Disease (GBD) Study’ was carried out in our country. This study has been used to understand the variation in state-level burden of cancer as compared to the global burden," he said.

According to the GBD study , breast cancer remains the most frequent cancer among Indians (males and females combined), followed by lip and oral cavity, cervix and lung cancers.

After lip and oral cavity cancers, the most common cancers among Indian males are of the lung, stomach and colorectal, the study said.

Cancer is the second most common killer in India after cardiovascular diseases. The ICMR in 2017 had said that India is likely to have over 1.7 million new cases of cancer and over 880,000 deaths due to the disease by 2020 with cancers of the breast, lung and cervix topping the list.