India’s ecological hotspots are on a slow-ticking time bomb

In the aftermath of Kerala floods, a status update on India's five ecological hotspots that must be protected from climate change and global warming

Bengaluru/New Delhi: Every large-scale tragedy in India has often left behind more questions than answers. As Kerala struggles to recover from the worst floods to have hit the state in a century, the debris left behind by the destruction is littered with a fair share of questions. Was it a man-made disaster or a natural calamity? Poor dam management or unabated quarrying and commercial development?

While those questions would be endlessly debated, what is beyond dispute is the increasing risk of environmental stress. Average temperatures recorded in the subcontinent have consistently risen over the past six decades and continue to rise. India, with its geographic and demographic variability, stands as one of the most vulnerable regions in the world. 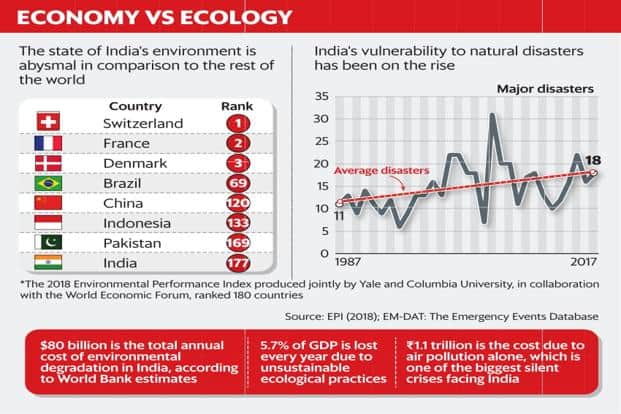 Ecological and climatic hazards loom large across the country: landslides and abnormal warming in the Himalayas, sea-level rise in the deltas and estuaries, unchecked dredging of rivers, endangered tribes and marine species in the Andaman-Nicobar archipelago are just a few. “The impact of the next ecological disaster can be reduced if we take urgent steps," says noted environmentalist, V.S. Vijayan. A co-author of the Madhav Gadgil committee report on the Western Ghats ecosystem, which has suddenly acquired a new breath of life, Vijayan says development and conservation should go hand in hand. “We are utterly against the sort of development that comes at the cost of exploiting our ecosystem."

Many parts of India, including the country’s vulnerable ecological hotspots, are already undergoing complex changes in weather and monsoon patterns.

“There has been a threefold increase in extreme rainfall events since 1950," says Roxy Matthew Koll, climate scientist, Indian Institute of Tropical Meteorology (IITM), Pune. “Our vulnerability to extreme rainfall has also increased as changes in land use and forest cover have altered the drainage patterns," he adds.

Over 71,000 Indians have died due to floods since 1950 and a further 19 million have been rendered homeless. Mint takes a look at the potential slow ticking ecological time bombs in the country:

The 2011 report by The Western Ghats Ecology Panel (WGEP), headed by ecologist Madhav Gadgil, described the Western Ghats as the “water tower" of peninsular India; a biodiversity treasure trove; and the backbone of south India’s ecology and economy. It designated the entire region as an ecologically sensitive area, in varying degrees.

Though the report’s recommendations were never implemented, the floods in Kerala has thrown the spotlight back on some of the findings, since the report had presciently predicted some of the events which unfolded over the past few weeks.

In the Western Ghats, some form of protection is needed though development can’t be curbed completely... We have to be prepared because climate change could increase rainfall variability- R. Sukumar, professor, Centre for Ecological Sciences

The biodiversity and ecosystem of the Western Ghats are threatened by pollution, mining and deforestation. Only one-third of the region is under natural vegetation, and much of this is degraded. A large part of the original natural vegetation was lost or converted to cultivated lands, coffee and tea plantations, and hydroelectric reservoirs.

“In the Western Ghats, some form of protection is needed though development can’t be curbed completely," says R. Sukumar, professor, Centre for Ecological Sciences. “We have to be prepared because climate change could increase rainfall variability. Landslides happen when you disturb the earth and there is too much digging. Kodagu has seen huge deforestation, while Sindhudurg and Ratnagiri in south Maharashtra have witnessed large-scale mining. Those involved in mining activity should bear the responsibility to restore the area," he says.

The proliferation of small hydropower dams, coupled with an expansion of roads and rail lines will leave an irreversible impact, warn ecologists.

Driven by economic development, population growth, and the rising demand for power, agricultural commodities and minerals, pressures on the region’s natural ecosystems are intensifying- Jagdish Krishnaswamy, a senior fellow at ATREE

“Driven by economic development, population growth, and the rising demand for power, agricultural commodities and minerals, pressures on the region’s natural ecosystems are intensifying," says Jagdish Krishnaswamy, a senior fellow at the Ashoka Trust for Research in Ecology and the Environment (ATREE). “If these trends continue unchecked, the remaining forests will become ever more highly fragmented and face the prospect of increasing degradation."

As one of the most unstable and fragile mountain regions in the world, the Himalayan range is witnessing one of the highest rates of warming globally. Glaciers are shrinking, even as warmer winters are leading to an increase in the frequency of snow avalanches in the western Indian Himalayas, posing a risk to the people of the region, many of whom are living at the threshold of natural disasters.

“The very base of the Himalayas, its geophysical nature, keeps it unsettled and prone to recurrent natural disasters," says Professor Maharaj K. Pandit, director, Centre for Inter-Disciplinary Studies of Mountain & Hill Environment at the University of Delhi. A burgeoning population that is leading to over-exploitation of natural resources and a renewed thrust on road building has put the region under tremendous pressure. Concerns have also been raised regarding new plans to build massive hydroelectric dams in the region.

“Degradation of the Himalayan ecosystem is mainly driven by anthropogenic activities, but climate change has exacerbated the impact," says S.S. Samant, scientist-in charge, Himachal Pradesh unit, G.B. Pant National Institute of Himalayan Environment and Sustainable Development, Uttrakhand. “Increasing temperatures are affecting the region the most since it is altering the lifecycle and habitat of several species in one of the world’s most important biodiversity hotspots," he says.

The 2,525 km river, that originates in the Himalayas, in Uttarakhand, and flows through five Indian states, is also regarded as a highly vulnerable, social-ecological system. Recent research reports have stated unprecedented low levels of water in the lower reaches of the river during summers. Also, pollution and solid waste management remain the biggest challenges in the Ganga basin, as well as in almost all the other major river basins in the country.

While the Central Pollution Control Board had identified 150 river stretches as severely polluted about a decade ago, that has gone up to 302 according to a recent evaluation. Maharashtra, which is one of the country’s most industrialised states, also has the most number of polluted river stretches (49).

“The Ganga-Brahmaputra basins are a unique freshwater eco-region," says Nachiket Kelkar, a researcher at ATREE. “Dams, barrages, and irrigation canals have been indiscriminately extracting water from these rivers. The problem of water pollution and unsafe disposal of solid waste has also severely aggravated," he says.

The Ganga floodplains, along with the Brahmaputra, are home to a number of evolutionarily unique and endemic species. For example, the Ganga-Brahmaputra basins have the highest number of freshwater turtle species in the world, amongst river basins. These basins support the subsistence and commerce of more than 800 million people.

The Sunderbans: A critically endangered ecosystem

With rising sea levels posing a challenge to coastal communities all along the subcontinent, the world’s largest river delta along the eastern coast, the Sunderbans, stands as one of the most vulnerable regions to emergent threats posed by climate change.

“It is low-lying and the land is also sinking at a faster rate. If we analyse the rise of sea-levels along the coast, it is also highest along the eastern coast, especially near the Sunderbans, where it is at least 5 mm every year," says S.C. Shenoi, director, Indian National Centre for Ocean Information Services (INCOIS), Hyderabad.

The world’s largest coastal mangrove forest, the Sunderbans, has been protecting the mainland from storm surges and cyclones more effectively than any man-made storm barrier could for years. However, increasing agriculture and industrial activity, coupled with rising sea levels, have destroyed thousands of hectares of mangrove cover.

The delta was geologically very active earlier. A number of dams upstream in the Ganges has reduced the amount of sediments coming to the coast- M.V. Ramana Murthy, director, NCCR

A recent report from the National Centre for Coastal Research, Chennai, points out that the West Bengal coast along the Sunderbans is the most vulnerable in the country to coastal erosion and has lost the maximum amount of land to sea—roughly 99 sq. km since 1990. “The delta was geologically very active earlier. A number of dams upstream in the Ganges has reduced the amount of sediments coming to the coast," says M.V. Ramana Murthy, director, NCCR.

The region has the world’s largest tiger reserve and is a refuge to numerous wildlife species, birds and reptiles, many of which are considered endangered. The rise in siltation and salinity threatens the survival of the indigenous flora and fauna, impacting the forest’s ecological quality, with its most prominent Sundari trees threatened with extinction.

The Andamans: vanguard for a potential tsunami

In the book Islands in Flux - the Andaman and Nicobar Story, author Pankaj Sekhsaria writes about the island chain’s unique flora and fauna being endangered by commercial, development policies of the mainland; its tribal population outnumbered by outsiders; and conflicts between tribals and settlers.

“The point is when we do not account for the geological volatility and ecological fragility of this region, are we not increasing vulnerabilities? For the Andamans, we need to take into account three levels of flux—sociocultural, ecological and geological," Sekhsaria says.

This cluster of 572 islands in the Bay of Bengal is home to primitive, indigenous tribes like the Onge (around 100 in number) and the Jarawa (around 400). While the proposal to build a railway line from the capital of Port Blair to Diglipur may have been kept on hold for now, the government think-tank NITI Aayog has come up with a development plan to promote ecotourism projects in the Andaman and Nicobar, as well as in Lakshadweep islands, raising concerns among ecologists.

“The last decade has seen an unplanned tourism boom," says Vardhan Patankar, a marine biologist. “While tourism is important for the economy of the island, the government should keep in mind the conservation of fragile ecology, unique biodiversity and culture of the islands."