On the smartness of streets

Though the form may be messy, there is a smartness inherent to a street that accommodates lives, households, shops, businesses and other things

The eastern side of Bandra Railway Station in Mumbai opens on the street that connects to the Bandra Kurla Complex—one of the most expensive business districts in the country. More than a hundred thousand people walk this street every day. The walk, however, is not easy. After moving through the dense ensemble of humans and automobiles near the mouth of the station, one is thrown into a messy and rough part of the street. This is the longest stretch of the walk. The edge of the street is not defined and messy, as eateries, grocery shops, hair cutting saloons, building materials shops, offices of lawyers, typists, real estate agents, etc. push themselves on to the gangway with a barrage of permanent and temporary shop-extensions. While thousands try to pass through this mess, other thousands occupy the street for a variety of transactions that range from hard-core buying/selling to aimless wandering. There is no sidewalk. Here cars, pedestrians, shop extensions, vendors, buyers and other casual occupiers mix to create a madness that could be harrowing for an unsuspecting visitor. Every planner passing through this street desires to organize it better and clean up the mess so that it becomes comfortable to its occupiers and passersby. 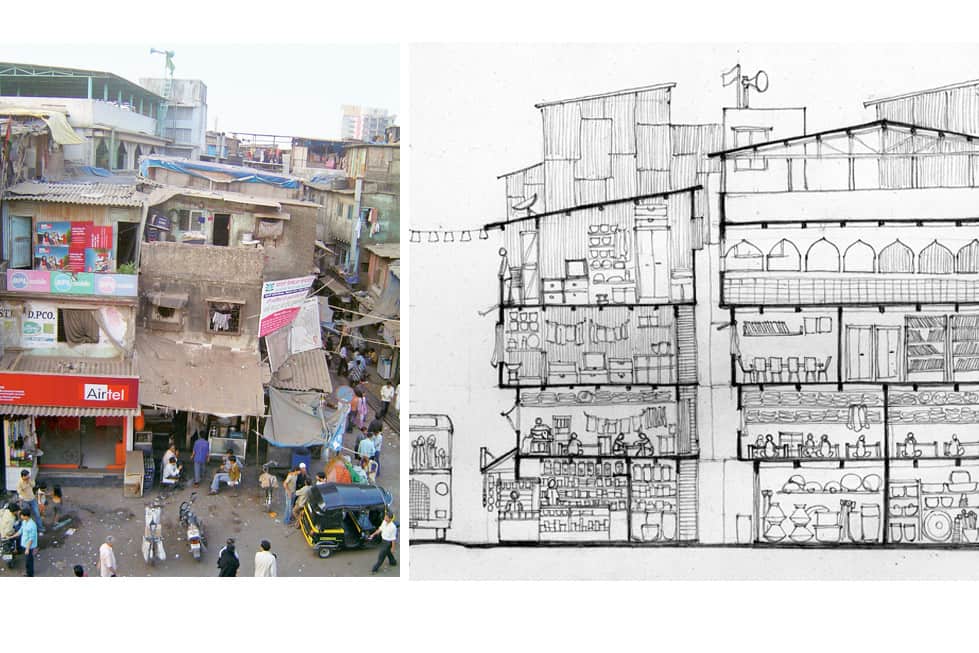 A pedestrian bridge connecting the railway station to the Bandra Kurla Complex opened in 2008 offering an interesting vantage to spend time observing the street. Behrampada, one of the most densely built slums in Mumbai, edged the street. Every house was about four-storied, built with used tin sheets, plywood, bricks, plastic, etc. The ground floors along the street were usually shops, the next two floors were small industrial units, mostly garment and embroidery making. In the nights they doubled as dormitories for workers. The owner of the house, who had rented the bottom three floors, occupied the top-most floor. There were also other buildings—a mosque with a community hall on the topmost floor and a library and a meeting room below. The urban form that appeared messy at the ground had a very high transactional capacity—the capacity to allow flows of bodies, commodities, ideas and money through it. Higher transactional capacity ensured not only quick facilities with fewer resources, but also better security and care as there were always eyes on the street. From the bridge, the relationship between workers, households, shops, the mosque and other things became evident. The messy form and its intensity made sense. The form has emerged from the folding of a variety of practices, spaces and lives and has an inherent smartness to afford all of these and more. The anxiousness with the street and the desire to clean it appears naïve from this vantage point.

Rupali Gupte is an architect and an urban designer based in Mumbai. She currently works as an assistant professor at the Kamla Raheja Vidyanidhi Institute for Architecture.

Prasad Shetty teaches at the School of Environment and Architecture, and also works with the Mumbai Metropolitan Region-Environment Improvement and Heritage Conservation Societies.