Mumbai: Wages of casual workers in rural India increased at the fastest pace in seven years across all categories of labour. A sharp rise in rural wages drove up discretionary spending in the countryside and contributed to an unprecedented decline in rural poverty between 2004-05 and 2011-12. Nominal rural wages rose 16% annually in these years, slightly exceeding the nominal growth rate of the overall economy in the period. Nominal gross domestic product (GDP) growth during this period was 13.7% per annum.

While rural casual wages vary widely, the variation has declined in recent years. The coefficient of variation (a measure of variability) across states declined from 40.2% in 2004-05 to 32% in 2011-12. This is partly owing to the fact that some of the states with the lowest wages such as Odisha, Maharashtra, Madhya Pradesh and Bihar saw above-average growth in wages, as economist and Mint columnist Himanshu pointed out in an opinion piece on 23 October.

The wage growth has been highest in South India. Karnataka and Andhra Pradesh logged the highest nominal wage growth of 19% a year in the country. Tamil Nadu saw average annual growth of 17% between 2004-05 and 2011-12. The wage growth was moderate in Kerala, but that was because of a high base.

Kerala has a long history of high wages, and it continues to lead the league tables of states ranked according to casual wages, with average casual wages of ₹ 314.8 (per person). Mizoram, Sikkim, Arunachal Pradesh and Jammu and Kashmir are the other states that have above-average causal wages. Chhattisgarh has the lowest casual wages in the country at ₹ 83.9. Madhya Pradesh, Gujarat, Delhi and Maharashtra are the other states with low rural wages. 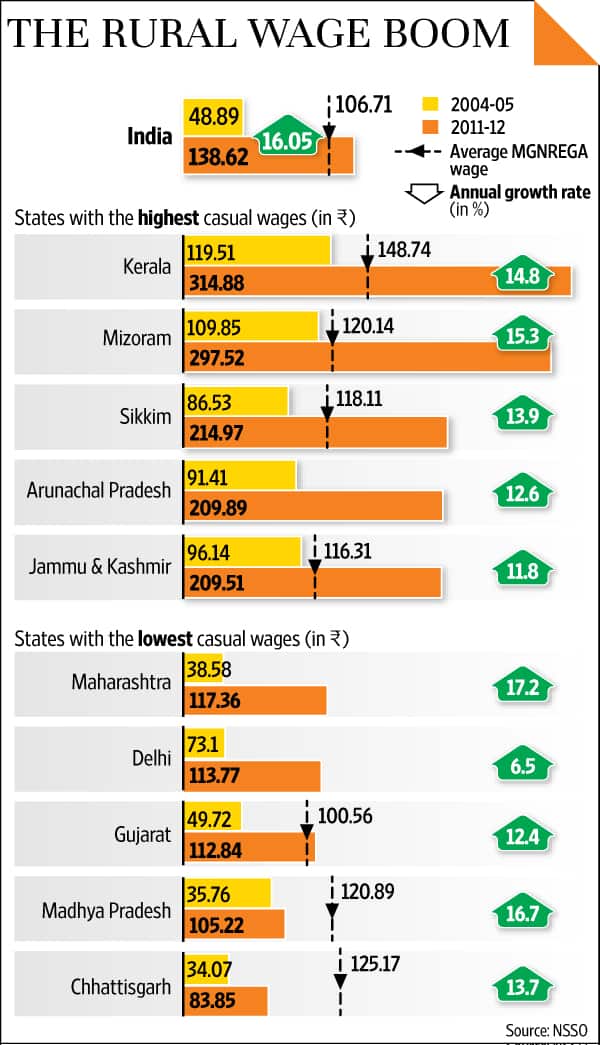 The average casual wages in most states seem to be higher than the average wages paid under the Mahatma Gandhi National Rural Employment Guarantee Act (MGNREGA). This suggests that factors other than MGNREGA may be driving rural wage growth. Research by the Commission for Agricultural Costs and Prices (CACP) shows that the pull effect of growth (in terms of higher construction wages, for instance) may have had a greater impact in raising farm wages than the push effect of MGNREGA. However, MGNREGA may have played a role in the initial years of its launch in raising the minimum wage floor and in bridging the wage divide across India. The MGNREGA effect was probably higher for the low wage states, where the gap between average casual wages and MGNREGA wages is small.

Rising casual wages seems to have been based on three key legs: rising construction activity, higher price support for farm products that trickled down to farm labourers, and MGNREGA. With construction activity weakening, and growth in price support to farmers tapering this year, two of the legs on which the rural wage boom stood, seem to be weakening. That may help explain why rural wages seem to be faltering now, as a recent Nomura report pointed out. If the rural dream turns into a nightmare, it could pose a formidable challenge to India’s poverty eradication efforts.

This is the third in a multi-part series, in which Mint examines the structural shifts in labour markets, based on the latest National Sample Survey Office data.