The biggest failure is not attempting, says founder of Bigtree Entertainment

“Had we not tried to start an online ticketing service in 1999, nothing would have existed," he said. From ₹ 25,000 as capital to over ₹ 1,000 crore in valuation—Hemrajani’s attempt has paid off.

After completing his master’s in business administration in marketing from Sydenham College of Commerce and Economics, Mumbai, in 1997, he joined J. Walter Thompson, an advertising firm. Hemrajani is an avid traveller, and it was on a backpacking trip to South Africa in 1999 that the idea of BookMyShow struck him.

“I was listening to a radio programme promoting tickets for rugby. While I was sitting under a tree, the idea clicked," said Hemrajani. He came back and shortly quit his two-year-old job in the advertising agency to start BookMyShow.com.

In the 16 years of his journey as an entrepreneur, he has seen dotcom booms and busts.

“It’s the bust phases that made us true entrepreneurs," said Hemrajani. “During the dotcom bust, we had two choices—to go back to corporate careers as we were getting calls from headhunters, or believe in the venture. We decided to stick around." He put his life’s savings in the venture and decided to take some risk.

The ability to take risks probably comes from his parents, who moved to Mumbai after Partition to fulfil the aspirations they had for their children. “The harsh environment taught us life lessons that no university in the world can teach about being a true entrepreneur," recollects Hemrajani.

Did he know that the idea would work? “I didn’t know if it would work, but I believed in it. And certain eternal truths of entrepreneurship don’t change, such as focusing on the user and providing great customer experience. Along with this you have to make sure you make money and figure out the selling price, cost price and then revenue potential. I knew Internet was the future and mobile was coming. The only thing we didn’t know was the inflection point," he said.

From 1999 to 2002, he was trying to scale up the business. But at that point, there was little to no Internet penetration, there were few credit card transactions and low data connectivity. It was a hostile environment to operate in. “Hence, from 2002 to 2006, we invested in developing the ecosystem and in 2006-07 we started building the consumer business," said Hemrajani. Once the ecosystem was in place, BookMyShow.com started generating revenue.

As a person who has seen the ups and downs of running a business, Hemrajani’s advice to new entrepreneurs is that if you have an idea, you should try it out. “In our journey, we must have tried 50 ideas, of which four or five must have worked. You should not get affected by failures. You may have a good idea but policy may change; that doesn’t mean you stop trying," he said. In China, if you want to succeed, you stay close to the government. In India, if you want to succeed, you stay far away from the government, he cautioned.

Many ideas die due to lack of funding. That, however, shouldn’t put a stop to plans. “As long as there is a good idea, and you have the drive, passion, stamina and conviction to build it, money will come. Funds are easy to come now as you have the whole investment community in place, from angel investors to private equity investors, willing to raise money. Money was stuck in 2002-06," he said.

BookMyShow.com may be a successful business, but the father of a two-and-a-half-year-old son leads a frugal life, and says money is just a by-product. 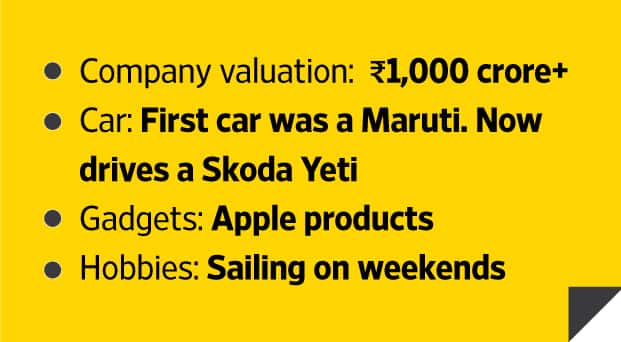