India declared 2007 as the year of broadband Internet, but seven years later it remains a nascent channel

The year of broadband

Seven years ago, the government of India declared the year 2007 as India’s “Year of Broadband". According to one report by the Telecom Regulatory Authority of India (Trai) this was because “the urgency to provide impetus to the growth of broadband is recognized at the highest level".

At the time this urgency for impetus may have seemed odd. Indian Internet penetration, in fact, was booming. In late 2007, the Internet and Mobile Association of India (IAMAI) announced that Internet penetration had leapt by 40% that year, to touch 46 million.

The problem was that the quality of these Internet connections were very poor indeed.

According to Trai data, of these 46 million users only 2.42 million—as on June 2007—had a broadband connection. And growth, at around 30,000 new connections a month, was very slow. The only thing slower was the connection itself—government policy defined broadband as an Internet link with download speed at or greater than a measly 256kbps.

Yet, change was afoot. The government, then the largest provider of wired broadband in the country, had ambitions of hooking up not just cities, but also villages.

Another key focus area was improving the speeds of connections. Then telecom minister Dayanidhi Maran said in January of 2007 that he wanted to reclassify broadband as link speeds of 2mbps or more.

Of the 213 million Internet users in India, 130 million accessed it via their mobile phones. Photo: Pradeep Gaur/Mint

Just a few days into 2014, Internet and Mobile Association of India (IAMAI) announced that 2013, in fact, had been the “Year of the Internet" in India. “The consolidated numbers taken out by IAMAI," a press release said, “affirms the fact that Internet in India is now becoming inclusive, which augurs well for the industry and society at large."

The IAMAI release appeared six months after the Department of Telecommunications (DoT) finally reclassified broadband speed—up from a paltry 256 kbps to a lightning fast 512 kbps.

In the seven years between 2007 and 2014, the Internet in India has both changed a lot and, in many ways, remained exactly the same.

And yet why does the IAMAI continue to seek out “Year of Internet" and points of inflexion?

First of all, actual broadband penetration is still very low, less than 20 million. Secondly, the Internet in India is yet to achieve the kind of cross-sector disruption that it was supposed in theory, and has achieved in many other countries in practice. E-governance has grown in fits and starts and few home-grown Internet start-ups have built profitable business models that are scalable. Meanwhile, the rural connectivity story remains an inchoate mess.

In other words for all its scale, the Internet in India remains a somewhat nascent channel of commerce, information and development. It remains a typically Indian high-potential, low-maturity sector that is too high-tech to survive without the low-tech of infrastructure development and economic reform.

Yet it has achieved enough scale and impact to unsettle the state. The great development of the last three years or so has been the Internet’s growing, if unquantifiable, role in hosting and magnifying public debate. This has led to an ongoing debate about privacy, freedom and state censorship that has broadened into debates about fundamental rights. 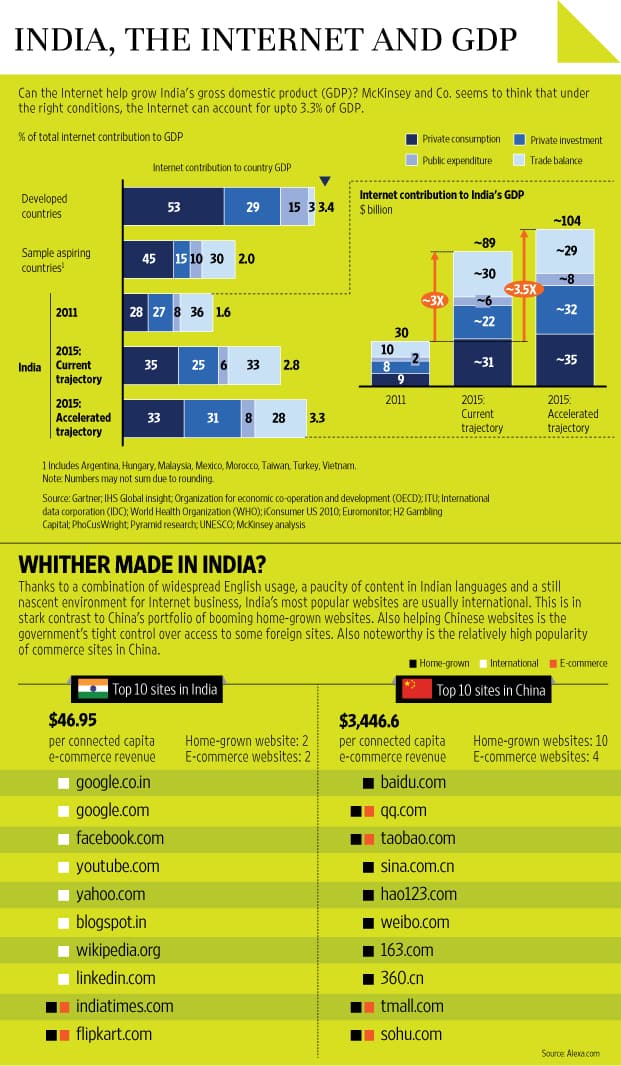