Where do the poorest Indians live?

Most of India's extremely poor can be found in Chhattisgarh, Odisha, Jharkhand, Bihar, Madhya Pradesh and Uttarakhand

Mumbai: India saw its most significant victories in the long war against poverty between 2004-05 and 2011-12. A net 137 million people, or 15% of the population, lifted themselves out of poverty, bringing down the national poverty rate to 22%.

While the pace of poverty decline varied across states, there has been some level of convergence across states over the past few years, with no stark outliers anymore. However, the poor themselves are a diverse group, and not all states have done equally well in lifting people out of extreme poverty. 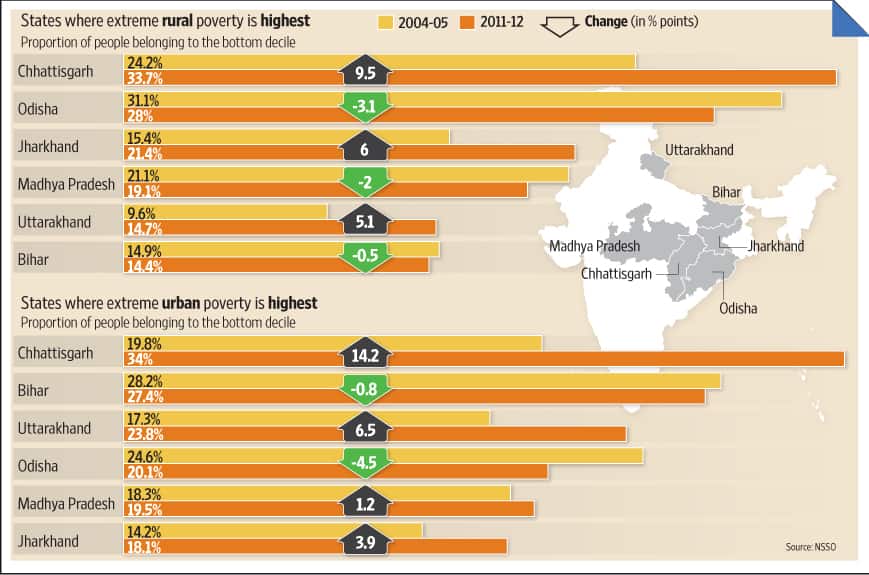 As the accompanying chart shows, states with the highest concentration of extreme poverty in rural and urban parts are the same: Chhattisgarh, Odisha, Jharkhand, Bihar, Madhya Pradesh and Uttarakhand. Most of India’s extremely poor can be found in these states.

An important caveat is that, unlike the official poverty numbers estimated by the Planning Commission, we have not made state-specific price adjustments, and used these absolute cut-offs as a rough guide to identify extreme deprivation.

The high proportion of extremely poor in states with high tribal populations is not surprising. However, the high proportion of extreme poor in a state such as Chhattisgarh, which has won accolades for its impressive social security schemes, is a bit intriguing. About a third of Chhattisgarh’s population lies below our extreme poverty line. Odisha is a close second, with a little less than a third of its people falling below the national extreme poverty line.

This is the fifth in a several-part series Mint will run over the next few weeks examining the key changes in consumption patterns across India over the past few years, based on the official statistics published by the National Sample Survey Office (NSSO). For the earlier stories, go to www.livemint.com/ruralconsumption