Even though state-run companies had a five-year head start with respect to setting aside funds for corporate social responsibility (CSR) initiatives, they lagged behind their private sector peers in terms of the efficiency of spending on such efforts.

Under Companies Act of 2013, both public and private companies had to set aside 2% of their net profits.

Earlier, public companies needed to set aside anywhere between 0.5% to 5% of net profits based on the profits of the company, according to the 2010 CSR guidelines issued by department of public enterprises.

“PSUs have taken time to evolve and they have been a bit complacent about CSR," said Vijay Ganapathy, a partner at Thinkthrough Consulting Pvt Ltd, a CSR consulting firm. Also, they are in industries where customer perception of the company does not matter as much as it does for a private company and this has led to a degree of complacency in meeting the CSR spending target, added Ganapathy. 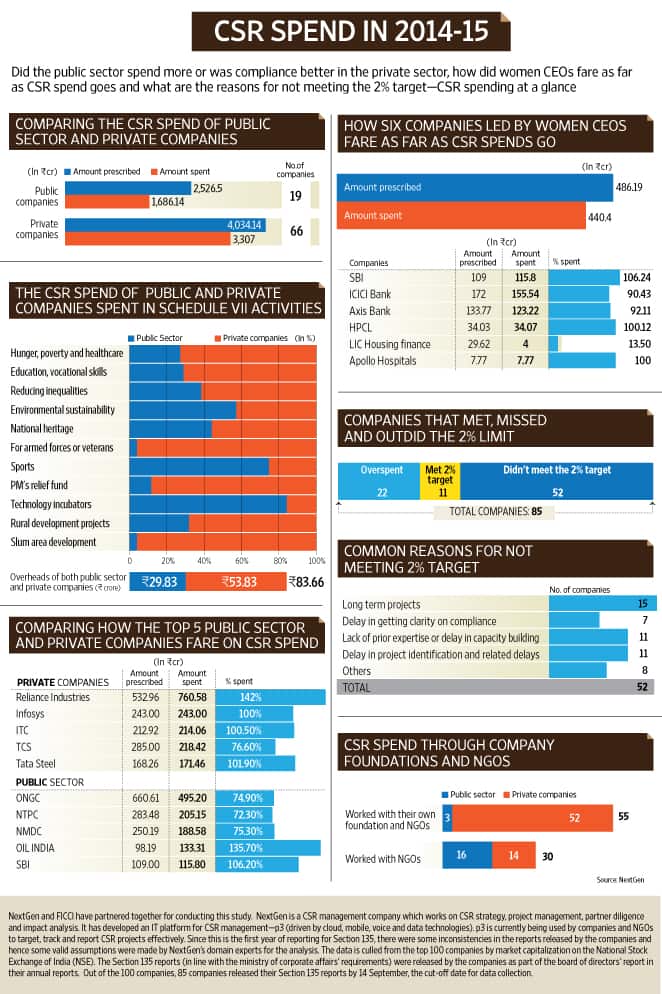 This is because many PSUs are natural resource companies and since they have a direct impact on environment, they have taken it up as a cause. “But even here, they have spent on initiatives like planting trees and water conservation, which is very basic," said Ganapathy.

The data also shows that women-led companies had a better rate of meeting the 2% spending target. Six women-led companies—State Bank of India, Axis Bank Ltd, ICICI Bank Ltd, Hindustan Petroleum Corporation Ltd, LIC Housing Finance, Apollo Hospitals Ltd—of the 85 surveyed saw their CSR spending amounting to 90.5% of what they had to spend, while the total average of the 85 companies was 76.1%.

This could be because women leaders are more mindful of corporate governance and compliance matters, points out Ganapathy.

NextGen’s data also showed that only 33 of the 85 companies spent the entire 2% of their profits or more on CSR while 52 did not meet the target in the first year after the new CSR rules were implemented. The most common reason that companies cited for not meeting the target is that they had undertaken long-term projects. This means that the amount was earmarked for a long-term initiative and the company is carrying forward the spend.

Many companies also said that they lacked prior expertise and delay in project identification as reasons for not spending.

To be sure, companies have to mandatorily disclose the reasons why they failed to meet the 2% target.

About 65% of the 85 firms surveyed used their own foundations to carry out CSR. “Companies prefer this route as you can have better control over your funds. This way you can better monitor your initiatives," said Ganapathy.