India has only 53 predominantly urban constituencies

There are 200 urban constituencies in India if we were to go by an article in the Business Standard newspaper citing so-called market watchers (http://goo.gl/Wb2rCZ). A cursory check indicates this is likely to be an overestimate.

In this edition of Election Metrics, we will use census data to check how many urban constituencies there are, and if an urban-focused strategy can work in any particular state.

For the purpose of this piece, we will use data from the 2011 Census. Since the last delimitation happened based on the 2001 Census data, it is likely that our analysis might overestimate the number of urban constituencies. However, using the most current data gives us the advantage of including constituencies that were not primarily urban at the time of delimitation but have become so now.

According to Census 2011, there were 270 million Indians aged 16 and above living in urban areas and 540 million in rural areas. The assumption here is that anyone who was 16 in 2011 would be a registered voter for the 2014 general elections (we are assuming here that anyone who is eligible for voting will enrol).

Assuming that mortality rates in urban and rural areas are identical, this implies that one-third of all voters in the 2014 general elections will be urban. However, the question is if this means that we will have (543/3 = ) 181 urban constituencies. 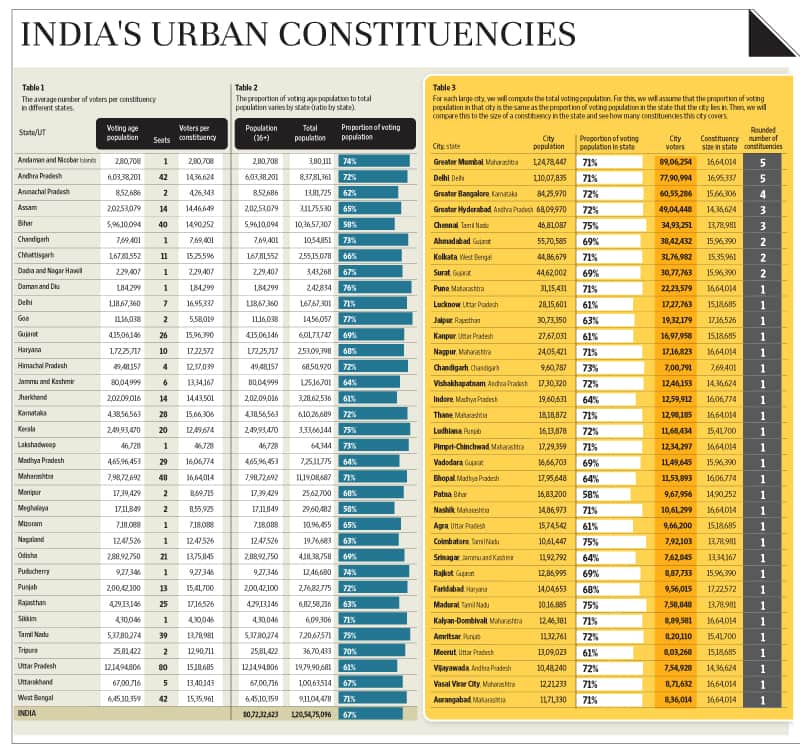 The more perceptive reader might notice that this leaves out constituencies where two or more urban agglomerations together account for more than 50% of the voters. The argument against that is that different cities are likely to have different sets of issues and so combining them is unlikely to give a unified urban vote in that constituency.

To finally get to the number we were looking for, if you were to sum up the last column (Table 3), it totals up to 53. Yes, the total number of predominantly urban constituencies in India is only 53.

Postscript: There is another way to do the same calculation. This involves going through delimitation files and noting urban agglomerations that fall under each of the 543 constituencies and then totalling their populations to find the urban component of each Lok Sabha seat.

While that might bring up a number larger than 53, it is unclear if voters in different cities will vote similarly and if they constitute a combined urban vote bank.

Essentially, urban constituencies are likely to have a greater say in state assemblies compared with the Lok Sabha.