New Delhi: The maiden railway budget of Prime Minister Narendra Modi’s government on Tuesday emphasized that while the Indian Railways will continue to fulfil its social obligations, sustaining them beyond a point will not be possible.

Railway minister Sadananda Gowda talked at length on populism but then took steps to introduce the first religious tourism trains for people belonging to all religions, including Hindus, Muslims, Christians, Jains and Buddhists. The budget also announced plans to introduce green toilets and packaged branded foods in trains. The minister announced plans to start 58 new trains, the fewest in 5 years.

The government has also tried to link small towns in Uttar Pradesh and Bihar to industrial hubs in Surat, Ahmedabad, Delhi, Mumbai, Punjab, Haryana and Jammu to facilitate the movement of labour from these two states. It also focused on passenger services including women constables, work stations in select trains, Internet facilities at major railway stations, monitoring cleanliness through CCTVs and expanding the scope of online bookings. 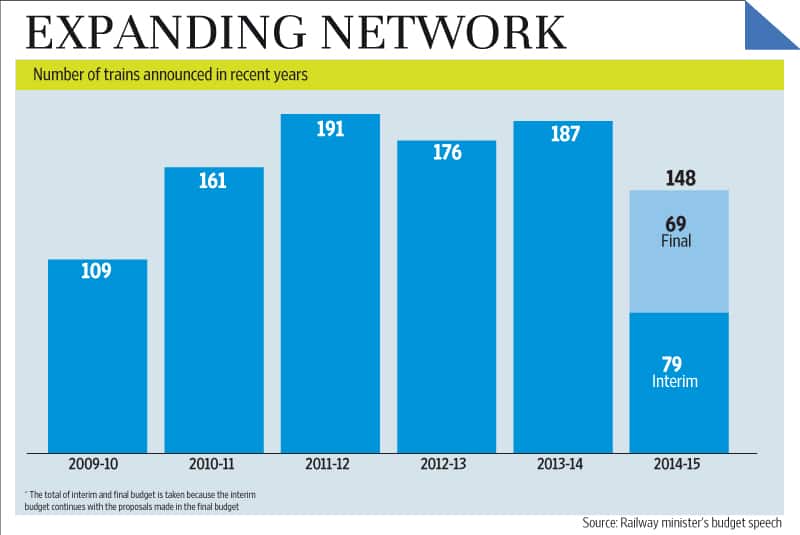 “An organization of this magnitude vested with varied responsibilities, is expected to earn like a commercial enterprise but serve like a welfare organization. These two objectives are like two rails of the railway track, which though travel together but never meet. So far, Indian Railways have managed to do tight-rope walking by balancing these twin conflicting objectives," Gowda said.

During his hour-long speech in Parliament, Gowda argued that he had refrained from announcing many new projects because Indian railways is struggling. He said the government will first focus on setting things in order.

“Compared to the railway budgets that we have seen before, this budget has not emphasized so much on populism. There are certain proposals like lady constables in trains but these are more demand-driven popular proposals which are a need of the time. He (Gowda) has craftily introduced such proposals but without over stating it in his speech," said N. Bhaskara Rao, a New Delhi-based political analyst.

Rao said that the government has refrained from making overtly populist proposals such as reducing passenger or freight fares. “While the populist efforts in Tuesday’s rail budget are not so obvious, the problem is that the minister did not provide details on a number of points," he added.

Gowda clarified that while the social obligations of the railways were not in dispute, the problem was that some projects in the past were populist in nature and did not contribute any revenue.

“This mismanagement and apathy brought railways into the situation of severe funds crunch for many years, which is a result of the ‘decade of golden dilemma’—the dilemma of choosing between commercial viability and social viability," Gowda added.