Home >Specials >The business interests of Maneka and Varun Gandhi

The business interests of Maneka and Varun Gandhi

The Maneka and Varun Gandhi family manages companies in the infrastructure and real estate, software, trading and steel sectors

The mother-and-son duo of Maneka and Feroze Varun Gandhi are attempting to win re-election to the Lok Sabha—the former from Pilibhit in Uttar Pradesh and the latter from Sultanpur in the same state. Both are representing the Bharatiya Janata Party (BJP). Along with Maneka Gandhi’s sister Ambika Shukla, they manage companies in the infrastructure and real estate, software, trading and steel sectors. While Varun Gandhi holds direct stakes in seven out of the eight companies they control, Maneka Gandhi has direct holdings in one. Detailed e-mail queries sent to Varun Gandhi remained unanswered.

Over the next month and a half, while voters elect a new government for India, Mint will profile the business interests of prominent politicians using data from the corporate affairs ministry’s database.

Click below for an interactive graphic on the holdings of the Gandhi family. 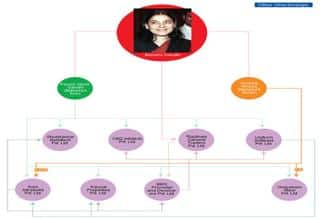