When you're playing for your country, especially in a tournament like the World Cup, absolution is harder to come by

London: Shortly after the thrilling shambles of a match that was Croatia versus Argentina, Pablo Zabaleta made an interesting point. The post-match punditry show had just screened Argentine goalkeeper Caballero’s blunder leading up to the first Croatian goal.

This is a somewhat obvious point. But it helps to remind us that international football, and World Cup football in particular, differs in so many ways from the way football is played at the club level. So much so that the World Cup might be better considered a footballing format all to itself. 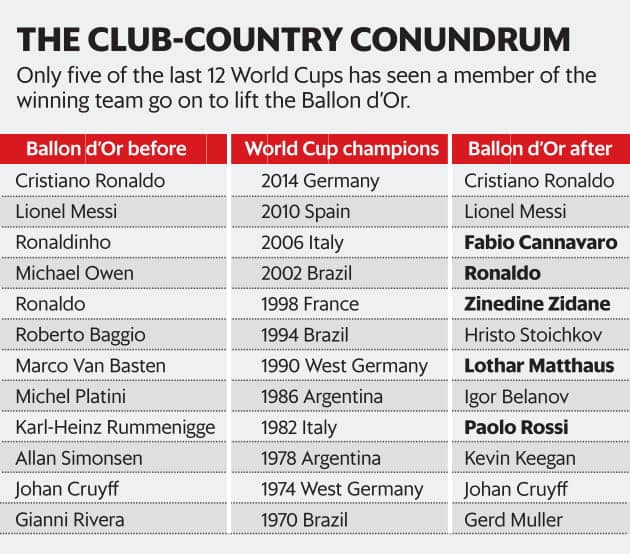 The club format, however, dominates the way in which football, especially individual performances, are studied and analysed. Seen through the prism of club football, for instance, Messi’s struggles in an Argentine jersey might seem a bit bewildering. This man has dominated world football for over a decade. Along with Cristiano Ronaldo, Messi has set the standard for what it means to be the finest exponent of the sport.

And yet, what explains Messi’s problems at the World Cup?

One problem, as Barney Ronay expertly summarized in The Guardian after Argentina’s thrashing, is misplaced expectation.

Great footballers today are manufactured in ways inimical to success at the national level: “One of the glories of international football is the enforced human variation. In the past, really talented players would often spend years playing with inferior teammates, a natural stage in the climb to the top. The top players just do not do this anymore, and are instead whisked away to some suitably elite level at a young age. Messi has played with teammates beneath his level really only when he is with Argentina and only to any great degree in the last two years. It shows."

There is little precedence in football history, Ronay insists, that should lead us to believe Messi can single-handedly elevate the Albiceleste in Russia.

How divorced is club football from international competition? Or, to put it in another way, how much does club outcomes dominate our understanding of the best exponents of the sport.

Consider the Ballon d’Or awards given to the best footballers each year. Looking at a list of the winners in the ceremonies held just before or after World Cups since 1970, two things catch the eye.

Firstly, Messi and Ronaldo’s domination of the awards to detriment of star performers in World Cups is not new. Of the 12 World Cups we looked at, only five times has a member of the winning team gone on to lift the Ballon d’Or.

This means that the awards continue to weigh individual performances at the club level even in a World Cup year.

Another, and perhaps more striking trend, is that not once has a Ballon d’Or winner gone on to win the World Cup immediately after his award.

This is a highly simplistic analysis, no doubt. But it holds up Ronay’s point. Individual performances at the club levels may not be a particularly useful metric to approach the World Cup with.

In fact, it will probably get worse with time.

Increasingly, as footballers are spotted young and carefully nurtured in laboratory environments, playing particular systems with fellow lab specimens, their ability to gel within a national team will get more and more daunting. Indeed the Ballon d’Or may increasingly prove to be a footballing pox upon the nation that wins it.