The fault in IPL match schedules

Indian Premier League (IPL), for some inexplicable reason, hardly follows a balanced schedule, as some teams finish their quota of matches way before others

In the 1982 football World Cup, West Germany beat Austria 1-0 in their final group game at Gijon, with the result that both teams qualified for the next round. Algeria, which shocked West Germany earlier in the tournament, had already played their last game (against Chile), which meant that West Germany and Austria knew at the start of their game that a 1-0 win for West Germany would send both teams through.

West Germany went ahead in the 10th minute with a goal by Horst Hrubesch. And, as The Guardian later described it, “Then … nothing happened. Realising the scoreline suited both of them, Germany and Austria effectively stopped playing. In the ensuing 80 minutes there were no shots, and barely any tackles, crosses or sprints. The game was no longer a contest, it was a conspiracy". The match was dubbed in the Spanish press as “El Anschluss", alluding to Hitler’s occupation of Austria at the beginning of the Second World War. 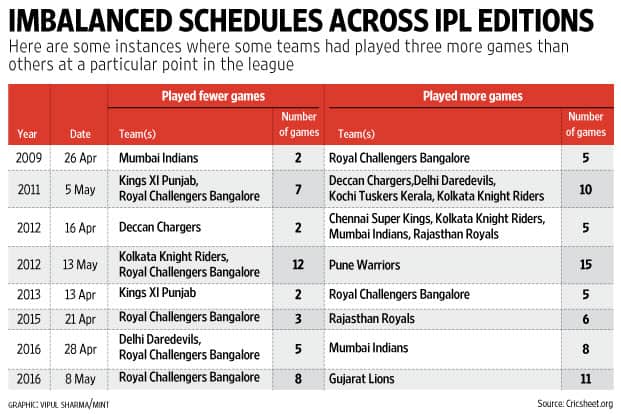 Following this, FIFA changed its rules so that in all major tournaments, the last round of games in every group would be played simultaneously. This way, teams wouldn’t know before the game of any mutually beneficial result, and thus it would prevent any collusion of the sort seen between West Germany and Austria. This rule has remained a fixture of all major football tournaments since. While it may result in lost television revenue, it will ensure a fairer league!

Cricket, on the other hand, has embraced this policy mostly in the breach. Even at World Cups, final round group games are seldom played simultaneously, and it is quite possible that teams playing the last game in their group can collude to produce a mutually favourable result. World Cup groups, however, are relatively “balanced" in the sense that at any point in time, different teams in the same group would have played approximately the same number of games.

The Indian Premier League (IPL), for some inexplicable reason, hardly follows a balanced schedule. For example, at the time of writing (Monday, 1 May, evening), Royal Challengers Bangalore have finished playing 11 of their 14 group games. Delhi Daredevils, on the other hand, have only played eight. Given that there has been no disruption in the schedule (or cancelled games), this disruption is inexplicable. It might be argued that the municipal elections in Delhi might have resulted in games not being scheduled in that city for some period of time, but there is no reason why the Daredevils could not have played more away games in this period in order to balance the schedule.

This imbalance in schedule is not a quirk of the current IPL alone—previous editions also saw such imbalances, and there is no good reason for them. The table shows a few such instances where some teams had played three more games than others at a particular point in the league.

Scheduling a round robin tournament such as the IPL is no rocket science. For sports such as chess where games of a particular round are played simultaneously, there exist algorithms that help tournament directors schedule each game optimally (chess has the constraint that at any point in time, you want a particular player to have played approximately the same number of games with black as with white). A popular algorithm (a set of tables, rather) called the Berger System is commonly used to schedule chess tournaments.

There is an added level of complexity for a tournament such as IPL, where games are played across multiple cities, and teams need at least a day’s break between games. But it is not too difficult to incorporate this in the schedule of a certain round of games scheduled using the Berger System.

In fact, it can be argued that scheduling the IPL should be an easier task than scheduling a tournament such as the English Premier League (football), where all matches of a round are played the same weekend, and with multiple teams from the same city playing in the league, constraints such as not scheduling more than one game in a city per weekend exist (this article in The Guardian explains the complexity behind making EPL schedules.)

There are several problems with the current manner of scheduling the IPL, where some teams would have played many more games than others at some point in time. Most importantly, an unbalanced schedule is unfair, since it gives some teams greater visibility on what they need to do to qualify compared to others. Teams playing their games later have a better idea of what is required than teams that finish their engagements early.

An unbalanced schedule is unfair to the opponents of teams with unbalanced schedules, too . A team that has either been knocked out or has qualified might take more risks, for example, which can have a bearing on their opponents’ chances of qualification. While this might be true of all round-robin leagues (the book Freakonomics famously talks about fixing in the latter rounds of sumo wrestling leagues), unbalanced schedules lead to more such games, making the tournament less fair.

Such a schedule can also impact players’ fitness since they might be called upon to play a large number of games in a short period of time, rather than having their workload spread through the tournament. And finally, an unbalanced schedule leads to highly misleading points tables. Royal Challengers are out of the IPL at the time of writing, but the points table show them ahead of the Delhi Daredevils—who have played three fewer games. A more balanced schedule would result in the worst performing teams figuring at the bottom of the table all the time.