India’s tryst with the Davis Cup

Mahesh Bhupathi's strategy to focus on singles matches in Davis Cup has not produced tangible results yet. But in the long run, it may be the best bet

The Davis Cup finals begin today, with France facing Belgium on home turf. India’s hopes in the 2017 Davis Cup, billed as the World Cup of tennis, was dashed when it crashed out at the play-off stage earlier this year after its loss to Canada. This is the fourth year in a row that India has faced elimination at the play-off round.

As the chart below shows, the 1960s were in some ways the golden age of tennis in the country, with a relatively high win-loss ratio in Davis Cup matches for India. 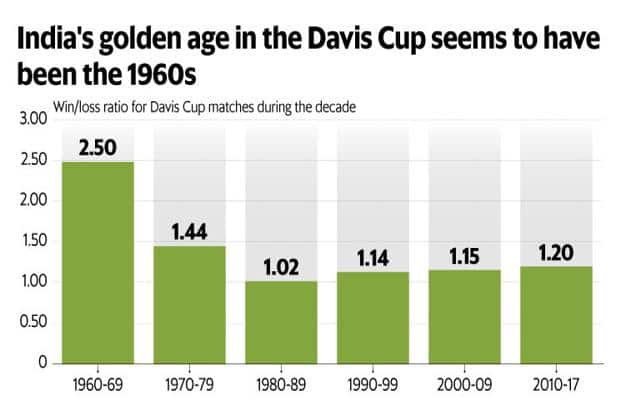 India’s win-loss ratio declined sharply in the subsequent decades before beginning to rise gradually since the 1990s. But unlike in the past, when India banked on its singles performances for its Davis Cup campaigns, India tended to focus largely on its impressive doubles duo of Leander Paes and Mahesh Bhupathi in the 1990s and 2000s. The fall in the average singles performance of Indian players also might have necessitated such a strategy.

This has begun to change under the India’s non-playing captain Bhupathi, with the focus reverting to singles. The rise in the singles rankings of Indian players over the past few years also justifies such a strategy. As the charts below show, the median ranking of top tennis players in singles has risen significantly over the past few years even though the doubles rankings still look better. 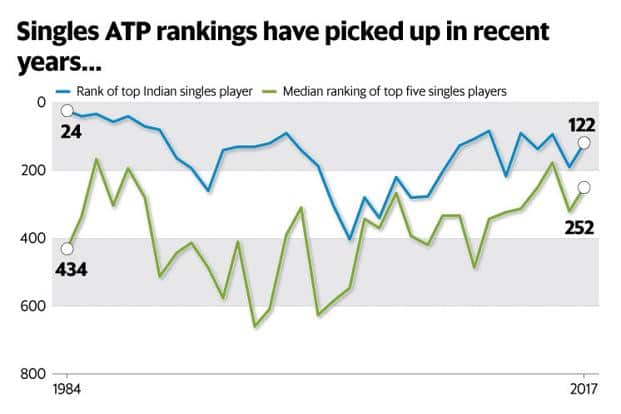 Given that singles matches outnumber doubles in every Davis Cup tie, there is no recourse but to focus on singles to mount a successful campaign. It is worth remembering that the 1966 campaign was powered by the singles victories of Ramanathan Krishnan, who won five matches that year. The 1974 performance was on the back of the impressive performances of the Amritraj brothers, who won five singles matches between them. In 1987, Ramesh Krishnan and Vijay Amritraj won nine matches between them. India only won one doubles match that year.

Bhupathi’s strategy to focus on singles has not produced tangible results yet. But in the long run, it may be the best bet.