Lionel Messi and the art of goal-scoring

In his career, the talismanic Messi has scored 602 goals: 61 for his country (Argentina) and 541 for his club (Barcelona)

Earlier this month, it was a free kick launched from a left foot that threaded a needle and sealed Atletico Madrid’s fate. On Wednesday night, it was a turn of speed and an understanding of space that crushed Chelsea. These are just two pages from the goal-scoring book of Lionel Messi, in which he pencilled in goal number 99 and 100 in the Champions League.

In his career, the talismanic Messi has scored 602 goals: 61 for his country (Argentina) and 541 for his club (Barcelona). It’s his time, feats and presence at Barcelona that have defined him—and redefined football. Here are three defining features of Messi’s craft from those 541 club goals.

He gets stronger as each half wears on 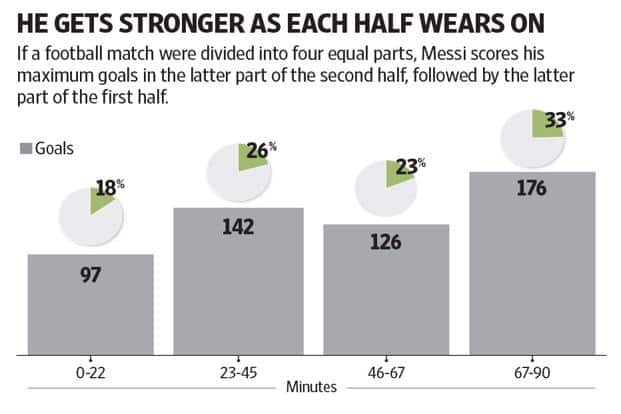 17% of his goals are self-created In Barcelona’s tiki-taka style, assists are a natural precursor to goals. Even within that system, 17% of Messi’s goals have been created by him (excluding penalties). Of the goals provided by others, 48 players have made the decisive last pass (assist) to him, and the top five is a testament to the continuity of this brand of football at Barcelona.

He doesn’t just prey on the weak Messi has scored 46% of his goals in the Spanish league against sides that were ranked in the top 10 at the time of that match. And he’s scored his maximum goals against five of the best Spanish clubs, arch-rivals Real Madrid among them.