IPL 2017: More matches are being won by teams batting second

We’re nearly halfway through the 10th edition of the Indian Premier League (IPL), and it is a good opportunity to assess how the team strategies and playing styles have evolved over the past decade.

To start with, the overall scoring rate has gone up over the years, though the increase has not been consistent. What is interesting to note from Figure 1, however, is that for most of IPL’s history, the average rate of scoring for the team batting first was higher than that of the team batting second. From last year’s edition, however, the tables have turned in favour of the team chasing. 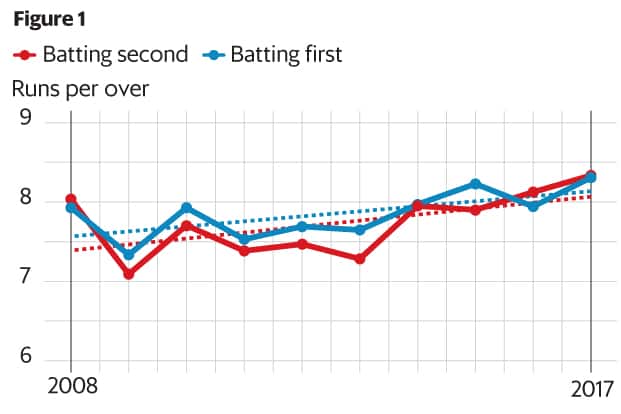 Despite the overall strike rate being higher for teams batting first, IPL has always been a chasers’ game. Barring the 2010 and 2015 editions, more matches have been won in every other edition by teams batting second (Figure 2). And team captains have adjusted to this reality of IPL being a chasers’ game, in terms of their decisions on winning the toss. In 2009 and 2010, over 60% of captains winning the toss chose to bat first, but that number has come down to less than 20% in the last couple of years (Figure 3). 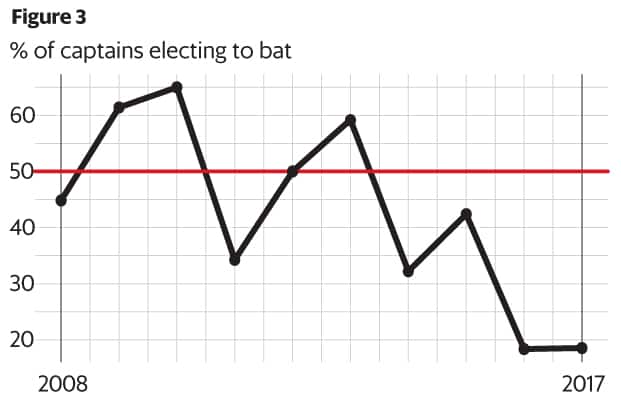 Former Mint columnist Amit Varma has hypothesized that with teams realizing that they have 10 wickets to lose over 20 overs, they are likely to become more attacking and risk-taking. Figure 4, however, suggests otherwise—the number of wickets lost per innings has come down over the years. 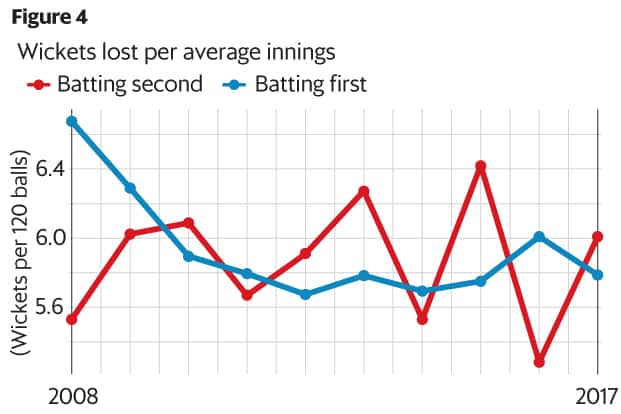 Unless pitches have started favouring batsmen more (resulting in lower loss of wickets), what this suggests is that teams have actually become more conservative in terms of their batting, which is rather baffling.

The big story of the ongoing edition of the IPL is the return of heavy scoring in the powerplay overs, a strategy that had been popular in One Day International cricket in the 1990s.

In the current edition, however, there is a clear distinction, as Figure 5 shows. Now, this increase in rate of scoring in powerplay overs has been largely on account of teams batting second, as Figure 6 shows. Even in this edition of the IPL, teams batting first score in the first 6 overs the same way as they do in the next 8.

For chasing teams, though, there is a significant difference.

Figure 6 also shows another regime change in the way the game was played starting in the 2014 edition. 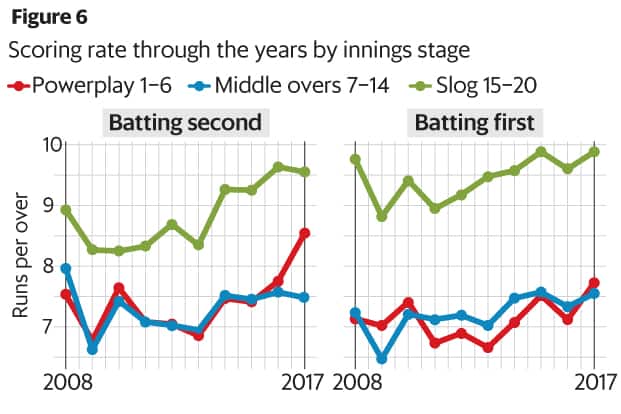 Until then, the average scoring rate during the slog overs of the chase was just over eight runs per over.

In 2014, however, that average jumped up to over nine runs per over, and has stayed there. That has had an impact on what the team batting first needs to score in order to feel safe. 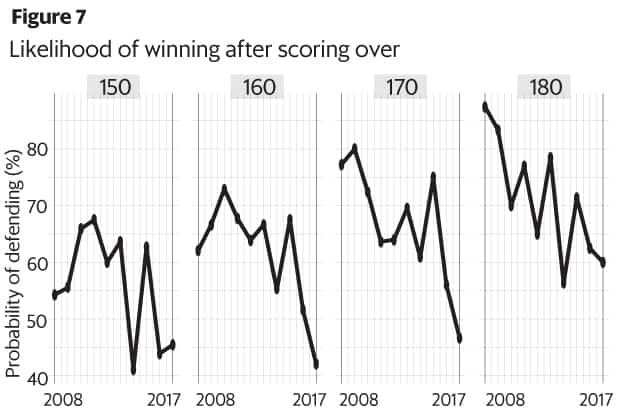 Now that the dominance of teams chasing is clear, it will be interesting to see how teams batting first will adapt their strategy over the coming editions of the IPL. Being less conservative in their approach might be a good start.