Impressions refer to the number of individuals in thousands of a target audience who viewed an event, averaged across minutes.

The numbers represent viewers above two years of age who watched the final match between Chennai Super Kings and Sunrisers Hyderabad across 17 television feeds of Star India, the official broadcast network of the T20 tournament, as well as DD Sports. 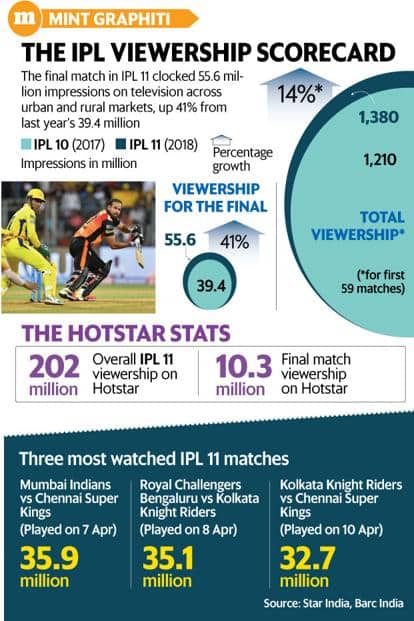 Star India had leveraged its network to make the final match at Mumbai’s Wankhede Stadium a success. The network aired the match in eight languages across 17 channels, including Star’s Hindi general entertainment channel, Star Plus and movie channel Star Gold. Apart from Hindi, English, Tamil, Telugu, Bengali and Kannada, the final was aired in two additional languages: Marathi and Malayalam.

IPL 10 was only aired in Hindi and English across the five channels of Sony Pictures Network.

“Viewership data in the beginning of the tournament was not impressive, given the huge investment Star has made. However, the decision to air the final match on its Hindi GEC Star Plus and Star Gold has paid off. Clearly, more households in India subscribe to GECs and movie channels than sports channels, which has helped the overall viewership data," said Sulina Menon, senior media expert and chief client officer at media agency OMD India.

Star India chief executive officer Uday Shankar had told Mint that the firm was expecting this year’s revenue to go up to Rs2,000 crore, compared with Rs1,200 crore that Sony Pictures Network made in 2017. Last year, Star India bought the five-year television and digital media rights for IPL for Rs16,347.5 crore.