The one cricket record list where India is missing

When it comes to umpiring, India has barely registered its presence at the highest level despite the sport's popularity in the past three decades

Indian male cricketers register a healthy presence in individual records. For example, two of the top 10 run-getters and top 10 wicket-takers in Tests, and three top 10 run-getters and centurions in one-day internationals (ODIs), among other metrics, are Indians. But when it comes to umpiring, Indians hardly register a presence at the highest level.

There’s only one Indian among the most prolific umpires in Tests: S. Venkataraghavan, part of the famed Indian spin quartet of the seventies, is ranked ninth with 73 Tests. The next Indian in this list is S. Ravi, who has stood in 30 Tests and is ranked 37. The third best is V.K. Ramaswamy, who stood in 26 Tests, and is ranked 49.

In ODIs, Indians lag even more. Venkataraghavan is the most capped Indian umpire with 52 ODIs, and he is ranked 45. Among the 10 main ODI-playing nations, only two don’t have a single umpire to have stood in 100 ODIs. Those are India and Bangladesh, and the latter made a full-time entry into international cricket 54 years after India. The thin Indian presence becomes even more conspicuous when seen against the backdrop of the leaps in popularity cricket in India has seen in the past three decades.

Over time, as in cricket coaching, England and Australia are the most prolific in umpiring, followed by South Africa, which returned to international cricket only in 1991 (chart 1).

The current composition of the ‘elite panel’ of 12 umpires who officiate in Test matches mirrors this: Four from England, three from Australia, and one apiece from India (Ravi), New Zealand, Pakistan, Sri Lanka and South Africa. One of these elite umpires is Aleem Dar of Pakistan, and he is slowly, and almost surely, advancing to rewrite the records for officiating in both Tests and ODIs. Dar has stood in 122 Tests, and is just six short of the all-time record held by Steve Bucknor of the West Indies. He has also officiated in 195 ODIs, and he’s just 14 ODIs behind the record held by Rudi Koertzen of South Africa. If he keeps going the way he is, Dar should accomplish both those milestones sometime next year (chart 2). The umpiring journeys of Dar and Bucknor are studies in contrast, and embody aspects of the generational shift that has transpired in umpiring at the very top: There is more work and a compression of careers. Bucknor was 43 when he stood in his first Test, Dar was 35. Bucknor took 20 years for his 128 Tests, Dar could match that in 16 years. Dar, 50, is young by umpiring standards. The old hands stayed long: Bucknor umpired his last Test at 58 years, David Shepherd at 64 years, Dickie Bird at 63 years. At the top level, Dar is an exception, along with Simon Taufel of Australia, who walked away from international umpiring in 2012, aged 41 years and with 74 Tests under his belt, while being widely rated as the best in the game then. 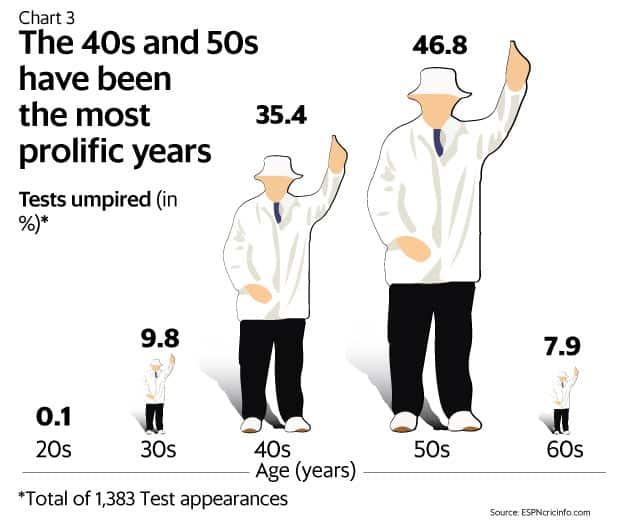 As much as the lower end of the age band is a rarity, there’s also a ceiling: 65 years. When English umpires Peter Willey and George Sharp became 65 and the English Cricket Board (ECB) called time on them, it riled them so much that they took the ECB to court for age discrimination and unfair dismissal. They lost. One thread running through the 10 most prolific Test umpires is that they were all active in the 21st Century, riding the change in Test cricket laws from both host-appointed umpires to one neutral umpire (1994) to both neutral umpires (2002). They ended up being at the forefront of imparting credibility to this thankless profession. A new paper by Nilesh Fernando and Siddharth George shows that the presence of a neutral umpire reduced bias among home umpires .

Today, elite umpires are working more, both due to more matches being played and work concentration among the chosen few. Against 36 Tests in 1993, the year before the transition to neutral umpires began, there were 47 Tests in 2017. In 1993, Dickie Bird, recognized as the best then, officiated in five Test matches. In 2017, Dar stood in eight Tests, and his workload wasn’t even the highest—Bruce Oxenford of Australia did 10 Tests. Among umpires who had done 20 Tests, those who started in the eighties registered a median career of 13 years and 27 Tests. For those who started in the 1990s, the tenure reduced to 11.5 years, but the number of Tests rose to 47—more work in a smaller time frame. But, for Indian umpires, it was another story.