Had West Germany, European champions in 1980, done their homework, they wouldn’t have taken Algeria lightly. Runners-up to Nigeria at the African Cup of Nations in 1980 and semi-finalists two years later, the Fennecs saw off Nigeria 4-1 on aggregate to qualify for the World Cup. They boasted of the talent of Lakhdar Belloumi, African Footballer of the Year in 1981, the playmaking skills of Ali Fergani, their captain, and the attacking prowess of Salah Assad and Rabah Madjer, both of whom had been named in the team of the tournament at the African Cup of Nations months earlier.

The German response to the threat was bombast from the coach—“If we lose this match, I will throw myself into the Mediterranean Sea," said Jupp Derwall—and indifference from the players, who didn’t bother to watch footage of their opponents. A tight opening 45 minutes, where the Germans controlled the tempo, was followed by the most dramatic of second halves.

In the 54th minute, Djamel Zidane—no relation to Zinedine—and Madjer combined on the right side of midfield. After streaking through the heart of midfield, Zidane stroked an inch-perfect pass in front of Belloumi, whose attempt to chip Harald Schumacher was brilliantly saved by the goalkeeper. But the rebound looped behind him and Madjer sprinted in to apply the finish with a kung-fu kick.

With 67 minutes on the clock, Felix Magath escaped down the left flank and crossed for Karl-Heinz Rummenigge to bundle the ball home. Mehdi Cerbah, who had pulled off some astonishing saves in the Algerian goal, was finally beaten. But it was the World Cup debutants that maintained their focus, and the Germans who lost theirs.

Assad lost possession inside his own half, but by the time Mustapha Dahleb got the ball back on the left wing, Assad had run 30 yards down the touchline to provide an outlet. Dahleb found him, Assad rampaged into the box and crossed for Belloumi to finish. There was no German comeback.

“We played a different style of football, a style that no one has ever seen before—it is a mixture of German, Italian and Latin American football," said the ecstatic Fergani later, while Belloumi dedicated his winner to “the Algerian people, who this year celebrated their 20th anniversary of independence from France."

As for Derwall, someone must have broken it to him that Gijon overlooked the Bay of Biscay and not the Mediterranean.

Milla, African Footballer of the Year in 1976, was 38 when he came out of international retirement at the behest of Paul Biya, Cameroon’s president. He played just 9 minutes as a substitute in the shock opening-game win against defending champions Argentina and had to wait till the 58th minute for his chance against Romania. It took him less than half an hour to leave his imprint on the competition. First, he chased a long ball, brushed Ioan Andone off the ball, and finished with his left foot. Then, following another high ball, he slipped in to thrash a second with his right foot.

In the round-of-16 tie against Colombia, he came on in the 54th minute. The game went to extra time, and, early in the second period, Milla stole into the box and beat René Higuita, Colombia’s eccentric goalkeeper, at his near post. Two minutes later, Higuita was caught in possession as he tried to dribble the ball up the field. Milla pounced and finished with characteristic calmness. Each time, he would head to the corner flag and do a little jig to celebrate.

In the quarter-final against England, he came on for the second half with the Indomitable Lions a goal down. A quarter-hour later, he had been fouled in the box. Emmanuel Kundé tucked away the penalty. Four minutes later, a deft pass from Milla released Eugène Ekéké, another substitute, who chipped Peter Shilton to give Cameroon a shock lead. It needed two penalties from Gary Linekar to spare England’s blushes, but the Milla story wasn’t quite complete. At USA 1994, he scored Cameroon’s consolation in a 6-1 rout against Russia. He was 42. 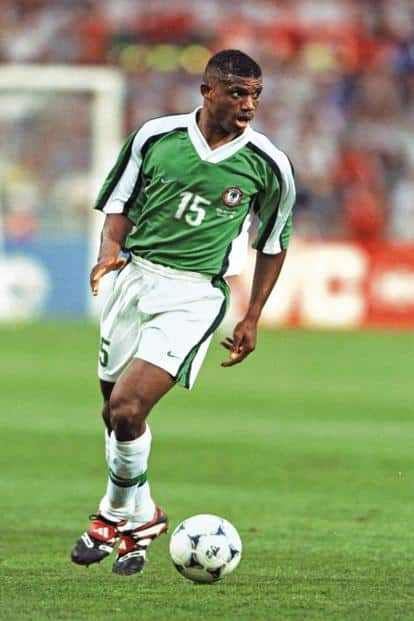 Real Madrid had won the Champions League weeks earlier and the talismans of that side were to the fore as Spain dominated the early proceedings in the first-round game in Nantes. Raúl struck the post, and a clever free kick from Fernando Hierro gave them the lead on 21 minutes. But Nigeria, who had bullied and beaten Bulgaria and Greece at the 1994 World Cup, before coming within 2 minutes of eliminating Italy in the last 16, refused to be cowed down by the stars against them.

Mutiu Adepoju’s header from a corner gave them parity 3 minutes later, and it needed a marvellous volley on the run from Raúl to restore Spain’s lead early in the second half. But this was a special Nigerian side, and we can only speculate what they might have achieved if so much of their energy and focus hadn’t been spent on bickering about salaries.

Andoni Zubizarreta, Spain’s goalkeeper, was playing his fourth World Cup and had made his retirement plans public. In the 73rd minute, his decline became apparent as he fumbled an innocuous cross-shot from Garba Lawal into his own net. Five minutes later, he was blameless as Hierro headed a left-wing throw out of the box. Sunday Oliseh was never a prolific scorer, but, that afternoon, he couldn’t have connected any sweeter.

The ball rocketed off his boot and was bulging the net before Zubizarreta was halfway through his dive. Spain didn’t make it past the first phase, while Nigeria, distracted by off-field crises, were routed 4-1 by Denmark in the second round. But memories of that epic encounter and Oliseh’s thunderbolt remain.

Subscribe to Mint Newsletters
* Enter a valid email
* Thank you for subscribing to our newsletter.
Topics
mint-india-wire 2018-fifa-world-cup
First article
Close
Recommended For You
Feedback
Select your Category
Your Message
No Network
Server Issue
Internet Not Available