Why the IPL 2017 auction was a conservative affair

The eight teams together spent less than two-thirds of their total available budget in the IPL auction, with five of the eight teams buying fewer players than required

The price tags associated with English cricketers Ben Stokes and Tymal Mills might hog the headlines, but overall, the Indian Premier League (IPL) player auction on Monday was a rather conservative affair. The eight teams together spent less than two-thirds of their total available budget of Rs148 crore, with five of the eight teams buying fewer players than they required. Several players with a high reserve price found no bidders at all. And 65% of the players were bought at their reserve prices.

At first sight, this last point suggests that there might have been some collusion—lots of players being sold at their reserve prices implies each of these players was wanted by exactly one team—a situation that can arise out of collusion. However, it is also highly likely to be a consequence of conservatism in general on the part of teams. With the number of players taking part in the auction (351) being over four times as many as the players required (77), teams had a large pool to choose from. And with the most highly sought after players already belonging to one team or another, and with teams having few free lots left, it was a buyer’s market. In effect, teams were able to carve out the metaphorical melon without much bloodshed. 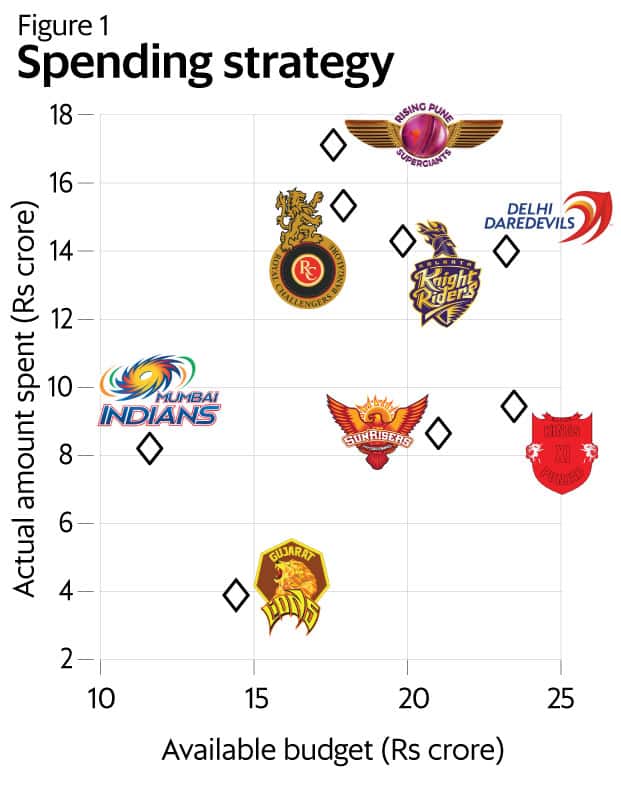 This is not to say that the auction lacked the inconsistencies that we have come to associate with IPL auctions. When the teams couldn’t agree, for example, on player allocation, they disagreed wildly. This was usually in case of players who were unique in some manner, with more than one team fighting hard to secure their services. The highest priced player was English all-rounder Ben Stokes (who was sold for Rs14.5 crore), whose strength in both batting and bowling made him highly sought after. T20 specialist fast bowler Tymal Mills was similarly coveted, and got a contract for Rs12 crore.

In fact, if we were to arrange the successful players in descending order of price, an interesting pattern emerges. Stokes and Mills, the highest paid players, together took home 30% of the total spending. The top 5 players took home nearly 45% of the spending, and the top 10 players together got nearly two-thirds of the total money spent at the auction. Figure 2 shows that while this doesn’t quite follow the 80-20 rule, the money was indeed unequally distributed among the players recruited at the auction. 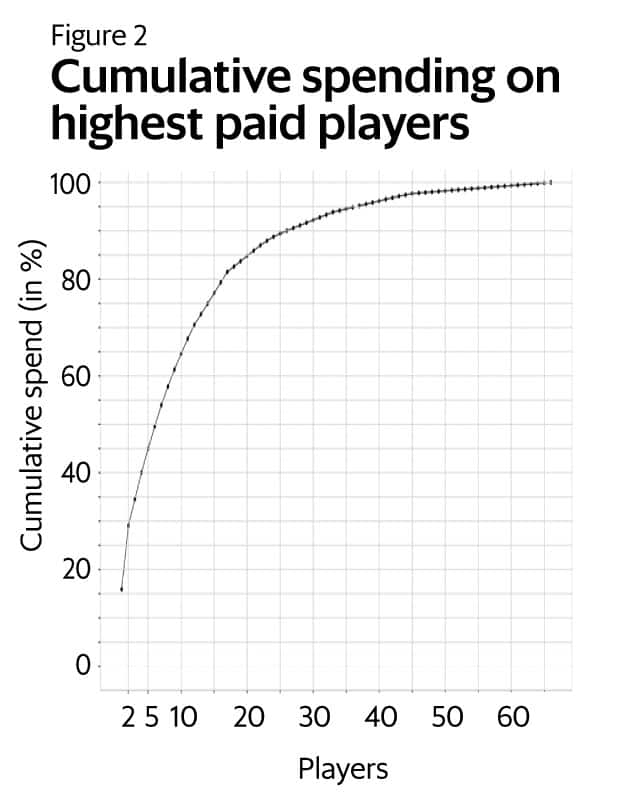 Before the auction, this column had argued that barring a few, most Indian players had set their auction reserve prices really low in order to maximize their chances of getting a deal. As it happened, no Indian with a reserve price higher than Rs30 lakh, including Test regulars Cheteshwar Pujara and Ishant Sharma, found a buyer. We had also observed that foreign players who had played last year had set high reserve prices for themselves. This strategy had mixed results, with players such as Eoin Morgan and Mitchell Johnson getting sold for exactly their reserve prices, while Jason Holder and Kyle Abbott, perhaps as a result of high reserve prices, went unsold.

Finally, we had remarked in the auction preview that while Kings XI Punjab had the maximum remaining budget; they had historically never spent their full allocation. As Figure 3 shows, they were indeed the most conservative spenders in the IPL auction, choosing to spend less than 80% of their total budget. The identity of the next lowest spender is a surprise, though, with defending champions Sunrisers Hyderabad choosing to spend only 81% of their available budget. In the case of Sunrisers, it could be argued that they won last year on account of a settled team, rendering too much further spending moot. Interestingly enough, the biggest spending team were Rising Pune Supergiants, who nearly maxed out their budget. Coming in the wake of a captaincy change, it will be interesting to see how they will perform in the tournament.