Five for four: India’s problem in the middle

When Dinesh Karthik came out to bat in the second One Day International against New Zealand in Mumbai on 25 October, he became the fifth Indian to bat at No.4 in 12 ODIs

When Dinesh Karthik came out to bat in the second One Day International against New Zealand in Mumbai on 25 October, he became the fifth Indian to bat at No.4 in 12 ODIs. Going back to the Sri Lankan tour in July-August, through the ODI series against Australia and New Zealand, K.L. Rahul, Manish Pandey, Kedar Jadhav and Hardik Pandya too have batted in this position.

The Lankan tour was the starting point of this merry-go-round. India’s policy going into the five-ODI series was twofold. One, they wanted to begin preparations for the 2019 World Cup and try different team combinations. Two, they didn’t want to leave out Rahul at the expense of Shikhar Dhawan—both of them were in good form.

Rahul batted at No.4 only once—in the third ODI at Pallekele. He scored 17 and didn’t return to the team against Australia. He is not even in the ODI squad to face Sri Lanka. 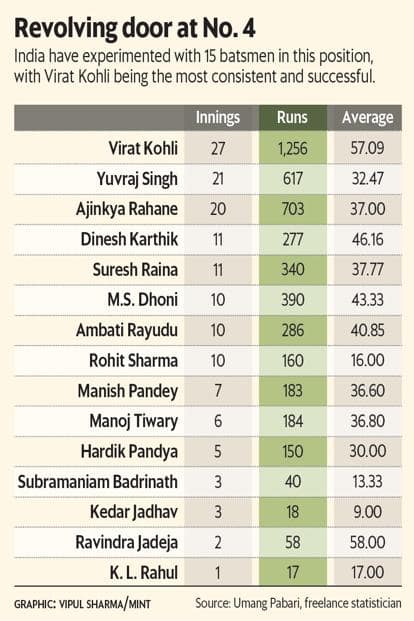 Pandey batted at No.4 in the last ODI in Sri Lanka and scored 37. This came on the back of his half-century in the previous match (at No.5). Then, he had two poor outings against Australia (both at No.4) and was demoted for the rest of the series. He wasn’t included for the New Zealand series.

Jadhav struggled against spin at Pallekele when he was first sent at No.4. Subsequently, he batted at this position twice—in the fifth ODI against Australia at Nagpur and in the first ODI against New Zealand at Mumbai. His highest score at this spot—coming in that last game—is 12.

Pandya’s case is more perplexing. The team management followed a clear policy of using him at Nos.6 or 7 and developing him as M.S. Dhoni’s successor to finish matches. When he came out at No.4 against Australia in Indore and Bengaluru, it was a ploy to attack the opposition spinners—and it worked, with India romping to a 4-1 series victory. That it wasn’t a long-term option was made clear when Karthik returned to the ODI eleven for the subsequent New Zealand series.

“The team’s nucleus is in place, so it allows us to do this experimentation for the World Cup," coach Ravi Shastri had said at the end of the Sri Lankan tour. Since then, no batsman has had a run longer than three matches at No.4. This is affecting the players—Rahul is out of the ODI reckoning for now and Pandey must wait for another chance.

“It is tough for someone used to opening, to bat in the middle order. You are used to facing the new ball but coming after 30 overs, you need to get used to the situation," said Pandey, reflecting on Rahul’s previous struggles. “It was the same for me. I am used to batting at No.4. But when I am asked to bat lower down the order, I need to modify my game."

In the 2011 World Cup, Yuvraj Singh was the last long-serving No.4 batsman. From then till the New Zealand series, India have played 157 ODIs. Fifteen players have batted at the No.4 spot (see table).

“Kohli and Dhoni are two pivots in the Indian line-up, at Nos. 3 and 5, respectively. For a long time now, the plan has been to revolve the batting around these two. It was with this idea that Ajinkya Rahane had moved down to 4 between 2013 and 2015, until the World Cup in Australia and New Zealand," says Saba Karim, a former Indian selector who was part of the committee making these changes till 2016.

Ever since Kohli assumed limited-overs captaincy, Rahane has been considered only for the opener’s role. It has rejuvenated his ODI career, and he is now firmly the third choice behind Dhawan and Rohit Sharma.

“It coincided with the return of Yuvraj Singh to the limited-overs’ set-up ahead of the 2016 World T20. Rahane struggles against spin bowling, especially in subcontinental conditions. From 2016, we had a long engagement in similar conditions so we decided to look at alternatives," explains Karim.

After the T20 return, Singh was also included in the ODI format against England in January. But the left-hander struggled in tougher conditions during the Champions Trophy in England. He is now battling fitness problems and his international future is in doubt.

Mumbai batsman Shreyas Iyer had been included in the ODI squad for the Sri Lanka series. In Kohli’s absence, he could get an opportunity at No.4 as well. If so, he will be the sixth batsman since August to bat in this position. It remains to be seen if the think tank can find a solution before the South Africa ODIs.