Maradona and memories of Mexico 1986

Diego Maradona and the 1986 World Cup have become synonymous over the years. You can’t talk about one without talking about the other. It was one man and his team, which nobody wanted, that won Argentina their second world cup title.

But more than the title match, Mexico 1986 will be remembered for the third quarter-final match between Argentina and England, on 22 June. Maradona scored two memorable goals, and Argentina won the game 2-1. The second Maradona goal was voted the “Goal of the Century" in a 2002 Fifa poll; the first one is known popularly as the “Hand of God".

Now, three decades later, Maradona, at his unapologetic best, is out with his account of the Hand of God, and how his team won the cup. An excerpt from the book Touched by God: How We Won The ‘86 Mexico World Cup:

If it had been up to the Argentines, each of us, the players, would have gone out there with a machine gun and killed Shilton, Stevens, Butcher, Fenwick, Sansom, Steven, Hodge, Reid, Hoddle, Beardsley, and Lineker. But we didn’t want to get involved in that whole mess. They were our rivals on the field—that was it. I did want to shoot some things their way, like hat tricks and nutmegs. I wanted to dance around them, score a goal with my hand, and then score another one, the second one, which would become the greatest goal in soccer history….

During the build-up to the game, everyone had the Falklands War on their mind. How could they not? The truth is that the English had killed a bunch of kids. They were guilty, but the Argentines were just as guilty, sending those kids out in Flecha tennis shoes to fight against the world’s third-largest military power. You never lose your sense of patriotism, but wanting a war is something else entirely. And if there had to be a war, at least we could have won it. I remember well when we got to Spain in ’82 and saw the first uncensored coverage of the war: it was a massacre, a pile of legs and arms, of all those Argentine boys snuffed out in the Malvinas (the Falkland Islands), while those military sons of bitches in Argentina kept telling us we were winning the war…. 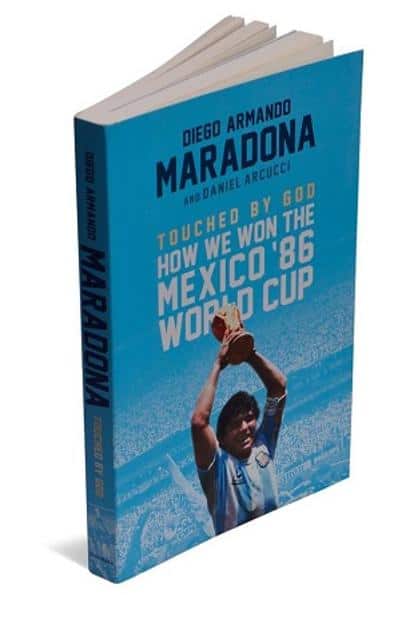 As soon as the second half started, I did what I always do, but this time for a special reason: I crossed myself. I kicked off with Valdano and we went to it. I didn’t want to waste a second. I wanted to win this game no matter what. The time had come to change history.

Five minutes was all it took….

When after crossing half the field like a forward, “El Vasco" Olarticoechea passed me the ball—that was the great thing about him, he was a defender who handled the ball like a midfielder and attacked like a forward—I started moving upfield, controlling the ball, crossing on a diagonal from left to centre, with the goal right between the eyes. It would be easy to get past them, I thought, because the English were all marking other players. I had my eye out for a blue jersey to do a wall pass—that was all I needed, because I knew that then I could go all the way on my own.

When I passed to Valdano, the ball bounced off him and went a little high, and Hodge was right next to him. So Hodge intercepted. But then Hodge made a mistake, which wasn’t really a mistake, in my opinion, because you could still back-pass to the goalie then. What he did was volley it in Shilton’s direction instead of trying to clear the ball. If Hodge had tried to clear it, the ball never would have come my way. Not ever.

But it floated down to me like a little balloon. Oh boy, what a treat...

“This one is mine," I said. “I don’t know if I’m going to make it, but I’ll take my chances. If he calls a foul, he calls a foul." I leapfrogged, which was not what Shilton was expecting. I think he thought I was going straight for him. But I leapfrogged—check the pictures—you’ll see the position my body was in.

I beat out Shilton because physically I was in the best shape of my life. He jumped, but I jumped before him, because I was watching the ball and he closed his eyes.

Shilton was used to hitting the ball with both fists and, as a result, he was sort of at a loss. If you look at the pictures, there’s a huge space between Shilton, my hand, and the ball. You don’t even see Shilton. And if you look at my feet, you’ll see that I’m already in the air, moving upward. I keep moving up, and he hasn’t even left the ground….

When I hit the ground, I went running to celebrate that goal. The ball had bounced in strong. I hit it with my fist, but it went in as if I had kicked it hard with my foot, not with my head. It hit the net and everything. It went straight in—bam!—and there was no way they could have seen it. Not the ref, not the linesman, not Shilton, who was in a daze, looking for the ball. The one who realized what happened was Fenwick, the last guy between me and the goal. But besides him, nothing, no one else. They all played it by ear, including Shilton, who didn’t even know where he was standing.

I looked over at the referee, who hadn’t yet made a call. I looked over at the linesman: same thing. And I went running off to celebrate. I decided on something they refused to acknowledge. Bennaceur, I later found out, looked at the linesman. And the linesman, a Bulgarian named Dotchev, didn’t raise his flag or come running out into the middle of the field; he left it up to the ref. Afterward, they fought over who was responsible, blaming each other.

I kept on running, never looking back. “Checho" Batista was the first one to come over, but slowly, as if he were thinking, “They’re not calling a foul—they’re not calling it." I wanted the others to come over, but only Valdano and Burruchaga did. The thing is, Bilardo didn’t let the midfielders celebrate the goals, because he didn’t want them to get tired out. But this time I needed them—I really did.

I think they didn’t want to look back toward the field, afraid that the goal would be disallowed. When El Checho came over, he asked me, “You knocked it in with your hand, right? Did you use your hand?"

And I answered, “Shut the fuck up and keep on celebrating."

Right then, I looked over at the stands, where my old man and Coco were watching. I lifted a closed fist in their direction, and they did the same thing back.

We were still afraid they would disallow the goal, but they didn’t.

I am not sorry for scoring with my hand. Not sorry at all! With all due respect to the fans, the players, the management, I am not the least bit sorry. Because I grew up with this, because as a kid in Fiorito I would score goals with my hand all the time. And I did the same thing in front of a hundred thousand people, but no one saw it...because all they saw was the screaming after I had scored. And if they screamed that loud, it was because they were sure I had scored. So how could we possibly blame the Tunisian ref?

I won a lawsuit against an English newspaper that ran the story title, “Maradona says sorry," a thought that never once crossed my mind. Not then, not thirty years later...not on my deathbed. As I told a BBC reporter, one year later, “It was a totally legitimate goal, because the ref said it was good. I’m not one to doubt a ref’s honesty, right?" I told Lineker the same thing when he was at my house in Buenos Aires, doing another interview for a British TV channel.

The first thing he asked me was, “Did you make that goal with your hand, or was it the hand of God?"

And I answered, “It was my hand, but that doesn’t mean I disrespect the English fans."

And I told him that I had made other goals that way, standing back to watch if the ref and his assistants took the bait. He realized it—he knew the deal like any soccer player would. He got why my teammates had run out to celebrate, though he also asked me about that. I told him I was the one who had called them to come embrace me, so no one would realize what had happened.

I remember him telling me that in England they would consider that play cheating, and whoever made a play like that a cheater. But I told him it was cunning, and whoever did it was clever.

That nice talk between two soccer players took place in the patio of my parents’ house in Villa Devoto.

“Because God gave us a hand. He helped us out. Because the ref didn’t see the play and the linesman didn’t either— which is rare. That’s why I said it was the hand of God."

“I blame the ref and the assistant, not you," he said. “And that second goal of yours was the first and only time in my career that I felt like applauding an opponent who made a goal against us."

I almost kissed him on the lips when he said that.

It was a dream goal. As soccer players, we always dream of making the goal of all goals… And, the truth is, for me making that goal was fantastic. And in the World Cup, incredible!….

Then he asked me again whether I felt bad about scoring with my hand, and I said that it was a game and that if the ref didn’t call a foul, that was part of the game. And Lineker accepted that; he didn’t say a word….

And I made plenty of goals with my hand, plenty. For Cebollitas, for Argentinos, for Boca, for Napoli….

I don’t understand English, but there’s something about me sticking it to them with my hand. And when they sing it, the Scots look happy.

For me, it was like stealing from a thief: it’s no crime in my opinion.

At the press conference, I didn’t know how to get out of my predicament. At first, I kept saying that I had headed it in. I don’t know—I was scared that since I was still in the stadium, they might disallow the goal. What did I know? But in passing I said to someone, “It was Maradona’s head and God’s hand." I said that thinking about all the boys who had died in the Malvinas War—it really choked me up—and I thought that “God’s hand" made me score that goal. Not that I was a God or my hand was God’s hand: that it had been the hand of God, that God had also been thinking about all those boys slaughtered in the Malvinas, and he had made that goal happen.

Excerpted with permission from Touched By God, published here by Hachette India.