Ravi Shastri’s return as a decision maker to the Indian cricket team, a year after he was removed from the position of team director, is perhaps an apt reflection of his personal and professional temperament. His dogged determination made him an international cricketer (1981-92) and his charisma gave him a career off the field as commentator—the combination of the two virtues could work well for the role of coach.

Shastri had a reasonably successful stint with the team from 2014 to 2016 when India reached the semi-finals of the 2015 ICC World Cup and the 2016 World T20 championship, besides other minor victories. This period can be divided into two—when Shastri worked with Duncan Fletcher who was coach and after the latter’s departure post the World T20 (when Shastri became a stopgap coach). 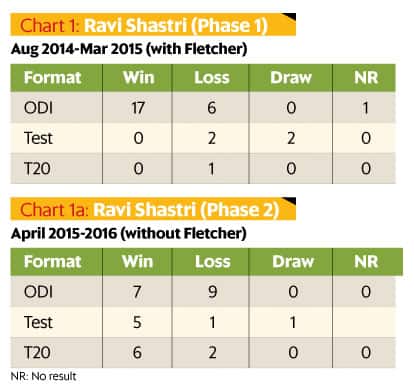 When the 55-year-old became team director in 2014, he had to motivate a team struggling after losing a Test series in England. He had a good start, as India won the subsequent ODI series 3-1.

This followed a similar template to 2007, when Shastri was summoned for a Test series in Bangladesh. This was another stopgap arrangement following India’s loss in the World Cup that resulted in coach Greg Chappell and captain Rahul Dravid quitting their positions (India won the Test series 1-0 and ODI series 2-0 but this statistic has not been included in the above chart).

Shastri’s tenure as team director ended last year when the Board of Control for Cricket in India appointed a full-time coach, Anil Kumble. The two men couldn’t be more different in terms of personality: Kumble is a studious former captain and a man of few words whose need for discipline irked India’s brash new captain Virat Kohli. Shastri is a glib, smooth-talking commentator and columnist whose impressive man-management skills came in handy when dealing with Kohli.

Statistical comparisons between the two throw up similarities—they were both given short reigns with the team but Kumble’s win percentage in ODIs is only marginally poorer than Shastri’s—68.5% vs 75%.

A comparison between the two men’s results in Tests is more complicated to gauge. While Kumble has been celebrated for his nine wins in 12 Test matches, only two of them came abroad—against lowly West Indies. The rest were in India, against New Zealand and England.

Shastri won a series in Sri Lanka 2-1 in August-September 2015, but also suffered a 0-2 loss in Australia (December 2014-January 2015), traditionally a tough country for India to visit. 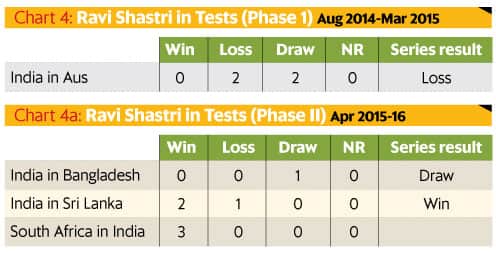 Luckily enough for Shastri, if he is a believer in destiny, his first tour for India as a full-time coach will be in Sri Lanka, starting 26 July. It includes three Tests, five ODIs and one T20 International.

To use an unavoidable Shastri cliché, he would hope success comes to him with the speed of a tracer bullet.