Thanks for Visiting Mint
You seem to have an Ad Blocker on. Please turn it off in order to continue, or whitelist Mint
HOW TO TURN OFF AD BLOCKER
OR
REFRESH IF YOU ALREADY TURNED OFF THE AD BLOCKER
Home >Sports >Football-news >How the Arrows set a trend for young footballers

How the Arrows set a trend for young footballers

Transitioning from the junior to senior level has been an age-old problem for Indian football. For the Indian players at the Fifa Under-17 World Cup, which starts in Delhi in October and will be played across six cities, the real challenge will be to build on their progress and move up the ranks once the tournament is over.

Back in 2010, the All India Football Federation (Aiff) had conducted an experiment to address just this kind of situation, one that may hold lessons for the future.

Bob Houghton, then the manager of the senior national side, saw youngsters languishing on the benches during the I-League, India’s premier football competition. He proposed an Aiff XI, where the best of this talent would play together in the second division of the I-League. And after Mahindra United disbanded the same year, this side—christened Indian Arrows—was fielded in the I-League.

“There was still a gap in the boys who were graduating from the Aiff U-19 academy. A majority of them could not make it into a professional club. Arrows was formed to bridge this gap and help them make an effective transition into professional footballers," says Mandar Tamhane, manager of the senior national team between February 2010 and March 2012.

This lot was thrown a challenge, says Shilton D’Silva, who captained the team during the second season: Gather 25 points in the inaugural 2010 season. By the end of that season, they had amassed 29 points and finished ninth among 14 teams under Desmond Bulpin.

What stood out was the performance of one player, Jeje Lalpekhlua, then just 19 and on loan from Pune FC. He top-scored among Indian players, with 13 goals. While Jeje returned to his club the following season, D’Silva decided to stick around for the game time on offer despite interest from other teams—he believed he would get more opportunities to play at Arrows than the big clubs. When the Arrows’ inspiring performance drew a sponsor in the form of the Pailan Group a year later, the team was renamed Pailan Arrows.

Under new coach Sukhwinder Singh, the Arrows finished a dismal 13th during the I-League in 2011, though they survived relegation as they were a developmental side, an experiment designed to give youngsters exposure against top teams. There was a silver lining though: C.S. Sabeeth finished top-scorer among Indians with nine goals.

Singh left too and, after stopgap arrangements, Aiff appointed Australian Arthur Papas as coach of the Arrows, and of the India U-23 side, for the 2012-13 season.

“My objective was to ensure that the Arrows were not relegated, while building a team that played a proactive, possession-style of football. This is a great way to develop young players and the pressure of the result is also important for them to build their resilience and decision making," says Papas.

What had stood out through the three seasons was that the team had no foreigners—this was a time when African imports were hogging starting XI places in most teams.

“The Arrows gave these boys 26-30 competitive matches against good opposition in a season, which is what helps a player the most," says Tamhane.

Current Indian skipper Gurpreet Singh Sandhu, who was part of the East Bengal squad at the time, was loaned to the Arrows during their debut season.

“I moved to the Arrows since all players were more or less from the same batch. That age is important for footballers and they must get to play as much as possible. During that season, I was the first player to get a call to the national side for the Asian Cup," says Sandhu.

Results didn’t matter much, since it had been decided the team wouldn’t be relegated for the first three seasons. The success of the Arrows can be gauged from the number of players who made it to the national side— Sandhu, Jeje, Pritam Kotal, Dhanpal Ganesh and Halicharan Narzary, to name a few. 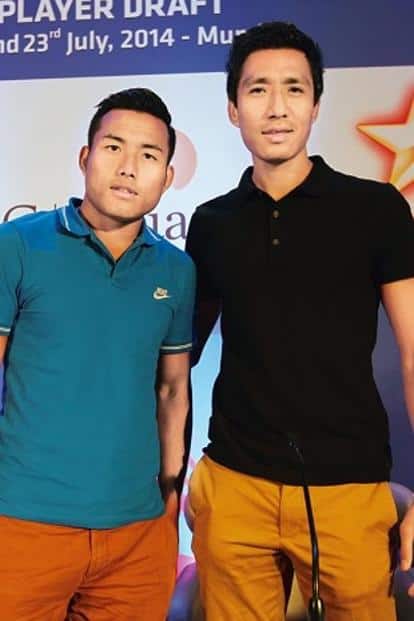 Jeje Lalpekhlua (left) and Gouramangi Singh at the players draft of the Hero Indian Super League in Mumbai in 2014. Photo: Hindustan Times.

“Many of the Arrows players are now regular senior internationals. That’s not only due to my work, but the overall concept that was established by Aiff, and the other coaches who played their part," says Papas.

Then, just like that, the club shut shop after three seasons. Aiff said it had been disbanded owing to a fund-crunch; the Pailan Group had withdrawn support. Ironically, this happened even though IMG-Reliance had signed a Rs700 crore deal with Aiff, in 2010, for investment in Indian football over 15 years.

Rob Baan, who was appointed technical director by Aiff in 2011, believes the team lost its way off the pitch.

“I can only speak from the time Papas was appointed coach. He did a fantastic job with the players, but the owners wanted the team to be able to compete with the top teams, which was totally in contradiction to the development philosophy. Young players must be given time to adapt to intense training sessions and new tactics, for instance. The team was mainly for the development of these individuals, who could easily join an I-League club after two years," Baan says.

The Aiff has plans on fielding a developmental side, similar to the Arrows, in the I-League once again this season after all these years. A few of the boys from the U-17 World Cup team will be considered for this team, in addition to players from other age groups.

The Aiff’s U-19 Elite Academy, which was started in 2013, is also a natural progression for those who show promise. A few clubs too are investing in youth, and players could be absorbed there.

And if India’s 2019 U-20 World Cup bid goes through, it will give youngsters further exposure, helping them ease into football at the senior level.

Over the years, Bengaluru FC have, for instance, tapped players such as Daniel Lalhlimpuia and Nishu Kumar, who came from Aiff’s Goa-based academy. In addition, they’ve started a residential academy at Bellary for U-15 and U-18 players.

“This is an investment worth the time, effort and money, even knowing that all players may not make the cut. Even if a few players go on to represent the first team each year, it’s a massive achievement which balances the investment. The intent should be to give good infrastructure and technical support to these youth programmes in order to reap its benefits in the long run," says Tamhane, now the chief technical officer at Bengaluru.

“What Aiff did in setting up the Arrows should be the responsibility of every club—to further nurture the boys graduating from their academies by forming a reserve or ‘B’ team," he adds. “Aiff can constitute a league which will allow these players to get competitive games."