The revolutionary in the hat: Bhagat Singh’s iconic portrait

Edited excerpts from Kama Maclean's 'A Revolutionary History of Interwar India', in which she traces how the famous photograph came to be

Kama Maclean is associate professor at the University of New South Wales’s School of Humanities and Languages. In the past decade, Maclean has worked across a range of topics related to north India, including nationalist mobilization, the politics of pilgrimage, theories of social communication and intercolonial histories.

Her forthcoming book, A Revolutionary History of Interwar India: Violence, Image, Voice and Text revisits the historiography of the Indian freedom struggle, which has been largely framed as a triumph for the Gandhian ideology of non-violence despite the fairly regular eruptions of anti-colonial violence that peppered British India in the early 20th century.

Maclean focuses on the politics of Indian nationalism from its moment of acceleration in the interwar period following the visitation of the Simon Commission, to factor in the political impact of the north Indian revolutionaries.

The following is an edited excerpt from the second chapter of the book titled “That Hat: Infamy, Strategy and Social Communication".

A Revolutionary History of Interwar India will be published by Penguin Random House India later this year.

Jawaharlal Nehru, writing in his autobiography some three to four years after Bhagat Singh’s death, intimates that Bhagat Singh was popular despite his violence. But as Nehru himself was acutely aware, as will become clear in later chapters, in the late 1920s there was no perfect consensus within the Congress movement that violence was inappropriate. Jawaharlal himself had argued, after Bhagat Singh’s arrest, that the government had no right to condemn its use when they themselves made ample use of it.

In October 1930, after Bhagat Singh was sentenced to death, Nehru pointedly commented that:

“the courage of Bhagat Singh is exceedingly rare. If the Viceroy expects us to refrain from admiring this wonderful courage and the high purpose behind it, he is mistaken. Let him ask his own heart what he would have felt if Bhagat Singh had been an Englishman and acted for England."

The widespread dissemination of the portrait in its many guises enabled a predominantly illiterate people to imagine Bhagat Singh independently of imperial allegations that he was a terrorist, and to visualise the legendary stories, songs, poems and sayings that quickly grew up around him. Disseminated widely, initially in the media, the photograph soon began to travel independent of print. Copied and distributed freely by political interest groups, the portrait proliferated and was soon to be found adorning walls and on badges, “even in villages".

Received in the intense political context of the late 1920s and early 1930s, a period characterised by ongoing post-war negotiations about political reforms, the hubris of and intense agitation against the Simon Commission, bitter memories of the traumatic imperial violence displayed at Jallianwalla Bagh, and the repression of the Civil Disobedience Movement, Bhagat Singh’s gentle gaze served to contradict British charges that he was a cold assassin, feeding rumours that he was innocent.

Those who knew of his guilt were able to forget the act of violence, reasoning that he was amply provoked by British oppression: as one Congressite argued in March of 1931, “however one may disagree with the methods used by violent revolutionaries, hatred of the British rule had gone down so deep in the Indian heart that there are few Indians who do not acclaim Bhagat Singh and others of the same school of thought as heroes".

This too has been an enduring concept; relatively recent images of Bhagat Singh frequently position him in the company of other militant national heroes (including his contemporaries Chandrashekhar Azad and Subhas Chandra Bose), collected around the memorial built in homage to the victims of the Jallianwalla Bagh massacre, the event which serves as their provocation or justification.

The infamous hat photograph was taken a few days prior to the action in the Legislative Assembly, probably around 4 April, in the studios of Ramnath Photographers at Kashmiri Gate in Delhi. Jaidev Kapoor, the Hindustan Socialist Republican Army (HSRA) member who did much of the reconnaissance and planning for the attack, arranged for the photograph to be taken.

He specifically asked the photographer to make a memento of Bhagat Singh, specifying that “our friend is going away, so we want a really good photograph of him". B.K. Dutt was photographed on a separate occasion, but with the same instruction. The first photograph he had taken did not come out, and he had to return for a second sitting which produced a portrait of Dutt gazing contemplatively beyond the frame. 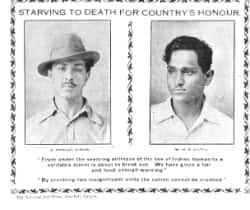 While the photographs were being developed, Bhagat Singh and Dutt were attending the Legislative Assembly on a daily basis, closely observing the debate on the Public Safety Bill; their plan was to throw the bombs at the exact moment the president of the House moved to give his ruling, which happened on the morning of 8 April. A number of newspaper reporters were present in the Assembly at the time of the bombing, as were many political notables, both Indian and British, which no doubt added to the sense of excitement with which the so-called Assembly Outrage was initially carried in the press.

At Ramnath Photographers, however, production was delayed and Kapoor was unable to collect the photographs before the action took place, as was planned. The revolutionaries did not realise that Ramnath were also contracted to take photographs for the police, and had been summoned to the police station in Old Delhi, where Bhagat Singh was taken after his arrest on 8 April 1929, to photograph him. These police photographs have not yet surfaced, but were almost certainly used in the early investigation of the “outrage", as the police “ransacked all the hotels in Delhi with photographs of the accused".

The delay in collecting the photographs put the HSRA in a difficult position, as party worker Shiv Verma explained:

“Our apprehension was: should we go for the photographs and this fellow is in league with the police, then he may hand us over ... but then we could not check our temptation. We took the risk. And Jaidev—with his finger on the trigger of the revolver standing behind—and I went to the photographer, demanded the photographs. That photographer saw me, smiled and handed over the packet to me. I made the payment. Then he brought the negatives also and said: they are no good for me, you take them also. He did not charge anything for the negatives ... that is how the photographs were procured."

Jaidev Kapoor remembered it slightly differently, eliminating Verma’s role in the collection and remembering a less congenial photographer, thus framing himself into a more daring role:

“I was afraid that Ramnath had already given information to the police, and that they would be waiting for me. I had all these concerns, but still, I had to get the photographs. So, about three days after the ‘action’, I went to the shop. At first, he stared at me, but he said nothing. I just threw the money down on the counter and took the photographs. I took the negatives too."

We might see the discrepancy between these two oral accounts as part of an attempt to reinscribe individual agency into a narrative which has become dominated by Bhagat Singh, overlooking the orchestrations of the other HSRA members. In his oral history testimony Kapoor reported that he became depressed whenever he looked at the photographs the following day. Not only was he imagining the interrogation and torture that his friends were being subjected to, but he was aghast at the early media coverage of the action, which had been resoundingly negative.

The Lahore Tribune’s editor had at the outset remarked that it was “inconceivable" that any opinion about the attack could differ from that of the Delhi police—that it was the “isolated act of mad men". The Hindustan Times, owned by the Moderate Congressite Madan Mohan Malaviya, lectured in an editorial to the perpetrators of the “diabolical deed" that they were

“doing more harm than good ... What India needs today is not so much coercion of the Government, as constructive national activity, unity, political education and a strong sanction behind national demands ... once Indians are politically conscious enough to staunchly stand up for their rights, without the raising of a little anger, without the ring of a single bomb, freedom can be attained."

It was the task of other HSRA members Shiv Verma, Sukhdev and Kapoor to turn this coverage to their advantage. The photographs would be pivotal to this. Sukhdev left Delhi for Lahore, taking with him the negatives, from which he had multiple positive photographs made.