CPI rose 5.01% in May, RBI allows banks to seize control of defaulting firms, RJD and JDU in alliance for Bihar polls

The Reserve Bank of India (RBI) allowed banks to seize control of a company if a debt recast fails, supplant the management and sell their stake in the defaulting company as soon as possible to recover dues, in one of the central bank’s most aggressive steps to rein in wilful defaulters and curb rising bad loans. This has been a long-standing demand of the banking industry. Aimed at tilting the balance in favour of lenders against wilful defaulters, the policy might be more effective as a deterrent. Strengthening bankruptcy laws should be the next logical step in the fight against rising bad loans. Ending speculation of Lalu Prasad’s discomfiture with Nitish Kumar’s chief ministerial candidature, the Rashtriya Janata Dal, or RJD, the Janata Dal (United), or JDU, and the Congress announced their alliance for the Bihar assembly elections scheduled in September-October. In a TV interview, RJD chief Prasad termed Kumar as a missile and his party as the artillery in the fight against the Bharatiya Janata Party (BJP). The reunion of former rivals Kumar and Prasad is definitely not good news for the BJP, which along with its smaller allies swept the state in the 2014 Lok Sabha elections. The benchmark Sensex has lost 5% so far in June as the threat of a weak monsoon and lingering doubts about an economic recovery this year have made investors nervous. Despite the International Monetary Fund and World Bank pitching India as one of the fastest-growing big economies over the medium term, the markets seem to be disbelieving economic growth numbers. The sluggish pace of reforms, poor corporate earnings and less-than-desired rate cuts are other factors for the slide. Large brokerages such as UBS and CLSA have slashed their year-end index targets. The government announced a Rs6,000-crore interest-free loan package to settle dues of sugarcane farmers. Sugar mills owe farmers Rs21,000 crore. While the government has dubbed it as a big pro-farmer move, mills and analysts remain sceptical. Mill owners, unable to sell sugar due to dull markets, are demanding the government buy sugar. A continuous increase in the minimum support price of sugarcane has led to an increase in production despite falling prices. India’s current account deficit for the March quarter narrowed to 0.2% of gross domestic product (GDP). A falling trade deficit and increased remittances are two key factors behind this improvement. While imports fell by 13.4% from a year ago, exports shrunk by 10.4%. The country also added $30 billion in foreign exchange reserves in the quarter, the highest since at least 2007. Analysts have warned that the current account situation might deteriorate because of rising oil prices and prospects of a deficient monsoon, which will heat up inflation. Consumer price inflation inched up to 5.01% in May, compared to 4.87% in April. Retail food inflation, however, eased to 4.80% last month from 5.11% in April. The threat of a weak monsoon could impact food price inflation in the coming months. The government’s revision of minimum support prices is also due this month. Factory output accelerated to a two-month high of 4.1% in April compared to 2.07% in March. While the manufacturing sector grew by an unexpected 5.1%, electricity output shrank by 0.5%. Consumer goods output grew by 3.1% in April after shrinking over the past couple of years. PVR, owned by Ajay Bijli, reached a deal to acquire DLF-owned DT Cinemas for Rs500 crore, reinforcing its position as India’s top multiplex operator. It will have 506 screens across 44 cities after the acquisition. This is PVR’s second acquisition, after it took over Cinemax in 2013. PVR tried to acquire DT in 2009 as well but the deal fell through in early 2010. It was estimated that PVR would have spent around Rs60 crore then. DT has been valued at Rs12.8 crore per screen, about thrice of what PVR paid for Cinemax. Sun TV Network Ltd’s shares tanked after the home ministry rejected a proposal from the information and broadcasting ministry to provide security clearance to 33 channels owned by the company. The proposal was denied on the ground that the continued airing of these channels would have an “adverse impact on economic security" of the country. The denial would not have any immediate effect on the channels’ airing, as licences would come up for renewal between 2021 and 2023. The company’s promoters are facing criminal prosecution. 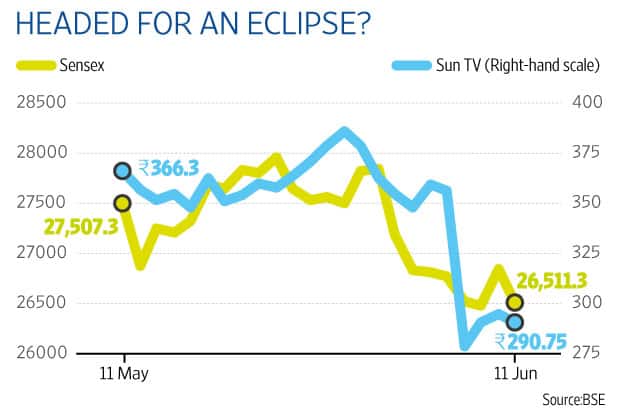 Continuing with its crackdown on non-profits and non-governmental organizations (NGOs) receiving foreign funding, the home ministry cancelled licences under the Foreign Contribution (Regulation) Act, or FCRA, of 4,470 institutions, citing anomalies and non-reporting of annual returns. Around 9,000 such licences had been cancelled in April. The list of cancelled licencees includes institutions such as the Supreme Court Bar Council and Jawaharlal Nehru University. The government has justified the action on the ground that adequate time was given for the organizations to respond. 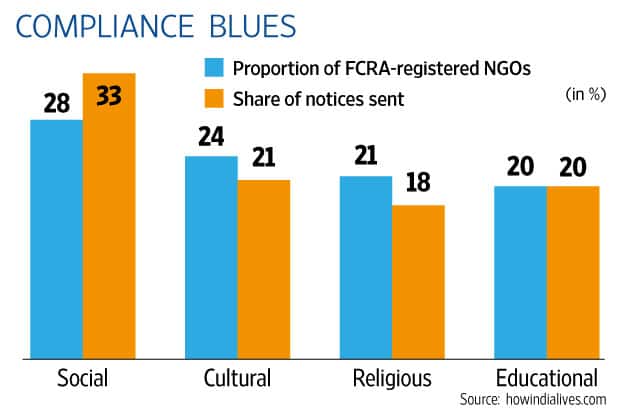 HSBC announced that it would be cutting 50,000 jobs—about one in five employees—and closing some of its operations to boost profits. The move is a part of the bank’s efforts to push through annual cost savings of $5 billion by 2017. Analysts have described the move as a reflection of the wider crisis that is plaguing banks faced with low returns and high compliance obligations after the economic crisis erupted. JP Morgan Chase announced 5,000 job cuts last month, while Deutsche Bank’s co-chief executives resigned last week. 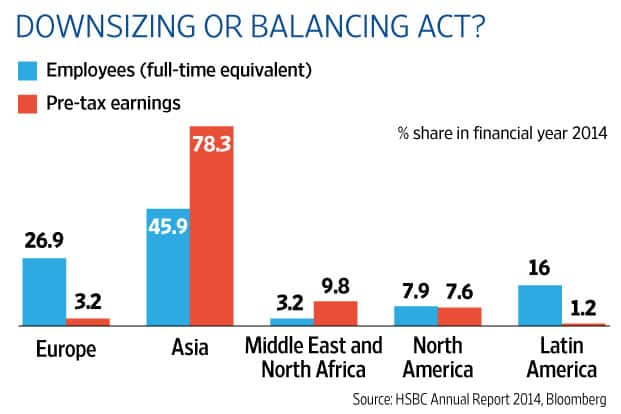