Indians are less happy than Chinese and Pakistanis, Pune is the best governed city in India but hardly world class, Messi notches up 100 Champions League goals

Finland has leapfrogged Norway to the top spot in the United Nation’s World Happiness Report 2018. Burundi replaced Central African Republic as the unhappiest country this year. India dropped 11 places to 133 in 2018, and lies below China and Pakistan. The report is based on Gallup International surveys conducted between 2015 and 2017, and ranks 156 countries. All the top countries tend to have high values for all six of the key variables that have been found to support well-being: income, healthy life expectancy, social support, freedom, trust and generosity. Pune ranked first in an annual survey of quality of governance by the Janaagraha Centre for Citizenship and Democracy, which covered 23 major Indian cities across 20 states based on 89 questions. Of the 23 cities, 12 compiled a score of less than 4, which indicated that they were “grossly under-prepared to deliver a high quality of life that is sustainable in the long term". By comparison, London and New York have scores of 8.8 and Johannesburg 7.6. About 30,000 protesting farmers from Maharashtra reached Azad Maidan in Mumbai after a 180-km, six-day walk from Nashik. Many of them were forest-dwelling scheduled tribes (ST), and Land rights under the Forest Rights Act was a key demand: they have been farming on forest land for decades, but they don’t have ownership rights, and so can’t access bank loans or damage benefits. Following their peaceful protest, Maharashtra promised to clear all their pending claims in six months. In the top 10 districts in the state by ST population, the main source of income of more than 80% of ST households is either cultivation or manual casual labour. In the backdrop of stiff competition from giant, multi-product retailers like Walmart, Target and Amazon, iconic standalone toy retailer Toys ‘R’ Us will shutter or sell its 735 stores in the US after failing to find a buyer or restructure its large debt. It is, however, looking to reorganize and sell its operations in Asia and Central Europe. Following a $6.6 billion leveraged buyout by private equity firms in 2005, the company recouped some ground, but has since struggled to boost sales. In the Fortune 500 list, its ranking has dropped from 148 in 2000 to 244 in 2017. 5. Rabada among the best in 10-wicket hauls

Kagiso Rabada tore through the Australian batting line-up again to finish with match figures of 11 for 150 and help South Africa to a six-wicket win in the second test. The fast bowler now has four 10-wicket hauls in 28 tests—the second-most among South African bowlers, after Dale Steyn, who got his in 86 tests. Among bowlers since 1970, Rabada has the second-best strike rate in 10-wicket hauls, after Muttiah Muralitharan, who is miles ahead in terms of their number. Rabada stands to miss the next two tests for disciplinary reasons in the ongoing four-match series against Australia. He struck with the right foot. He struck with the left foot. Lionel Messi scored a brace as Barcelona beat Chelsea 3-0 (4-1 aggregate) to progress to the quarter-finals of the Champions League. Messi became only the second player to cross 100 goals in Europe’s premier club competition, after Cristiano Ronaldo of Real Madrid. Among active players, the next best is Karim Benzema of Real Madrid at number six, with 53 goals. The Bharatiya Janata Party (BJP) won just one seat in the by-election results for three Lok Sabha seats and two state assembly seats in Bihar and Uttar Pradesh. Crucially, it lost both Lok Sabha seats in Uttar Pradesh for which polls were held: Gorakhpur and Phulpur, the seats won by chief minister Yogi Adityanath and deputy CM Keshav Prasad Maurya in the 2014 Lok Sabha elections.The  Bahujan Samaj Party(BSP) decided not to field a candidate and instead support the Samajwadi Party (SP) candidates—an alliance that, if extended, could have implications on the next general elections, scheduled for 2019. India’s industrial output grew 7.5% on a year-on-year basis in January, against 7.1% in December. January was the third straight month of above 7% growth in the Index of Industrial Production (IIP), though some of this might be on account of a low base, as the previous corresponding months bore the brunt of the impact of demonetisation. Still, it adds heft to the narrative that the economy might be emerging from the lower trajectory it had slipped into. In January, manufacturing grew 8.7% and electricity 7.6%; further, 16 of the 23 industry groups in manufacturing registered positive growth. 9. Retail inflation decreases to 4.4% in February

The Consumer Price Index (CPI), a measure of retail price inflation in India, declined to 4.4% in February, from 5.1% in January, helped by a fall in vegetable prices. Its December reading of 5.2% was a 17-month high, and the decline since is an encouraging sign. Even the Wholesale Price Index, a measure of wholesale price inflation, eased for the third consecutive month to 2.48% in February, after hitting a 8-month high in November. 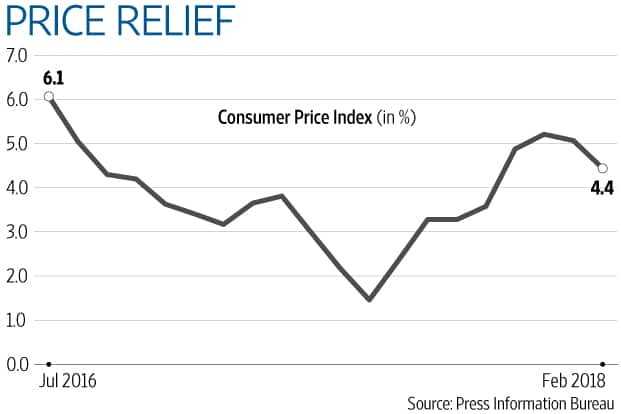 Of the 256 central public sector enterprises (CPSEs) in India, nearly one-third (82) reported losses during 2016-17. Of this loss-making set, the top 10 loss-making CPSEs alone accounted for 83% of the total loss of Rs25,045 crore, pointing to a case of selling them off while they still have some value. Leading this loss-making set were BSNL, Air India (which is earmarked to be sold in the next financial year) and MTNL. 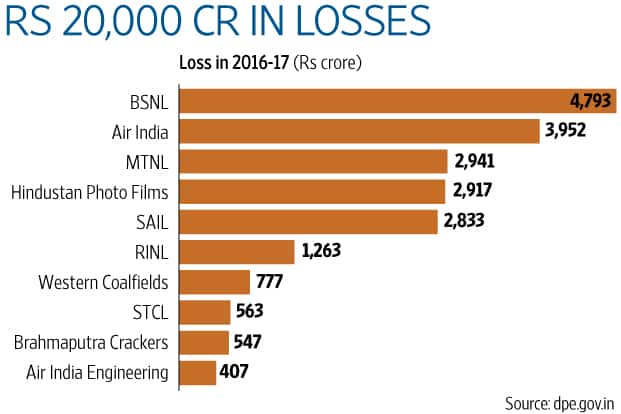