The newspaper habit, an oil merger, #43 for Federer

India's newspaper readership grew 38% in 3 years, government asks ONGC to acquire HPCL, 36-year-old Roger Federer is in the semi-finals of a grand slam for the 43rd time

The total readership of newspapers grew by 38% to 407 million in 2017, from 295 million in 2014, according to the Indian Readership Surveys of these two years conducted by the Readership Studies Research Council of India and the Media Research Users Council. All age groups registered an increase in newspaper readership. However, even as overall readership increased, that of the frequent and sticky reader—represented in the survey by a person who read a daily newspaper “yesterday"—barely expanded. In a coming together of two state-run companies in the oil sector, ONGC (Oil and Natural Gas Corp.) will acquire the government’s 51.1% stake in HPCL (Hindustan Petroleum Corp. Ltd) for Rs36,915 crore. If and when merged, the joint entity will create an oil company that is more integrated across the value chain—ONGC is into oil and gas exploration, and HPCL refines and markets the resultant products—and capable of competing better with global rivals. The money flowing into the government coffers will help it exceed its disinvestment target for 2017-18, perhaps even its fiscal deficit target. Following the deal announcement, the ONGC stock rose, while HPCL fell. Despite holding the mantle of being two of the fastest-growing economies around, India and China are currently languishing at the bottom as investment propositions due to valuations, according to a Bloomberg analysis of 20 emerging markets. Besides growth, the analysis considered metrics such as yields, current-account position and asset valuations. It said that valuations of China and India are “relatively expensive in historical terms", and that their economic growth is unlikely to be as fast as in the previous decade. Mexico and Turkey topped the list. LeBron James became only the seventh player in the National Basketball Association (NBA) to notch up 30,000 career points. At 33 years and 24 days, James is the youngest to reach this milestone, bettering Kobe Bryant by a year and 80 days. James, who started playing in the NBA at the age of 18 years, did it in the fourth-fewest games, after Kareem Abdul-Jabbar, Michael Jordan and Wilt Chamberlain. 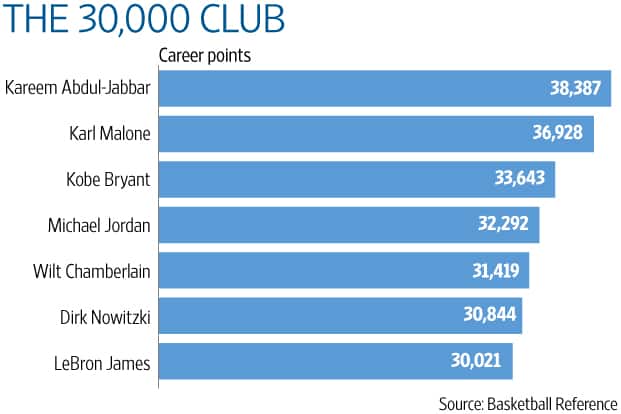 According to Counterpoint Research, Xiaomi’s shipment share in India’s smartphone market jumped by nearly three times to 25% in the last quarter of 2017, pushing long-time market leader Samsung to the second spot (23% share). The Chinese manufacturer seems to have eaten into the market shares of all its major competitors: Lenovo, Vivo and Oppo. This is the first time Xiaomi has taken the top position, ending Samsung’s six-year reign at the top. Following the announcement of yet another set of blockbuster financial results, the market capitalization of video streaming service Netflix crossed $100 billion for the first time last week. Netflix closed 2017 with revenues of $11.7 billion (a year-on-year growth of 33%), net profit of $558 million (200%) and 118 million subscribers (26%). Much of Netflix’s growth is now coming outside the US: for the first quarter of 2018, the company has projected 6.35 million new subscribers, of which 4.9 million are projected to come from markets outside the US. The government has said it will infuse Rs88,139 crore in 20 state-run banks in 2017-18. Of this, Rs80,000 crore will be raised by the government through recapitalization bonds and Rs8,139 crore will be provided as budgetary support. This is part of the Rs2,11,000 crore recapitalization plan for public sector banks announced by the government in October 2017, to be implemented over two years. The capital infusion will prop up public sector banks, which accounted for 87% of the banking system’s total bad loans as of 30 September 2017. Of the total amount in the first tranche, Rs52,311 crore will go to 11 state-run banks that have been placed under the central bank’s prompt corrective action framework. For the third straight calendar year, India’s domestic air traffic registered double-digit growth. The year 2017 saw domestic airlines ferry 117 million passengers, or a growth of 17.3%. However, they face headwinds, which could intensify in 2018, and dampen growth prospects. The 2017 growth rate is the slowest in the last three years. Also, the price of crude oil—fuel is the main cost for airlines—has crossed $70 a barrel for the first time since December 2014. 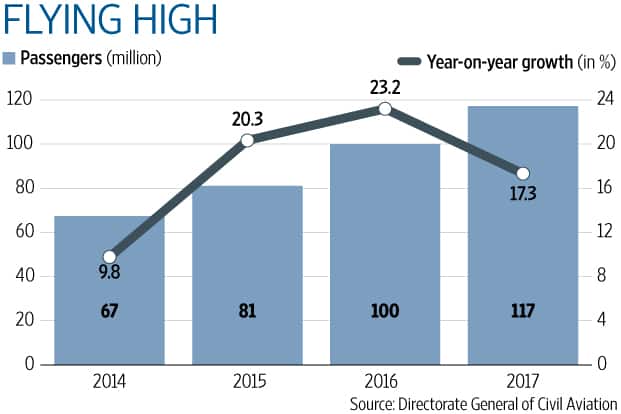