Last Sunday, Mumbai Indians won their third IPL title by defeating Rising Pune Supergiant by one run. The top performers in the final were Krunal Pandya and Mitchell Johnson. Ben Stokes won the most valuable player of the season award, while David Warner landed the orange cap award for scoring the highest runs during the season. Adani Enterprises Ltd’s fourth quarter profit was up 60% year on year to Rs221 crore. The company said that its strong performance came on the back of greater income from coal trading, mining development and operations and a rise in power-generation from renewables. Adani Enterprises’ share prices rose 0.35% to Rs113.55 on the Bombay Stock Exchange on Wednesday, while the benchmark Sensex fell 0.21% to 30,301.64 points. The union cabinet on Wednesday approved a new policy to boost manufacturing in India. Called “government procurement preference to make in India order, 2017", the policy has been planned to support local manufacturing and services and create jobs. The national procurement policy targets purchases of around Rs2 trillion a year. The programme will cover purchases by autonomous bodies, government companies as well as entities under government authority. GAIL (India) Ltd’s Q4 2017 results were below expectations on the back of higher employee costs and weak performance of the petrochemicals business. Revenues rose 15% to Rs13,452 crore, leading to a 27% increase in earnings before interest, tax, depreciation and amortization (Ebitda) to Rs1,555 crore. Nonetheless, analysts from Kotak Institutional Equities were expecting an Ebitda of Rs1,979 crore. At least 22 people, including children, were killed in a suicide bomb attack at a concert by pop star Ariana Grande in Manchester, UK. The attacker has been identified as Salman Abedi, a British-born man of Libyan origin. His father and brother have been detained by the police in the Libyan capital, Tripoli. The UK terrorism level has been raised from “severe" to “critical", the highest level, for the first time since 2007. After General Motors (GM) announced on 18 May that it would stop selling cars in India, the full extent of the losses from the move became apparent this week. Dealers have warned that around 15,000 jobs may be lost, with monetary losses amounting to crores also likely to arise from the about 18,000 vehicles in stock that are unlikely to find any buyers now. The decision to exit India is part of a larger restructuring plan where GM will also exit South Africa in order to focus on its operations in Brazil and China. Tata Motors’ March quarter results surpassed expectations, with the company recoding a 125% sequential rise in Ebitda to Rs10,846 crore. Most of the rise in profits originated from the Jaguar Land Rover, whose earnings before interest and tax rose 156% to Rs5,930.3 crore, driven by strong demand in the UK, US, Europe and China. Moody’s Investors Service downgraded China’s credit rating this week from Aa3 to A1, marking the first downgrade for China in almost 30 years. The company cited concerns over the country’s rising debt levels, arguing that economic growth could be hurt by the burden of debt on state finances. According to Bloomberg Intelligence, China’s outstanding credit rose to about 260% of the GDP by the end of 2016. 9. NYT releases list of highest paid CEOs in the US

The New York Times on Friday published a list of the 200 highest paid CEOs in the US in 2016, using data from the Equilar 200 highest paid CEO rankings. The rankings look at public companies with annual revenues of $1billion or more who filed proxy statements to the Securities and Exchange Commission by 1 May. The total compensation figures reflect both stock and cash compensation. 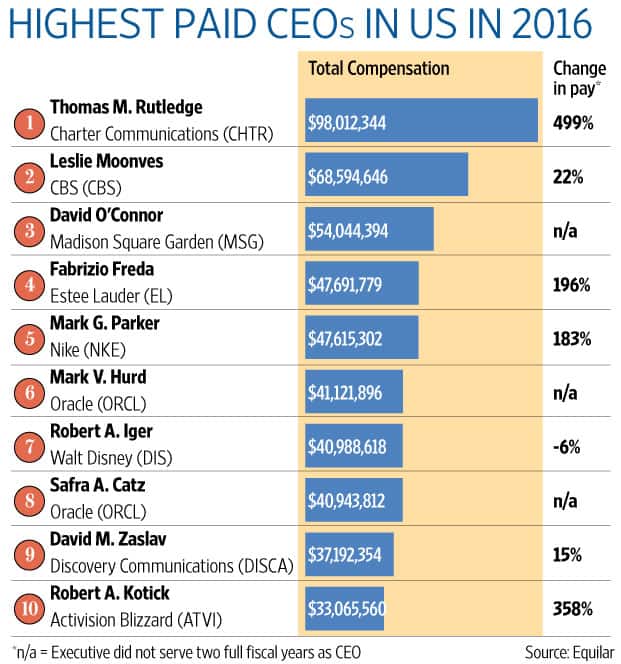 For the first time ever, India’s benchmark equity index, Sensex, crossed the historic 31,000-mark on Friday while Nifty 50 also rose 0.9% or 85.35 points to close at a record high of 9,595.10 points. Sensex closed 278.19 points higher at 31,028.21 points. The surge came on the back of a continued strong inflow of funds from domestic and foreign investors, as well as hopes over progress in reforms.