Dow Chemical Co. and Dupont Co. have announced that they will merge. The merger would be followed by a three way split of the combined entity. If approved, the deal—estimated to be worth $130 billion—would be one of the biggest mergers in corporate history. While the share price of both companies surged after reports of merger talks became public, concerns about pricing power due to lack of competition have been voiced by farmers’ associations in the US, given the dominance of both companies in agricultural markets. In India, the merger is expected to have a significant impact on the chemicals market. 2. An odd-even plan for Delhi’s vehicles

Under pressure to check hazardous pollution levels in the national capital, the Delhi government has announced a policy that will allow only odd- or even-numbered vehicles to ply on a given day from 1 January. According to the 2014-15 Economic Survey of Delhi, there are more than 8 million vehicles in Delhi, of which more than 31% are cars and jeeps. The announcement has drawn mixed reactions, forcing the government to announce that it would be run on a pilot basis for 15 days. The main challenge for the state would be to augment public transport infrastructure adequately. Republican presidential candidate Donald Trump courted controversy once again when he asked for a bar on Muslims entering the US. The remarks have drawn criticism from many including Republican Party leaders and even an official White House statement. While Trump remained unapologetic about his statement, experts have seen his remark as a calculated strategy to consolidate his right-wing base, reflected in his continuously rising popularity in comparison to his rivals. The rupee closed at its lowest level in 27 months—66.84 per US dollar—on Tuesday, amid growing concerns about foreign institutional investors pulling out of the country. Given the possibility of an increase in rates by the US Federal Reserve, uncertainties are likely to remain in currency markets. 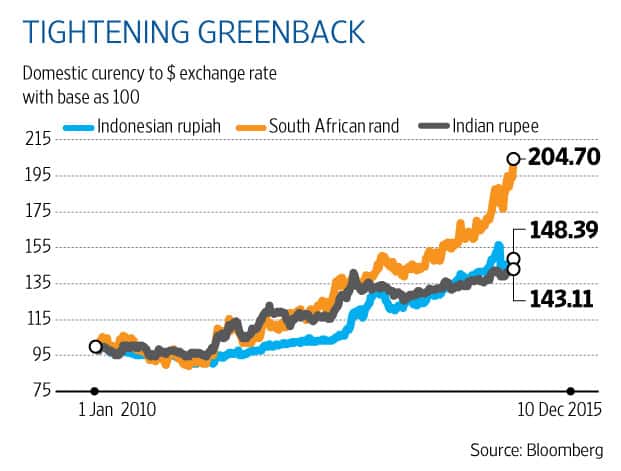 A report released by the Association of Democratic Reforms (ADR) shows that the Bharatiya Janata Party (BJP) was the largest recipient of voluntary contributions in excess of Rs20,000 made to political parties for the financial year 2014-15. The BJP’s Rs437 crore donations are more than that of all other political parties taken together, probably a result of its victory in the 2014 Lok Sabha election. These donations do not reflect the total funding received by a party, as they are only required to divulge donations in excess of Rs20,000. The Bahujan Samaj Party has not been declaring any donations for the past two years. Among donors, corporations were the biggest source of funding, accounting for more than 92% of the total donations. 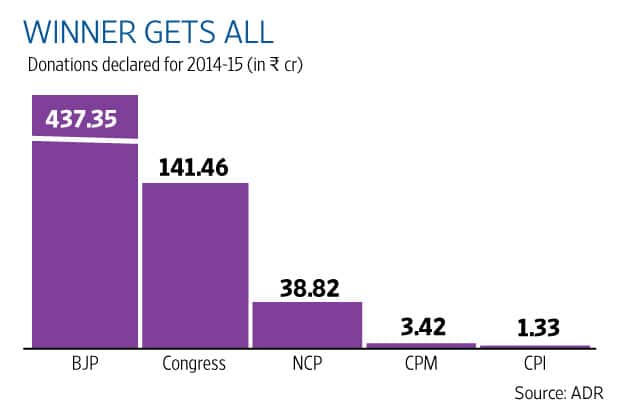 India finished the Gandhi-Mandela series in style by winning the final Test against South Africa by 337 runs to sweep the series 3-0. The victory at Delhi’s Ferozshah Kotla is India’s biggest victory by runs in any Test match. Ajinkya Rahane struck centuries in both innings to win the Man of the Match award, while Ravichandran Ashwin was named the Man of the Series for his 31 wickets in the four-match series. After the series victory, India has jumped to second place in the Test rankings. After a meeting of national security advisers in Bangkok, external affairs minister Sushma Swaraj travelled to Islamabad, signalling an end to the strategy of not talking with Pakistan. It has also been announced that Prime Minister Narendra Modi would be visiting the Pakistani capital next year for an annual South Asian summit. Swaraj announced that her visit would be followed by a comprehensive dialogue, for which the dates would be fixed by the foreign secretaries of the two countries. Swaraj also called for the removal of barriers to trade. India ranks fourth among developing countries in the outflow of illicit money, according to a report by Global Financial Integrity. The report, which has data for the 2004-13 period, estimates average annual illicit money outflow from India at $51 billion. China, Russia and Mexico are ahead of India. Figures also show that India’s global share in illicit money outflows has been increasing. The Wall Street Journal reported that if tapped, this money could have got the government $15 billion in taxes, while its seizure could have wiped out more than 60% of the country’s fiscal deficit. Finance ministry data showed a growth of 34% in indirect tax collection for the current fiscal year until November. The amount of Rs4.38 lakh crore that has been collected is more than 67% of the target set in this year’s budget. The robust collections would help the government in meeting its fiscal targets, and help it overcome the worries arising out of a less-than-expected direct tax collections. However, an increasing share of indirect taxes has also triggered concerns about the regressive nature of the country’s tax regime. Quick estimates of the Index of Industrial Production (IIP) for October show that it grew at the highest pace in five years on a year-on-year basis. For the April-October period in the current fiscal year, the IIP general index grew at 4.8%. This figure was 2.2% for the same period in 2014-15. Robust performance in manufacturing, which has a weight of more than 75% in the index, is responsible for the growth despite a decline in the mining and electricity sectors compared to 2014-15. The growth figures have beaten a survey estimate polled by Reuters by two percentage points.