The government outlined the terms for electoral bonds, a financial instrument announced in Budget 2017 for donations to political parties. These bonds will be akin to interest-free banking instruments such as promissory notes. They can be purchased from select branches of the State bank of India for 10 days each in January, April, July and October, with an additional 30-day purchase window in a general-election year. Although donors will have to comply with the bank’s KYC (know your customer) norms, their names will not appear on the bonds—in effect, while the government knows who is contributing how much to which party, no one else knows. In 2015-16, 81% of BJP’s income and 71% of Congress’ income came from unknown sources. 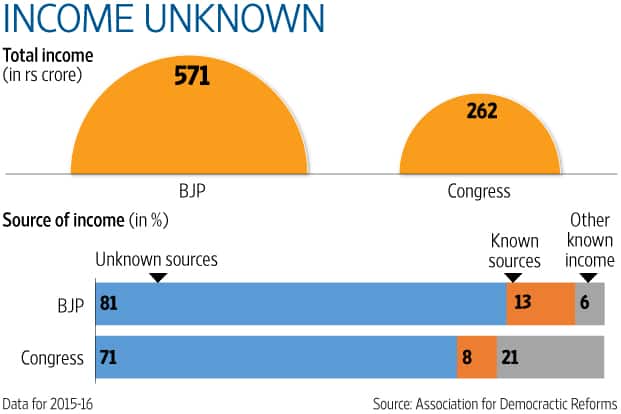 Credit rating agency Fitch Ratings has projected India’s average potential growth between 2017 and 2022 at 6.7% a year, which is the highest among its set of 10 largest emerging economies. It adds the country’s growth would be boosted by a fast-rising working-age population and labour productivity gains, and economic reforms such as GST (goods and services tax). India is followed by China and Indonesia, with an average annual potential GDP growth of 5.5% in this stated five-year period. Surprise finalists Vidarbha carved out a comprehensive win over Delhi to win their first Ranji Trophy title. They are the 19th team to win the India’s premier competition in domestic cricket, first played in 1934-35. Bombay/Mumbai lead with 41 titles, followed by Karnataka (8) and Delhi (7). In the last two decades, smaller states have increasingly challenged the hegemony of these urban-centric teams. While the first 15 years of the competition threw up 8 new winners, the next 50 years saw 6 new winners. In the following 18 years, from 2001 onwards, there have been 5 new winners, the latest being Vidarbha. Colin Munro of New Zealand became the first batsman to notch up three international hundreds in the T20 format. In the third match of the series against West Indies, the left-hander smashed 104 of 53 balls, helping New Zealand win the match by 119 runs and the series 3-0. Four batsmen have two T20 hundreds each, including India’s Rohit Sharma. So far, 30 centuries have been scored in T20 internationals, and the list of top five centurions includes two batsmen from New Zealand and two from West Indies. 5. Rajinikanth throws his hat into the Tamil Nadu political ring

On New Year’s Eve, iconic Tamil actor Rajinikanth announced he was coming into active politics with a new party that would contest all 234 seats in the next Tamil Nadu elections, which are scheduled in 2021 but could happen sooner given the political churn underway in the state. Tamil Nadu has had a history of high-profile actors joining politics, and doing so successfully. Before Rajinikanth, there were AIADMK founder MG Ramachandran and his successor J Jayalaithaa, both of whom though spent many years in the lower and middle rungs, especially MGR, before taking up leadership positions. And, when they led their party in state elections, they compiled impressive records. 6. Factory output expands at fastest pace in 5 years in December

The Nikkei India Manufacturing Purchasing Managers’ Index (PMI)—an indicator of India’s factory activity—rose to 54.7 in December. An index value above 50 indicates expansion and a value below 50 indicates contraction. This is its fastest pace of expansion since December 2012. It was driven by an increase in output and new orders, which saw their sharpest increases since December 2012 and October 2016, respectively. Job creation, too, rose at the fastest pace since August 2012. 7. Fund-raising from public equity markets in 2017 the highest ever

Indian companies raised ₹ 1,61,116 crore via the Indian public equity market route in 2017, the highest recorded in any calendar year, according to Prime Database. This is 1.6 times the amount raised in 2010, the second highest in the list. Among sub-categories, 2017 was also the best ever for the initial public offering (IPO) and qualified institutional placement (QIP) routes, from which ₹ 68,826 crore and ₹ 61,118 crore, respectively, were raised. The buoyancy is expected to continue in 2018: 15 companies have regulatory approval to raise ₹ 12,000 crore; another 10 companies, looking to raise ₹ 19,000 crore, are awaiting regulatory consent; and more filings are expected in the near future.

Crude oil prices continued to simmer, as anti-government protests continued in Iran, a leading oil producer. The price of European Brent crude hit $68 a barrel, a level it last touched about three years ago, in December 2014. Since June 20, 2017, its price has risen 54%. For India, an oil-importing nation, the recent rise in oil prices is a cause for concern, as years of tempered oil prices had created new fiscal room to channel funds elsewhere. The 30-share Dow Jones Industrial Average, the bellwether share index in the US, blasted past the 25,000 mark on Thursday for the first time. While it took 31 trading sessions to go from 23,000 to 24,000, it went from 24,000 to 25,000 in 25 sessions, in the backdrop of a sizeable cut in the corporate profit tax rate for American companies. Since January 20, 2017, when Donald Trump assumed the office of the US President, the Dow Jones has gone from strength to strength, gaining 26%. On January 2, Salil Parekh took charge as managing director and chief executive of IT major Infosys on a five-year term. The 53-year-old joins from Capgemini, where he was a member of the group executive board. In the month since his appointment was announced, the Infosys stock had gained 7% and outperformed the broad market. Since then, the gap has narrowed. Parekh stands to earn ₹ 17.3 crore in his first year ending March 2019, if he meets performance expectations. This can increase to ₹ 19.3 crore in the second year and ₹ 35.3 crore in the third year. Even so, it’s considerably lower than the ₹ 48.7 crore his predecessor Vishal Sikka earned in his first year.