Elon Musk said he had nothing to do with what was happening to it. Goldman Sachs said what was happening to it was not being understood the way it should be. Katy Perry asked Warren Buffett if it’s the real deal. It was that kind of week for cryptocurrency bitcoin. It opened Monday at about $9,570. On Wednesday, it pierced the $10,000 mark and raced past the $11,000 mark as well—an 11-fold rise in 2017 alone. As investors rushed to book profits, the beeline caused outages in online trading exchanges. By the end of Thursday, bitcoin was back to Monday levels, though amid greater volatility. The buzz about where it will go next—and the jury is still out on both directions—remains. 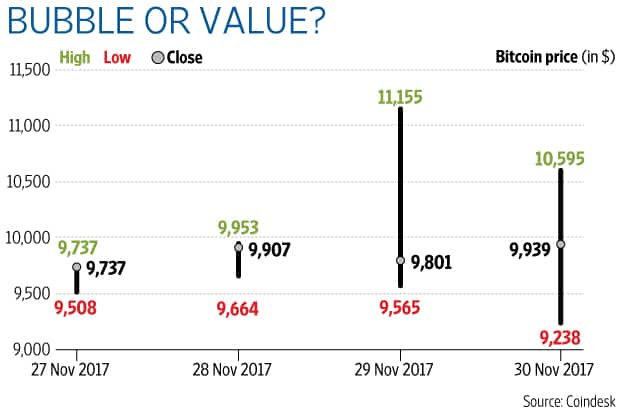 Air India has a new chairman and managing director, its third in 2017. The government on Tuesday said Pradeep Singh Kharola would replace Rajiv Bansal, whose stint at the state-run airline that is a candidate for privatization lasted just 97 days. Kharola, 56, is a 1985 batch IAS officer. His last posting was as managing director at the Bangalore Metro Rail Corporation. An engineer by education, this will be Kharola’s 24th stint since joining service in August 1987—an average of 461 days per stint. Before Bansal, Ashwani Lohani had a tenure of 723 days, and Rohit Nandan of 1,469 days, as Air India CMD. 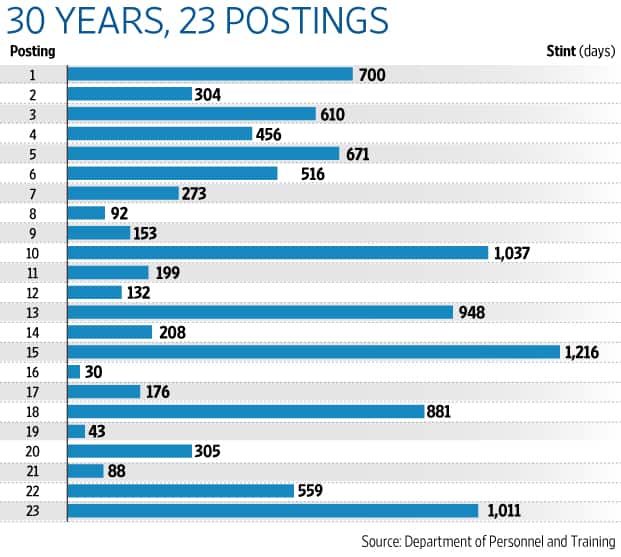 3. Delhi ranks worst among 19 metropolitan cities in terms of crimes against women

Yet again, Delhi came out as the worst city—among 19 metropolitan cities with a population above two million—for women to be in. The Crime in India report for 2016, released by the National Crime Records Bureau (NCRB), showed that, in absolute terms, the number of cases of crimes against women that Delhi recorded was 2.7 times that of Mumbai, four times that of Bengaluru, and eight times that of Kolkata. Adjusted for population, too, the picture remained just as bad: Delhi leading, followed by Lucknow, Jaipur and Patna. 4. Pace of GDP growth rises after five quarters of decline

The economy of India grew at the rate of 6.3% in the second quarter (July-September) of 2017-18. This is an uptick from the 5.7% recorded in the previous quarter, which was the lowest in three years. It also ends a five-quarter decline, and is being seen by economists as a sign that the possible adverse effects of last year’s currency ban and the roll-out of GST (goods and services tax) on businesses might have played out. The economic activities that grew above 6% in the quarter were manufacturing, electricity, gas and water supply and other utility services; and trade, hotels, transport and communication and services related to broadcasting. 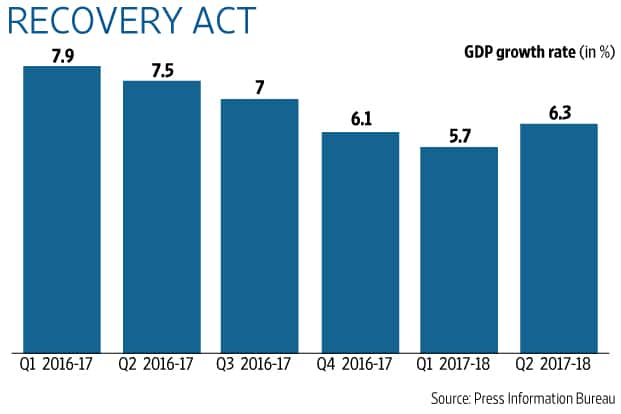 The 30-share Dow Jones Industrial Average, the benchmark share index in the US, closed above 24,000 for the first time in its history on Thursday. On 18 October, it had crossed 23,000 for the first time. The latest highs comes in the backdrop of the US economy growing above 3% for the second straight quarter in the July-September period, as well as news that the Donald Trump administration was planning to cut corporate taxes. Ever since Trump was elected on 9 November 2016, the Dow Jones has gained 5,940 points, or about 33%. 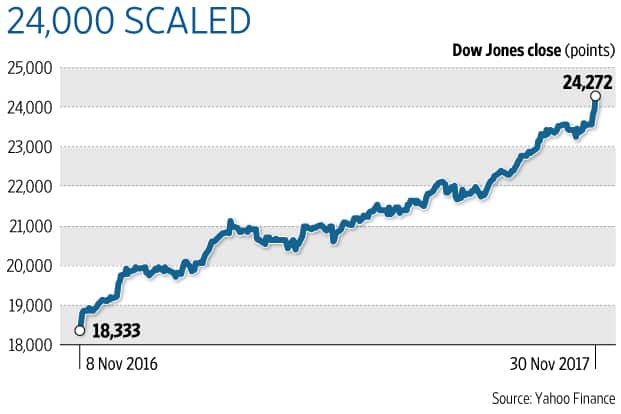 The net worth of Amazon founder Jeff Bezos crossed the $100 billion mark after the online retailer’s shares jumped 2% on Black Friday (the day after Thanksgiving Day in the US that is regarded as the beginning of the Christmas shopping season) sales optimism. However, during this week, his net worth fell and was at $98.4 billion on 29 November. The world’s richest man has added over $33 billion in net worth in the past year, the most among the top 100 in the Bloomberg Billionaires Index. The next best is Chinese real estate magnate Hui Ka Yan, whose net worth has increased by $28.6 billion in the past year to $36 billion. 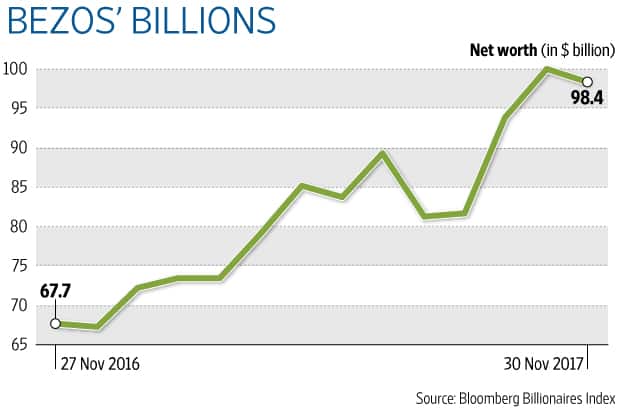 France beat Belgium 3-2 to win the 2017 Davis Cup. For Belgium, world No. 7 David Goffin won both his matches, but those were the only points his team could manage in the tie. This was France’s first title since 2001. Overall, this is France’s 10th title, bringing it level with Britain in title wins. Only the United States (32) and Australia (28) have more titles in the premier team competition in men’s tennis. So far, 22 nations have played the finals of the Davis Cup. US has the maximum number of appearances (61), followed by Australia (47). India has reached the finals thrice, but never won. 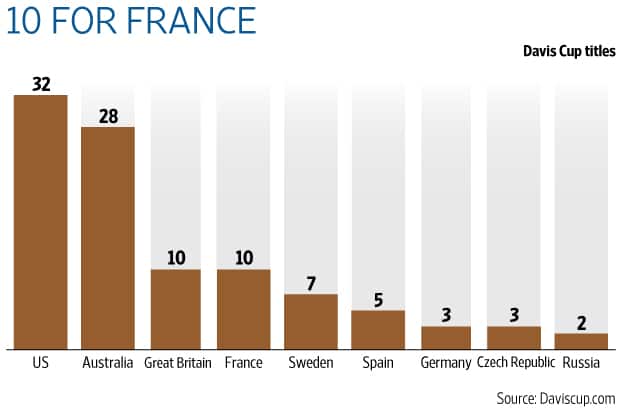 Indian off spinner Ravichandran Ashwin became the fastest bowler to take 300 Test wickets, reaching the milestone in 54 tests, as India routed Sri Lanka in the second Test in Nagpur. This record was previously held by Australian fast bowler Dennis Lillee, who reached this mark in his 56th test, in 1981. In all, there are 30 bowlers, including five Indians, who have taken 300 Test wickets. Among them, Ashwin is the second-fastest in terms of time taken since debut: six years and 18 days. The best on this count is Shane Warne, at exactly six years. 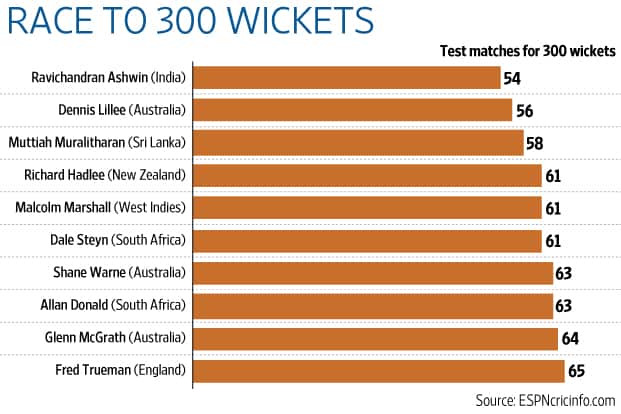 Jet Airways has expanded its partnership with Air France-KLM. The new agreement will effectively connect 44 destinations in India with 106 destinations in Europe. It will improve connecting opportunities via Paris (an Air France hub), Amsterdam (a KLM hub) and Delhi, Mumbai, Chennai and Bengaluru (Jet hubs). At present, in terms of passengers carried to and from India, Paris and Amsterdam are ranked two and three, after Frankfurt, among mainland European hubs. Egg prices, which had spiked about 10 days ago, have since declined to previous levels. Between 1 and 19 November, the price of 100 eggs in Delhi had shot up from Rs455 to Rs567—an increase of 25%. The increase was attributed to, among other things, the onset of winter and higher prices of vegetables forcing people to substitute them for eggs, which pushed up the latter’s price as well. On 30 November, the price of 100 eggs in Delhi was back at Rs450. 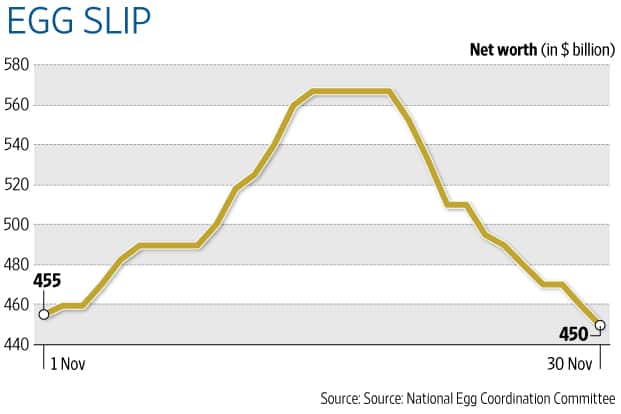