Being a Parsi priest in Hong Kong

Homyar Nasirabadwala, one of the few full-time Parsi priests working outside India, talks about his community, traditions and making sure the dhansak is right

In a small, air-conditioned room in Hong Kong’s busy Causeway Bay area, behind a framed, larger-than-life portrait of Parsi merchant Jamsetji Jeejeebhoy, there is talk of dhansak.

Homyar Nasirabadwala is speaking of the fortnightly dinners organized on the middle floors of the Zoroastrian Building for the city’s 200-odd-strong Parsi community.

Resident priest Nasirabadwala, 62, explains that there are two chefs from India—one of them Parsi—who live and work in this building. They organize the lavish multi-course dinners dished out. Around 40 or 50 Parsis show up on each occasion.

There are no Parsi restaurants in the city, but here, lagan nu custard, patra ni machchi, and sali boti are all on the menu. “We love to eat and drink," he says.

Do the chefs make a mean dhansak? “Of course," he says. “They wouldn’t be here if they didn’t."

Nasirabadwala is that delightful man of god with a devilish sense of humour. A slim gent in a black topi and a collared T-shirt, he is sitting behind a desk that has a copy of the weekly community newspaper, the Jam-e-Jamshed, and a Zoroastrian calendar. 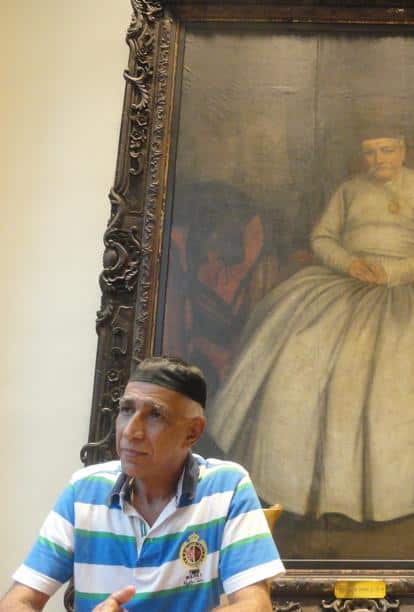 Homyar Nasirabadwala is that delightful man of god with a devilish sense of humour. Photo: Bhavya Dore

Nasirabadwala is a transplant from Mumbai and one of a handful of full-time Parsi priests working outside India—there is one in London and perhaps one or two in Pakistan. The diaspora in other countries, such as the US and Canada, usually has other professionals who help out with priestly duties on a part-time basis.

On the fourth floor hall of this building, bearing a prominent image of the Faravahar, the religion’s symbol, he looks after a fire temple—more a prayer hall really—and attends to other tasks of the Association. He administers to the spiritual needs of the community, oversees religious functions and works on creating a broad awareness about the community in the city.

Nasirabadwala has been here since 2009, when the previous priest left to return to India, taking on the duties of a full-time priest for the first time. He had earlier been ordained as a 12-year-old, working part-time before leaving his corporate job and moving to Hong Kong.

There was an advertisement in the Parsi papers from the Incorporated Trustees of the Zoroastrian Charity Funds of Hong Kong, Canton and Macao, seeking a priest for the city. He wrote in and got the job.

Since he arrived, he has officiated at two weddings, four navjotes (a ceremony of induction into the community), two purification ceremonies for new mothers and 10 funeral services.

“This is a big responsibility," he says. “It requires all my attention and I am on the job 24/7."

The Parsi community in Hong Kong has always been slight in numbers but massive in impact. Businessman and philanthropist Hormusjee Nowrojee Mody helped found the Kowloon Cricket Club and made an important donation to get the Hong Kong University up and running.

In 1888, Dorabjee Naorjee Mithaiwala founded the major ferry service, the Star Ferry, connecting two of the islands. Two Parsis were part of the original group that helped set up the Hong Kong and Shanghai Bank.

By some accounts, exchange between the Chinese and Zoroastrians from Persia go back to the sixth century, when Zoroastrian merchants traded with the Chinese empire. There is even some evidence of fire temples having been set up in parts of China.

But modern-day connections came with the advent of the British Empire, and Parsi merchants began arriving in east Asia from India in the 18th century, moving through Canton, Macau and Shanghai and flourishing in the spices, silk, opium and tea trades.

Though there were some that continued to stay in China, almost nothing of the community remains now on the mainland.

In Hong Kong, on the other hand, the dwindling community has managed to keep the spirit of the faith alive. “It all depends on the community and the people," says Nasirabadwala. “They wanted someone and had the resources."

In Hong Kong, the Parsis have had their own cemetery since 1852—rather than the traditional method of disposal via the towers of silence—where 194 people have been buried and the first grave goes back to 1858.

Nasirabadwala explains that the rituals he performs are virtually unchanged; the same prayers are uttered, and the body washed. The dog of the cemetery caretaker is pressed into action for “sagdid", or the ritual of relying on a dog to reconfirm that the body is indeed dead. The only difference is that, here, other Parsis volunteer as pall-bearers in the absence of professional ones.

At navjotes, the tradition of sipping nirang, or consecrated bull’s urine, is not in practice here. Instead, pomegranate juice is given to the children.

The prayer hall has a fire burning all hours of day and night; a slight flame stoked by sandalwood in a room surrounded by portraits of the prophet. It is what is described as an “Atash Dadgah", since it hosts a “grade three" fire, or one that has not been consecrated (most of the ones outside Iran and the Subcontinent are Atash Dadgahs).

Non-Parsis are allowed in this space. “It is a bit more liberal," he says.

Like everyone else in the community, Nasirabadwala is also concerned about the declining numbers of Parsis worldwide. “We know it is a worrying factor," he says. “We are encouraging young people to get married early. There might be a change in later years."

But whatever happens before that, there will be dhansak. Last month, there were celebrations for the 100th birthday of a Parsi resident of Hong Kong. The twice-monthly dinners will continue.

The bar is stocked and the kitchen staff is busy preparing. “We joke that in the Parsi community there is no fasting, only feasting," he says. “We go all out."

When asked about the highlights of his time in Hong Kong and what he will remember when he returns to India, he pauses to think for a minute. “The vibrancy and tolerance of the city," he says.

Oh, and one other thing: the “dim sums".