The Yeti hunter of Mussoorie

Daniel Taylor spent a lifetime trying to discover the mythical creature of the Himalayas. His findings are out in a new book.

It is a question that has troubled mountaineers, explorers, scientists and believers for years: is the yeti for real? Many cultures around the world tell stories of their own yeti—from Bigfoot or Sasquatch in North America, to the bun manchi in Nepal and me tay in Tibet... to Tintin comics.

Each had their own explanation, each culture as convinced as the other of its existence. Here was a savage creature that roamed the high mountains, in the realm of ice and snow, always elusive but appearing just often enough to keep its legend alive.

On a rainy day in July 1956, Daniel C. Taylor—then a restless 11-year-old—sought to pocket a cake on the sly from his grandmother’s kitchen cabinet. As he sneaked past the living room in their home at Mussoorie, he came across a photograph in the Kolkata edition of The Statesman.

This was the iconic image shot by British explorer Eric Shipton five years earlier, which is today an integral part of the “yeti files". It showed a giant footprint in the snow, about 13 inches in length measured by the head of an ice axe. The cake was soon forgotten.

It piqued the curiosity of a child, which soon transformed into a fascination that Taylor passionately chased for the next 27 years. The account is now a part of his latest book, Yeti: The Ecology of a Mystery, published by the Oxford University Press a few months ago.

At the heart of the book is an account of Taylor’s deep affair with the wilderness that started right outside his home—the last bungalow on top of a hill in the verdant environs of Mussoorie.

“It was an hour-long walk from the road ahead to reach this home. To enter the jungle, all I had to do was step outside my home," Taylor said during a visit in May to Woodstock School in Landour, Uttarakhand, where he had studied until fourth standard.

“It’s just the way we had been brought up. My grandparents were cowboys in Kansas. After they got their medical education, they came to India in 1914 and used to travel through the jungles in bail gadis (bullock carts), until they reached the next community. At each site, they camped, treated the villagers; then packed their things and moved on."

“Six weeks later, they returned to where they started. They told me stories about how my father was picked up from the tent by a she-wolf once, just like Mowgli’s story from The Jungle Book, until the ayah (maid) raised an alarm."

Taylor too led a similar lifestyle, when he started travelling across the country with his father, Dr Carl E. Taylor. The jungle then became a classroom of sorts as the family continued their travels for science and medicine.

Carl E. Taylor was born in Landour, India, an outpost in the western Himalaya, his parents Presbyterian medical missionaries from the US. He was later the founding chairman of the department of international health at John Hopkins University.

“We cultivated a scientific, scholarly thinking at our dinner table. If you had an opinion, my parents would say prove it—what’s the evidence, back it up. So when I saw the footprint at age 11, I knew that it was evidence. Just like that, I had a new challenge on hand," Daniel Taylor says, smiling.

This was at a time when parties still frequently set out to explore the Himalayas. According to Taylor, the earliest account of a yeti spotting dates back to 1889, when Major L.A.Waddell, a British army physician, saw strange footprints during a hunt in the high Himalayas.

More stories of such spottings emerged, some perhaps from those who were a part of an unsuccessful mountaineering attempt, all too desperate to come back with a good story to tell.

Soon there were focused expeditions, which set out for the sole purpose of discovering a yeti such as the 1954 Daily Mail expedition. During this journey led by John Angelo Jackson, the members trekked from Everest to Kanchenjunga, photographing yeti evidence en route—from paintings in various villages to footprints in the snow. The team is also said to have found two yeti scalps at Buddhist monasteries in Nepal. The yeti was becoming something of a pop culture obsession.

In the 1961 edition of The Himalayan Journal, author H.B.Gurung wrote on the lore of this shaggy beast that had captured the imagination of men.

“Himalayan wanderers have found the Yeti to be their Achilles’ heel, causing distraction in camp and during the climb," the article said. “Climbers need not read The Hound of the Baskervilles to be convinced, when alone in a flapping tent, of the Yeti’s eerie whistle down the wind. Leaving apart the few high-altitude Sherpas, the natives believe that the Sahibs are also scared of the Yeti: otherwise why should they be carrying such lethal weapons as ice-axes and crampons?"

In the meantime, Taylor had charted out his own course of action. The early journeys were to the local bookstore and the library in Mussoorie, while keenly observing the ways of the jungle during his long walks. It armed him with the ability to function with few scholarly resources on hand and a keen sense of observation, knowing what to look out for during each of the forays.

This early foundation helped him at a later stage during gruelling expeditions while exploring passes and valleys of the Indian Himalayas from Ladakh to Arunachal Pradesh.

“I was a boy who wanted adventure. Since I was poor, I couldn’t afford much, so I had to carefully pick my escapades. But then I managed to get the resources and grades, and hence landed up at the prestigious Harvard University," Taylor said.

From 1968 to 1972, while getting a doctorate in planning education and development at Harvard, he studied alongside the then-crown prince of Nepal, Birendra Bir Bikram Shah Dev. Taylor’s knowledge of the Himalayas made them thick friends.

Once he became King Birendra of Nepal immediately after, he told Taylor that if there was really a yeti, surely he needed a place to hide. There was no jungle denser than that of the Barun Valley that lay in the shadow of Makalu—the fifth-highest mountain in the world.

By then, Taylor was an expert of sorts on Nepal, having explored many regions as part of the Family Planning Program. “I knew the Himalayas and spoke the languages (Hindi, Nepali and some Tibetan). The Family Planning Program had plenty of money in Nepal then, as it did in India with Indira Gandhi, and I had access to a helicopter. It’s a nice thing to have when you want to explore the Himalayas. So I could schedule vasectomies in some remote valley, just because I wanted to explore it. That’s where I got talking to villagers and heard their stories," he said. 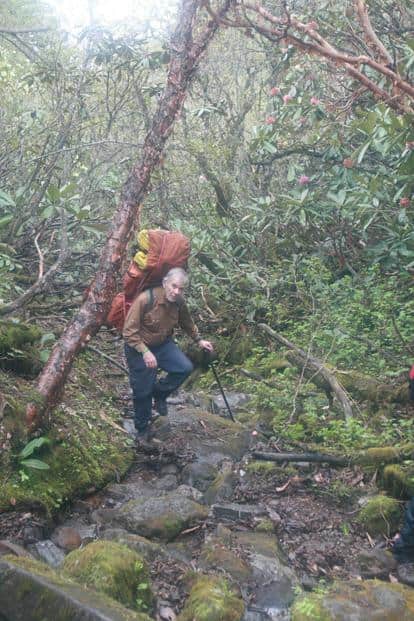 Daniel Taylor during one of his yeti hunts in Nepal. Photo: Daniel C. Taylor

“But I realized that there was no visible evidence of a yeti. If a shepherd boy went back and said a leopard had killed his goat, he would be beaten. But if he said it was the bun manchi, it changed the plot. How could a boy possible battle a spirit? Such stories over a period of time gave credibility to the existence of a yeti," he added.

After years of wandering and studying his findings, in 1983, Taylor would finally prove that the yeti was actually a black bear (known by the scientific name Ursus actos thibetanus) that lived in the trees.

It had been a relentless effort but instead of sitting back and finally breathing easy, Taylor was inspired to take on his next assignment.

“Once I knew it was a bear, I realized that either I was going to become a yeti myself by just talking about the bear story, which people didn’t want to hear. Or I could do something that was a lot more meaningful because I loved the jungle and tried to protect it. So I put together scholars, politicians, donors and villagers into a partnership," said Taylor, who now lives in Franklin, West Virginia.

In the next few years, Taylor and his team were instrumental in establishing protected wilderness areas in Nepal and Tibet. What stood out as part of their efforts was that these conservation projects involved local communities, rather than paid guards hired to protect the area.

It was followed by a similar setup to create the Annapurna Sanctuary. Another area was proposed in Tibet, working in cooperation with the Chinese military. Subsequently, the Qomolangma National Nature Reserve was established. It was instrumental in preserving species such as the blue sheep, snow leopard and the Tibetan wild ass, which were being heavily poached then.

The success meant similar projects were set up in other parts of Nepal and China, in addition to India, Bhutan and Myanmar. What started out as a yeti hunt then led to conservation efforts that earned Taylor accolades (a knighthood from the king of Nepal, a Dutch honour and the first honorary professorship of quantitative ecology from the Chinese Academy of Sciences) in the world of conservation.

At 72, Taylor continues to revisit these areas that he once helped preserve. Though the yeti was never found as a wild hominoid, it lives on as an icon in popular culture and its legend continues to terrorize folks in various communities around the world. For Taylor, the search for the yeti continues.

Shail Desai is a Mumbai-based writer who dreams of the mountains and lives for long road journeys.