Prithvi Shaw’s long ride from Virar to U-19 captaincy

Prithvi Shaw leads the Indian team in the World Cup; for the cricketer and his father, it is the culmination of years of hard slog

There was a time when Prithvi Shaw did the over-an-hour long local train journey from Bandra to Bhayandar on his father Pankaj’s shoulders.

It was the only way he could avoid getting crushed in the peak hour frenzy of a Churchgate-Virar fast train in Mumbai. Only when the crowd thinned in the compartment did Pankaj put his son down, followed by a quick check on Prithvi’s cricket kit, making sure it was still intact.

With a nonchalant shrug, Pankaj remembers that incident amid the construction mess at what will be their new home on Juhu Tara Road. The family plan to move in once Prithvi returns from his latest assignment as captain of the India team at the ICC Under-19 World Cup in New Zealand. India play their first match against the Australian U-19 side today.

The apartment, offered by Indian Oil, is just one of the perks Pankaj enjoys these days in return for years of graft. It is a far cry from the years of long commutes and distant suburban living.

“Us time pe aur koi chara nahin tha (There was no other way out at that time)," Pankaj says, as he recalls the days when they made the journey from Virar to various cricket grounds in the city.

Those were hectic days. While Prithvi caught up on that extra hour of sleep every morning, Pankaj was up cooking his breakfast—either a simple fare of roti and aloo ki sabzi or his favourite, anda ghotala.

Once up, it was a maddening rush to get aboard a train from Virar. It was only when Prithvi had made it to the ground that Pankaj breathed easy. While Prithvi slogged it out in the middle under the scorching Mumbai sun, Pankaj would spend the rest of the day watching him from under the shade of a tree on the periphery.

It was during one such blazing afternoon about eight years ago that this writer first met Pankaj. Once the session was over, it was time once again for a long train ride, now homewards. It wasn’t an easy proposition killing time on the dusty maidans, but Pankaj was well aware of what he had signed up for.

Ever since a three-year-old Prithvi began smashing little plastic mock cricket balls all over, Pankaj had decided to put his life on the back burner.

“Prithvi is the greatest gift given to me by God and his mother. Once she passed away (when Prithvi was 4), there was a void that needed to be filled. There was nothing else but cricket in our lives there on," Pankaj says. 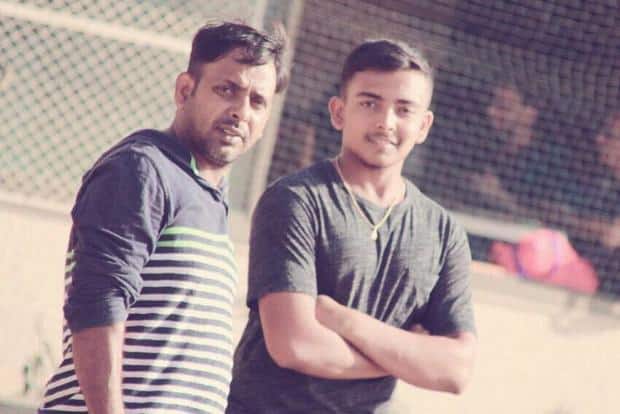 At a time when his garment business had just picked up—he used to source it from wholesalers and sell it in Surat and Baroda—Pankaj gave it all up. For the next three years, the duo survived on his meagre savings.

Every once in a while someone helped out with the bare necessities—both on and off the pitch. It wasn’t until much later that Prithvi started receiving scholarships to ease the financial pressure. They also found a supporter in Shiv Sena MLA Sanjay Potnis, who, in 2009, handed them a home in Vakola, a short distance from Prithvi’s training ground in Bandra.

“All of a sudden we had time—to rest, to think of other things, to bring about some order in our daily life. And to breathe," Pankaj says.

There was no let up on the cricket though. The time earned was mostly dedicated to more hours in the nets. When the regular bowlers tired, Pankaj took on their job, bowling for hours at the Air India ground in Kalina to help Prithvi hone his skills.

“Mujhe batsman banne ka mauka kabhi mila hi nahin (I never had the opportunity to become a batsman)," he says, breaking into a smile.

With no background in the sport, it was the least Pankaj could do to help his son on the field. This was at a time when Prithvi was turning out for Rizvi Springfield—a team that has dominated school cricket in Mumbai for years. He studied in the school from the third to the 10th standard and is currently in Rizvi College.

Back then, the Rizvi school team also featured the likes of Arman Jaffer (former international batsman Wasim Jaffer’s nephew) and Sarfaraz Khan, both of whom came from cricketing families. In addition to coping with the new ball as an opener, Prithvi also had to deal with these two breathing down his neck, eager to get to the crease and equally hungry for runs. Sarfaraz has already played the last few seasons in the Indian Premier League for Royal Challengers Bangalore.

There was little need then for the three boys to go looking for competition elsewhere. For instance, Sarfaraz’s mark of 439 in a Harris Shield tie in 2009 was bettered by Arman’s 498 the following year. As if to prove a point, Prithvi rewrote the record books with a 546 in 2013.

While basking in success was one thing, Prithvi also realised what it meant to fail in those early days. It was then a nerve-wracking experience, his father recalls, to simply be around him when he got out early.

His face would be flush even before he left the ground, and after getting the gear off, he would find a tree and sit in silence, tears streaming down his cheeks. No amount of coaxing would appease him, there was no question of eating a meal or even drinking water, and it was only Pankaj’s stern demeanour that would eventually extract some reaction from the crestfallen boy.

“He realized the importance of his wicket early on and how he needed to be patient, despite his aggressive approach to batting. It’s a lesson that has served him well today," Pankaj says.

During those early days, his height was another cause for worry—he’s around 5’7’’ today—especially when it came to finding equipment. Pankaj spent hours wandering around the sports shops in Dhobi Talao, hoping to find shoes that fit him or a helmet that would make him look like a batsman, instead of an astronaut.

The pair tried everything from swimming and cycling to several medical interventions, until Pankaj decided to let nature take its course.

“It was a task to find anything his size. There were times I’ve taken pads, cut them to size and stitched them again so that he could wear it during a game. But most times, he had to simply make do with oversized gear," Pankaj says.

This was never an excuse, though, when it came to his game. And Pankaj attributes it to a disciplined regime. While there was always time for an extra hour in the nets or late evenings attending tuition classes, the lights at home were out by 9.30pm for an early start the next day.

In all these years, the two never have never taken a vacation; celebrations after a good performance involved a quiet Chinese dinner, Prithvi’s favourite. Most bonding between the father and son happens over a meal, or while sharing a laugh as they watched television show, Taarak Mehta ka Ooltah Chashmah.

On occasions, when he needed time off cricket, they would make a trip to Virar, where Prithvi would relive the days from the past over a game of underarm cricket with local boys. Not much has changed even today.

“I’ll admit I’ve been a strict father at times. This was what was needed to get here and this is what is needed to continue the progress," Pankaj says.

Over the last few years, the Shaws have been rewarded for the grind, though there has been little change in Pankaj’s stoic demeanour. These days, he has some time to himself, as the endless shuttles to the maidans have reduced drastically.

Pankaj enjoys most of his son’s outstation performances on television these days. Sessions are followed by a quick phone call to check if Prithvi is eating well and sleeping on time. Though he has blossomed into a mature adult at 18 years, Prithvi remains his father’s little boy even today.

Like Virat Kohli said in 2011, in a different context, from the days of being carried on his father’s shoulders, Prithvi will shoulder the expectations of an entire nation come Sunday.

Shail Desai is a Mumbai-based writer.