1. A turbulent year for Sensex, rupee and oil

Earlier in 2016, crude oil prices dropped to lows that were not seen in more than a decade. On 20 January, Brent crude touched a low of $27.88 a barrel. However, 11 months later, crude was at $55 a barrel. The rupee weakened to a record low of 68.85 in November due to the US Fed rate hike, but recovered later. In the final trading session of 2016, the Sensex surged on widespread gains amid further strength in the rupee. The Sensex ended higher by 260.31 points, while the Nifty 50 rose by 82.20 points.

In its latest Financial Stability Report released on Thursday, the Reserve Bank of India warned that large borrowers are still haunting bankers. Large borrowers are those who have funded and non-funded loans of more than Rs5 crore. They formed about 56.5% of total advances of scheduled commercial banks at the end of the September quarter, as compared with 58% as on 31 March. However, their share in gross non-performing assets as on 30 September rose to 88.4% as opposed to 86.4% at the beginning of the financial year. The RBI warned that their asset quality has deteriorated significantly. 2016 saw a spate of train accidents, almost all of which were caused by derailment from train tracks. The latest happened on Wednesday when two people were killed and at least 40 were injured as 13 coaches of the Sealdah-Ajmer express train derailed near Rura-Metha station at around 5am. The accident occurred about 50km from Kanpur, not too far from the site of the worst train accident last year where at least 150 people were killed and another 260 injured in a derailment at Pukhrayan on 20 November. Kotak Institutional Equities’s December real estate report has cautioned that the volume of home sales could drop by 10-30% in the next 12 months in major cities as a result of demonetisation. The report also noted that prices of ongoing projects may correct between 7% and 12% in the next few quarters either through discounts or absolute pricing. The likes of Mumbai and the national capital region would be affected less as prices there have either started correcting or remained stagnant in recent years. Demonetisation could hurt agricultural incomes if liquidity levels do not recover. Channel checks and ground reports by analysts have recorded a drop in the prices of perishable crops. Based on observations from Gujarat, Emkay Global Financial Services Ltd argued that the decline in crop prices is due to higher production of kharif crop, not demonetization. However, a report by JM Financial Institutional Securities Ltd argues that demonetization is also to blame as small farmers who needed funds and lacked access to banking facilities sold their agriculture produce at a discount. Gold prices rose steadily during the first half of 2016, before falling in the second half as the US Fed signalled a rate hike. Data from the World Gold Council shows that consumer demand declined 39%, 18% and 28%, respectively, in the quarters to March, June and September, as rising prices affected demand for gold as an investment. Demand was also affected by the 42-day jewellers’ strike in February and stressed rural incomes. The near-term outlook is also subdued due to demonetisation. The growth in electricity generation slowed to less than 3% in July-November from about 9% in the first half of 2016. Though this rebounded to 8.5% in November, much of this growth can be attributed to a favourable base. Several large companies recorded weak generation volumes in the September quarter. While Adani Power Ltd’s volumes were flat, NTPC Ltd’s thermal power generation grew by less than 1%. A seasonal slowdown in demand could have affected generation. On the other hand, power offtake by distribution companies was weak in the September quarter. Aamir Khan-starrer Dangal entered the Rs100 crore club by the end of its first weekend at the box office, and also earned the second-highest opening day figure of 2016 (Rs29.78 crore). The film chronicles the real-life story of Mahavir Singh Phogat, who defied convention and trained his daughters to become wrestling champions. On 25 December, Dangal set the record for the highest ever single-day earning in India (Rs42.35 crore). It also created a precedent by breaking the jinx of demonetisation: film earnings, especially in single-screen theatres, had been hurt by the cash crunch. 10. Funding from angel investors slow down 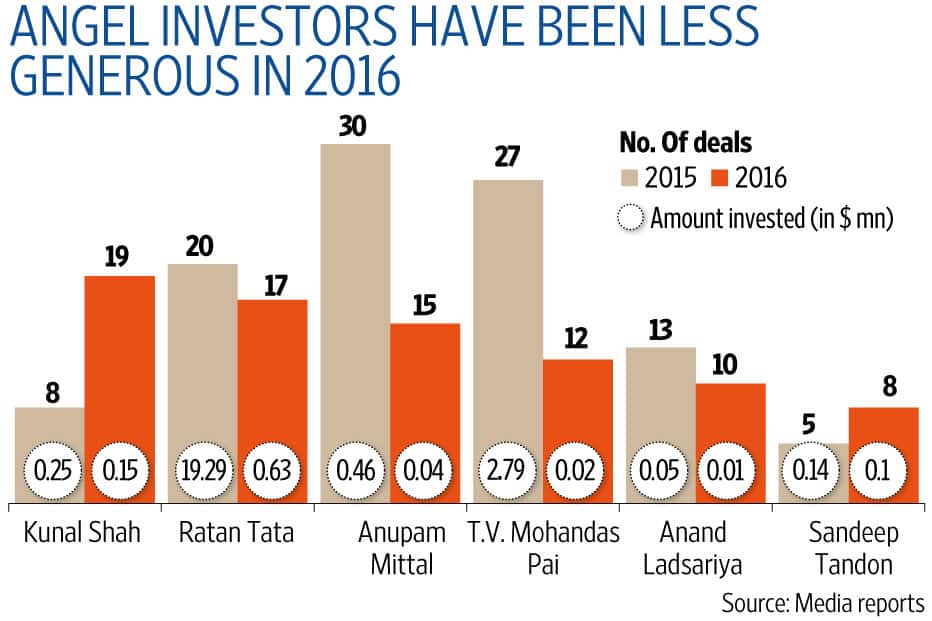