I-League's Neroca FC midfielder, Aussie Aryn Williams, is tracing the footsteps of his grandfather and idol, Lincoln Eric Grostate, who played in Bombay in the 1950s

When Aryn Williams, 24, decided to ply his trade for Neroca FC in Indian football’s I-League, there was more than just the football on his mind.

He was also trying to follow in the footsteps of an idol he had looked up to over the years; someone who had created his own identity on the field during a memorable stint in the country of his birth, India, which Aryn himself was visiting for the first time.

For, if it wasn’t for Aryn’s maternal grandfather, Lincoln Eric Grostate, football would perhaps have never become a part of the family legacy that runs through three generations and spans across three continents today. While growing up in Perth, Australia, Aryn had a ball at his feet as soon as he could walk. One man constantly shouted words of encouragement at Aryn and his two brothers from his armchair.

Through his three grandchildren, Grostate was reliving his days from the past, when he terrorised defences with his quick feet. That journey started miles away amid the textile mills of Parel in Bombay (now Mumbai).

Lincoln Grostate was born in an Anglo-Indian family to Ivy Mary and Cyril in 1934. Not much is known of his growing years, but after he was out of his teens, he was found to be good enough to find a spot on the Central Railway Sports Club football team. In the next few years, “Linky", as the football world came to call him, would go on to cement his spot in the side.

In an epic Nadkarni Cup final in 1956, Grostate left a lasting impression on the game despite it being one of the rare occasions when he didn’t score. Those were the days when a draw meant that the tie would be replayed (similar to what is seen in the FA Cup today).

After three matches (2-2, 0-0 and 4-4) failed to find a winner between Central Railway and Caltex, the two sides faced off for the fourth time at the St. Xavier’s College Gymkhana ground, not far from where Grostate lived in Parel. At the end of the decisive encounter, Central Railway prevailed through a lone goal by Joe D’Sa.

An article—from an old, undated newspaper cutting—about the game said:

During the same season, while turning out for Bombay in the Santosh Trophy, Grostate would play another vital role for his team in what became the upset of the tournament. In the semi-final, Bombay were up against the mighty Bengal, who boasted of 10 international players, eight of whom would turn out for India at the 1956 Olympics in Melbourne three months later. Bombay fielded a relatively modest team, where Grostate lined up alongside two future Olympians in goalkeeper S.S. Narayan and forward Neville D’Souza.

The overconfident Bengalis failed to break the deadlock at half-time. Just 10 minutes into the second half, all hell broke loose in the boisterous Police Stadium in Trivandrum (now Thiruvananthapuram).

“Neville snatched the ball away from Abdul Rehman, pushed it out to D’Sa on the right wing. The latter made ground, cut inside and laid the ball right for darting Grostate to whip it along the ground past the towering Chatterjee."

By the end of the game, the underdogs had held on for a famous win, though Bombay eventually lost the final to Hyderabad. Besides Bombay, Grostate also turned out for other sides such as Rest XI and the Western India Football Association.

A year later, Grostate’s exploits would take him to Tata Sports Club, where he would team up with Narayan, who had moved from Caltex. From under the bar, Narayan would watch him work his magic at the other end of the field.

“He just refused to give up. When Linky was on the field, there was always the chance of finding a goal, even in the dying minutes," Narayan, now 83, recalls.

Another teammate, Fornato “Franco" Fortunato, who played behind Grostate in the midfield, remembers him to be a flamboyant striker.

“There were three Anglo-Indian boys in the Railways, but only Linky made it to Tata...for his dependability. He was a big personality on the pitch, but a regular fellow off it. It wasn’t just football—he was also fantastic at billiards and snooker," he says.

In those days, social dancing was an integral part of Bombay, and Grostate frequented these venues when not on the ground. During one such outing, he met a pretty girl, Philomena Joanna, from neighbouring Dadar, and the two hit it off, eventually getting married in 1958 at the Holy Cross Church in Parel.

“At these dances, they used to pick out cards to find partners for the next dance," recalls Grostate’s daughter and Aryn’s mother, Audrey Williams, during a visit last month to her birthplace Mumbai—her first trip back in 28 years.

“My mom used to go there after work and my dad would also be around with his boys. As fate would have it, they paired up during one dance and soon fell in love. A lot of people warned her that he was a womaniser, drank alcohol, and that she should keep away. But nothing stopped them and they were together for the next 64 years." 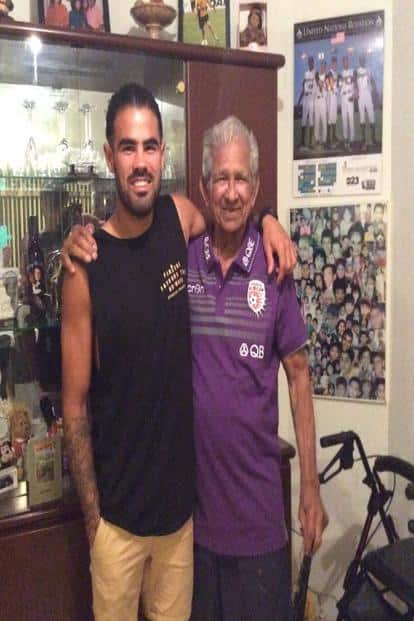 Aryn Willams with his his grandfather, Linky Grostate.

For the next three years, Philomena was a regular feature in the stands alongside her father in-law, and the two were Grostate’s most ardent supporters. But the family soon packed its bags and got on board a ship to England via the Suez Canal to start a new life away in Middlesex—for better opportunities.

“Dad never played football after he left India. In fact, he turned to hockey and played right until the veterans’ category. I think it was because a lot of his friends who had moved to England from India were playing hockey at that point," Audrey remembers.

Of the five children (the two sisters were born in Bombay, the other three in England), Audrey and two of her brothers took to football as well. While the children were growing up, Grostate applied for citizenship to Canada and Australia. When he received a positive response from the Australian authorities, Grostate decided to move his family in 1974 for better opportunities.

Audrey continued chasing football, turning out for Western Australia for seven-odd years while bearing four children. Her husband at that time, Eric Williams, too was a semi-professional footballer, who went on to pursue a coaching career in Myanmar and Malaysia.

Whenever Audrey had a training session or game scheduled, the children would be bundled up in the car and would cheer their mother from the sidelines. Soon, Aryn, his twin brothers Ryan and Rhys, were all part of the Sunday league fixtures in their respective age groups.

Grostate and his wife used to make it a point to be around during the home games. An indicator of just what football meant to the family was the fact that affairs with the church were settled on Saturday evening, so that they had the entire Sunday for family and football.

“I would have to come back with the fixture list of all the boys and sit down to understand where I could be at what time, being a single mom. My father would do just the same—besides my three boys, four other grandchildren also played football. So he would try and catch all their games at some point. Of course, he would take my mom along everywhere he went," Audrey says.

Though the children grew up in Australia, there was still a touch of India during those early years.

“It wasn’t your typical Indian family, yet a lot of things ‘Indian’ were a part of our daily routine. I remember having dal and rice while growing up, at times, even some hot chillies. For dessert, we had our fill of kulfis and barfis," Aryn recalls, smiling.

It wasn’t your typical Indian family, yet a lot of things ‘Indian’ were a part of our daily routine. I remember having dal and rice while growing up, at times, even some hot chillies. For dessert, we had our fill of kulfis and barfis- Aryn Willams

The three brothers graduated up the ranks and went on to chalk their own paths towards a career in professional football. The eldest, Rhys, played at Middlesborough, Burnley and Charlton Athletic, before moving to Perth Glory last season alongside Aryn. Having qualified to play for Wales through his father, he turned out briefly for the under-21 squad, before making his senior debut for the Australian national team.

Ryan plays his club football in England, turned out for the junior Australia sides and is in the reckoning for the upcoming World Cup in Russia.

Aryn moved to England when he was 15 and spent over three years with Burnley, even making the youth FA Cup semi-final during that stint.

“I learnt pretty much what I know about football during that time. Seven to eight players from that team went on to play professionally at the senior level, which is a pretty high number from one team. So we exceeded a lot of expectations and that was what was driving me," Aryn says.

He then moved back to Australia and played in the A-League for three seasons, before the opportunity to play in India arrived.

“I don’t think we had a choice to be honest when it came to football—not that we were forced to play but it was pretty much embedded in us. My sister played for a while too," Aryn says.

“My grandfather used to tell me that I should go to India and play, so when Neroca came calling, I knew I would cherish it for the rest of my life."

For Aryn, the games in Kolkata, especially against Mohun Bagan, were special, knowing that his grandfather too had once played in front of the passionate Bengali crowd.

“He used to tell me about playing in front of 1.5 lakh screaming fans. The thought of it is just outrageous. It was a bit surreal to finally step out on the ground in front of the same football-crazy folks, after hearing stories from him through my growing years.

“I spoke to my nana (grandmother) before the Bagan game and she told me all that she knew about the team. I could tell that she was happy. I wish my grandfather was around, so that he could see that it had finally happened (Grostate died two years ago)," Aryn says.

During a successful season with Neroca, where they finished second on their I-League debut, Aryn bossed the midfield, while also adapting to roles in the attack and defence when needed. These days, he hopes to live his own dream of donning the national team jersey by applying for an Indian passport and letting his football do the talking in the months to come.

In the process, he hopes to keep the great Linky Grostate’s legacy alive in Indian football circles.