For all practical purposes, I am a liberal and think casual sex is an acceptable proposition. What stops me then from indulging in a perfectly moral and pleasurable act?

Early last week, a close friend called. Our relationship is an old one, we trust each other with our lives, and confide about pretty much everything under the sun.

She’d just gotten out of—for the lack of a better word—an interesting fix after having gone to visit a friend from her college days and her husband. In social circles, the couple has a reputation for being intellectual powerhouses.

To cut a long story short, a little after their much-anticipated meeting started out, niceties exchanged and dinner done with, the couple made a proposition. If they invited two of the man’s friends over, would my friend be open to participating in a no-strings-attached sexual encounter with any of the three men in the room?

My friend was told she could exercise her will and choose between any of the three men, end the act at any point she thought it uncomfortable, and there would be no coercion of any sort. After she’d chosen one or more partners, the others would be voyeurs to the proceedings. They didn’t sound threatening at any point and made it adequately clear to her that whether or not she wanted to participate was her choice.

Fortunately, my friend is the kind who doesn’t get fazed or goes into a funk about what may seem like an extraordinary situation to most people. She was neither scandalized nor afraid. But because she hadn’t been in a situation like that before, she thought it might just be a good idea to call me and ask what I think. The both of us are on the same wavelength and understand each other like the backs of our hands.

There are two pertinent things about me here that I ought to place on the table:

1. I think of myself as a liberal, believe in freedom of choice, and think it ought to be extrapolated every place—sexuality included. I don’t think of free sex as a crime, just a part of life and that nobody ought to be penalized for it.

2. Ironically, in my personal life, I am a prude and expect nothing but total fidelity from my partner. That said, I must confess when I introspect, I think my liberal attitude to everything save fidelity an act of intellectual dishonesty.

I suspect that is why I told her that I thought it to be a bad idea, and she ought not to bite, however tempting it might sound to the carnal instinct. After our quick conversation, it didn’t take much thinking on her part to go back and decline the offer. No love was lost between all of them and everybody had a perfectly good time chatting until they parted ways in the wee hours of the morning.

I couldn’t shake the episode out of my head. I had to explore the nature of casual sex, the nuances it contains, and what is it about the act that conflicts with my otherwise stated liberal posture. Why am I like this? What is it about sexuality that creates conflicts?

In looking around, I stumbled across a TED talk by Zhana Vrangalova, a New York-based sex researcher, writer and educator that attempts to answer: Is casual sex bad for us? Or is it artificial panic?

She comes from a school of thought that argues it has many potential benefits. “The first one is obvious. Sexual pleasure. Orgasms. Hedonic ecstasy if you will."

“Then there are things like learning new sexual skills. Making new friends, an increased sense of self-confidence, accomplishment, desirability, empowerment and freedom. You collect stories to tell when you are old," she says in her talk on the theme.

That apart, she argues casual sex has a primal pull as well. Humans need adventure and novelty; for some more than others. Casual sex satisfies that need.

She doesn’t deny the downsides either: Unsatisfactory sex, regret, confusion and social stigma are some variables that people fear. Most people fear these cons outweigh the pros. But that is not true, she argues. By way of example, she points to the outcomes of various studies. Consider the following graph, for instance. 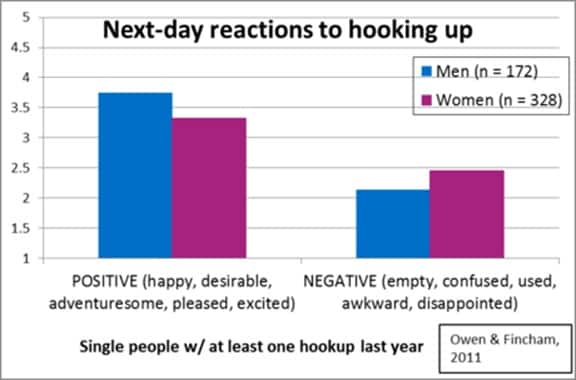 End of the day, she argues, both men and women are happier post hooking up with somebody. These findings are supplemented by other studies that demonstrate that casual sex has no impact on longer-term psychological well-being. That said, it is only fair to state upfront these conclusions are on the back of averages. That potential to inflict harm exists as well. Eventually, it all depends on what kind of a person you are.

What that means is casual sex is not for everybody. “Nothing sexual ever is really," she says. “Due to differences in nature, nurture and life circumstances, some of us have a much stronger need for sexual novelty. Some feel comfortable having sex with people they don’t love. So you need to figure out where you are on this spectrum. For instance, is hooking up with someone you are not dating enjoyable? For that matter, is it morally unacceptable to you? Would you hook up with this person even if you aren’t going to see them afterwards? If the answer to all of these is no, you shouldn’t really be doing it."

Now, sexual desire and romantic love are two distinct psychological and physiological systems that evolved for two different evolutionary purposes. Making babies versus staying together long enough for those babies to survive.

The two systems are not independent. Sex can set in motion a cascade of neurochemical processes in the brain that lead to love. Neurotransmitters released during sex include oxytocin, vasopressin and dopamine. They make you bond with your partner even if you don’t want that to happen. And the more you have sex with that person, the stronger that bond grows. Then, when those bonds get broken, as they often do in casual relationships, it hurts.

Some people are luckier that their brains are wired in such a way that they don’t get attached easily. But for those who do get attached, Vrangalova argues, reasoning with the self can beat involuntary infatuation. When in the moment, it is easy to get conned into believing every person who gives you orgasms and treats you well afterwards will make for a good long-term partner.

All said and done, I am with her in that there is nothing inherently wrong or unhealthy about wanting casual sex or having it often. As much as it can be a source of mental and physical suffering, it holds the potential to enrich life and bring great happiness. Sure, the risks are high. “But," advises Vrangalova, “there is a lot you can do to maximize your chances of getting rewarded."

That takes me back to the beginning. Why am I so prickly in my personal life then when it comes to sex? What compelled me to convince my friend to back out of an idea she seemed amenable to, but was conflicted about?

Kuldeep Datay, my psychologist and life coach for all practical purposes whom I visit every weekend, tells me it is because for all the noises I make about being a liberal, deep down I am a conservative hunter-gatherer—the kind who genuinely believes it is a man’s moral obligation to hunt and fend for the family while the woman takes care of home and hearth. And that I straddle two worlds; but don’t belong to either. Call me a wanderer, if you will, searching for his moorings. But that’s how it is and I suspect that is how it is with many urban Indian men like me.

I think that is a punishing observation, but one I have on-boarded in an attempt to understand who I really am.

Charles Assisi is co-founder and director at Founding Fuel, a digitally led media and learning platform for entrepreneurs. He tweets on @c_assisi