Postcards from an Antarctic expedition

The great thing about social media is that narrating an untold tale can lead to the stars of the story to come out and make themselves known. This is precisely what happened after my essay titled When Indira Gandhi’s India ‘invaded’ Antarctica was published here, and Col. (retd) Pavan Nair, a lurking entity on Twitter, tweeted it from his near-anonymous account, acknowledging himself as an Indian Army major who led the construction team for the Dakshin Gangotri base station in Antarctica. (The expedition was led by Harsh Gupta, a scientist, and the wintering party by Lt Col. S.S. Sharma.)

I contacted Col. Nair, who, as it turns out, went on both the second and third Indian expeditions to Antarctica, and asked whether he had any pictures to share from this very rare experience, and his generosity in sharing the images led to this excellent photo essay. A treasure trove from Col. Nair of how Dakshin Gangotri, India’s first base in Antarctica, was constructed is now available for everyone to witness, thanks to the power of social media. The excursion ship Finnpolaris, 13,000 tonnes, when we reached Antarctica. You can see the hectic activity on deck. A snow vehicle closest to camera is about to be unloaded by crane onto the sea ice. An Indian Navy Chetak helicopter is being readied for a reconnaissance mission. Also visible are an Indian Air Force Mi-8 heavy-lift helicopter for ferrying construction materials to the site. One of the two Mi-8s was lost in an accident. Luckily there were no casualties. This picture was taken late at night. 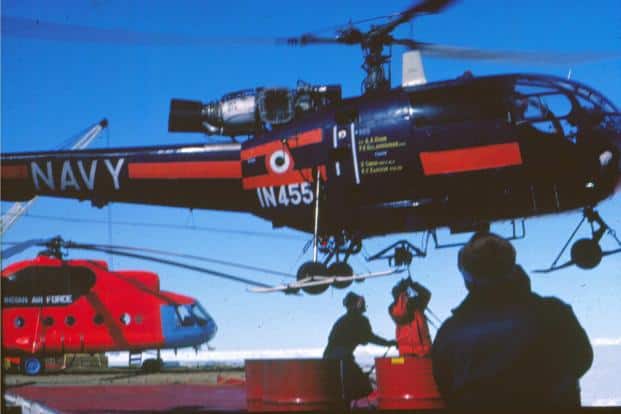 The Chetak helicopter ferrying barrels of fuel to the construction site of Dakshin Gangotri with one of the Mi-8s in the background, wearing a high-visibility colour scheme. Construction of Dakshin Gangotri station in progress. The base was acquired from the UK, and included all systems for electricity generation, heating and water supply. The entire construction process was finished by the Indian Army team in 64 days flat, a feat unrivalled by any other country. 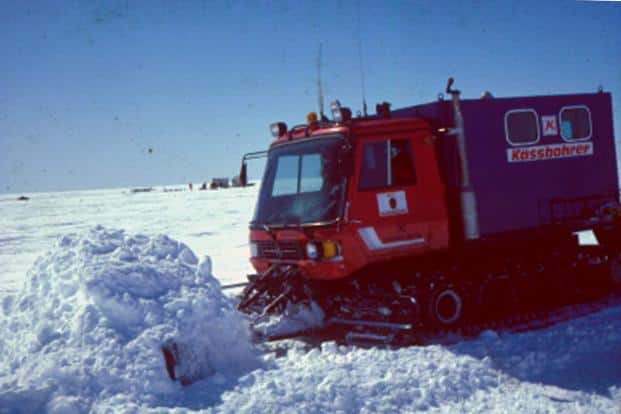 A snow vehicle in action. Besides the construction of the base, the army team was responsible for the operation and maintenance of two such snow vehicles, which were acquired from Germany. These were used to transport loads on sledges and as personal transport. Here, the vehicle is digging the foundation of the Dakshin Gangotri base. A view of Dakshin Gangotri’s generator room. There were three generators, one operational, one on standby and one on maintenance. An view of the almost-complete Dakshin Gangotri facility. The dome on the left was for satellite communications. 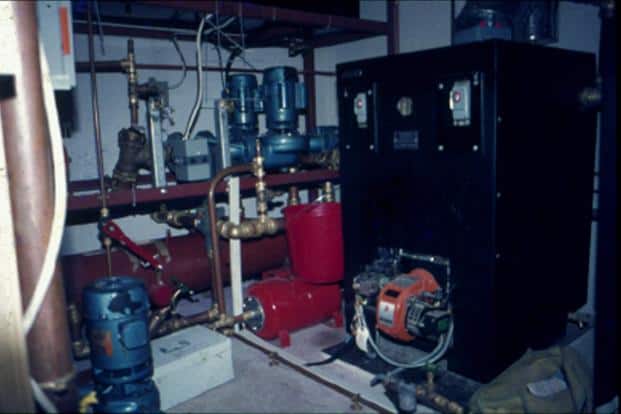 A view of the boiler room. Hot water was used to keep the base warm. An Emperor Penguin pays a visit to the construction site. The Russian research base Novolazarevskaya on the rock range where Dakshin Gangotri came up later. An aerial view of the Schirmacher range, where India's flagship base Maitri was eventually constructed, 70km south of Dakshin Gangotri. The Indian Army team celebrates after building the Dakshin Gangotri base. The team worked 12-16 hours a day in possibly the harshest conditions on Earth. An aerial view of the Dakshin Gangotri construction site. 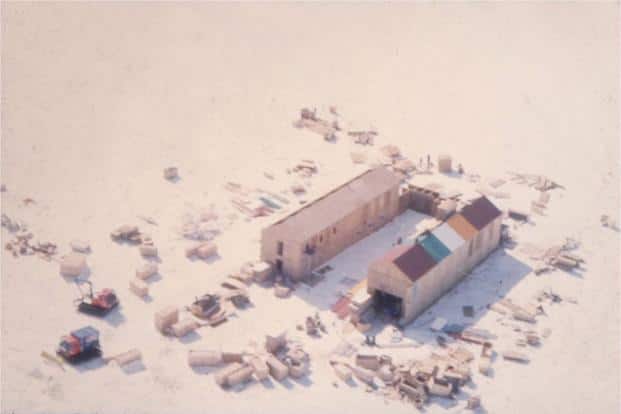 Another aerial view of the site. Sailing away on the ship. The wintering party of scientists and logistic support personnel from the army came to see the team off before settling in to face Antarctica’s long, harsh winter. An Mi-8 helicopter landing on the Finnpolaris.