Home / Mint-lounge / Mint-on-sunday /  Keynes, the economic colossus
Back
Share Via

John Maynard Keynes was enraged. He had come second in the British Civil Service Examination. The rank was not a problem, for it was good enough to get him into the India Office in London, his preferred department, along with Her Majesty’s Treasury. It was his lower-than-expected performance in the papers on mathematics and economics—his two strengths—that really bothered him.

Nevertheless, in the October of 1906, Keynes started his civil service career as a junior clerk in the military department of the India Office. In the tradition of Macaulay and Mills, he performed his job on purely utilitarian principles without much thought for the human or moral implications of colonial rule. In that sense, he was a man of his times.

The work was pretty dull for someone of his ability, but the hours were leisurely enough to allow him to work on his dissertation and enjoy an active social life. Within two years, the dissertation was completed and, wanting to channel his energies more productively, he resigned and embarked upon his academic career at Cambridge.

The experience at the India Office was not a waste. He learnt to “see the problems of economics from the angle of the administrator", something that would serve him, and the world, well over the next four decades. Secondly, it gave him the subject of his first book.

During his brief sojourn at the India Office, Keynes had become quite interested in the monetary affairs of India, and over the next few years, he became a sort of a public defender of its monetary arrangement. Since the fag end of the 19th century, the “gold standard" had become the global norm. Under this system, gold and currency could be used as a medium of payment interchangeably. Currency was freely convertible into gold at a fixed price, so money in circulation had to be backed by gold in the national treasury.

India’s “gold exchange standard" was an exception, where the rupee was pegged to gold, but gold was only used for foreign payments and not for internal circulation. Indian gold reserves were loaned to London at interest, ready to settle international payments if and when needed.

This was against the prevalent orthodoxy of the gold standard and often attracted criticism. Keynes wrote Indian Currency and Finance over the Christmas holiday of 1912 as a defence of the Indian monetary system. In fact, he argued that the rupee arrangement was the ideal system for the whole world. The genius of the rupee’s gold exchange standard was that India was able to economize its use of gold and expand the supply of the rupee according to business requirements. It was here that he famously dismissed the gold standard as “a relic of a time when governments were less trustworthy".

Meanwhile, a Royal Commission to look into Indian currency and finance matters had been set up in 1913. Keynes was expectedly offered a seat there. In a memorandum circulated to the commission in October that year, he put forth an ambitious blueprint for a central bank for India. The system proposed the setting up of regional state banks in Calcutta, Bombay and Madras, with the central board presiding in Delhi.

The boldness of the plan can be appreciated from the fact the even the American Federal Reserve System had not been established by that time. More daringly, Keynes suggested that the banks be independent—free from the influence of the government. The Bank of England itself achieved such independence only in 1998!

In Indian Currency and Finance, Keynes had made the intellectual case for a fiat currency (i.e., backed by government credibility) as opposed to a tangible one (i.e., backed by a commodity). Fast-forward three decades: Keynes was at the forefront of designing the post-war monetary system. The Bretton Woods conference in 1944 was led jointly by Harry Dexter White, the American representative, and Keynes. A unique attempt at institution building on commercial and political lines, this conference established the International Monetary Fund (IMF), the World Bank and a global monetary system that was a minor modification of the gold exchange standard Keynes had advocated in his 1913 book.

Keynes breathed his last 70 years ago. At the cost of repeating a cliché, his insights are more relevant than ever in these perilous times we live in. For all the good that was achieved at Bretton Woods, the agreement had a serious weakness. The purpose of the IMF was to deal with balance of payment crises. That is, if a country ran into a crisis due to an unsustainable trade deficit, the IMF’s job was to provide temporary loans in exchange for structural economic reforms that would avoid future deficits.

But for every deficit, there is a surplus. While government over-spending and overly generous wages could lead to trade deficits, massive savings or wage suppression could lead to unhealthy surpluses—the German and Chinese economies today are perfect examples of this.

Unfortunately, the IMF as designed laid the onus of adjustment entirely on the deficit countries, when the source of global imbalances could have easily come from the surplus countries. Keynes had fought hard against this asymmetry at the conference, but the US, then being the creditor to the world (i.e., a surplus nation), stonewalled his efforts and prevailed.

Keynes, of course, had a personal interest in fighting for Britain as it was neck-deep in war-related debt. But that does not mean he was wrong. The current economic crisis in Europe is in many ways a direct result of the asymmetry Keynes tried to rectify in vain.

Sticking to Europe, Keynes had written The Economic Consequences of the Peace to highlight the folly of demanding repatriations from a vanquished Germany after World War I. Not only did he find the repatriation demands to be economically unrealistic, he warned of grave economic and social consequences. Such was his conviction that he had resigned in disgust from the British delegation at the Paris Peace Conference in 1919 over that very issue.

Events over the next two decades vindicated his stand. His warnings were not lost on those lamenting the human and economic consequences of punitive economic policies thrust upon the Greeks after 2010.

For the layman—or rather, the lay politician or pundit—Keynes is synonymous with high government deficits. Keynes’ key insight in the 1930s was the benefit of using fiscal policy to stabilize aggregate demand. As monetary policy in advanced economies today wanders into uncharted territory—what with negative interest rates and talk of helicopter money—fiscal policy is conspicuous by its absence.

Unfortunately, active fiscal policy for demand management has earned a bad name due to the inflationary 1970s and high public debt since 2008. But that is a failure of Keynesians and not Keynes. He had argued for a fiscal surplus in good years and a deficit in bad ones, so that the budget roughly balanced over the business cycle. However, policymakers ran deficits when the economy sagged but forgot about running surpluses in good times.

Moreover, the persistent enlargement of the state in the second half of the 20th century ran into political crossfire and a lot of the resistance to Keynesian fiscal management stems from a desire for a leaner state.

I am not a Keynesian economist. In fact, few mainstream economists would claim to be Keynesians in the proper sense. Sure, most economists use his insights, but few in the profession use the models he helped develop. The Achilles heel of Keynesian economic framework was the absence of prices. While prices can sometimes be assumed away to be fixed in the very short run, their absence in his framework meant that those models lacked dynamics and could not be used for analysing longer horizons.

Nevertheless, his magnum opus, The General Theory of Employment, Interest, and Money (1936), founded the field of macroeconomics 80 years ago. It was a “general" theory, for it sought to explain the economy in whichever state it was, as opposed to the classical, pre-Keynesian theories that worked only at equilibrium. By pointing out that demand equals supply is simply an accounting identity that classical economists mistook for a causal relationship, he revolutionized economic thought.

He showed that sometimes output could be constrained by demand. Thus, the governments can and must intervene to prevent a recession by reviving demand. This was a revelation in the 1930s, when balanced budgets and tight monetary policies were the sign of rectitude. So, when a central bank lowers rates or a government starts spending to stimulate a slowing economy, you have Keynes to thank for intellectualizing that idea.

But whatever his economic genius and academic contribution, his enduring legacy has to be his audacity to conjure up new institutions out of thin air. Such was his intellectual dominance and bravado that he imagined and then helped establish the institutions that form the bedrock of today’s global policy set-up.

Just look at the following tabular representation of something Keynes had sketched during a meeting in 1944 (from The Leaderless Economy by Temin and Vines, 2013). 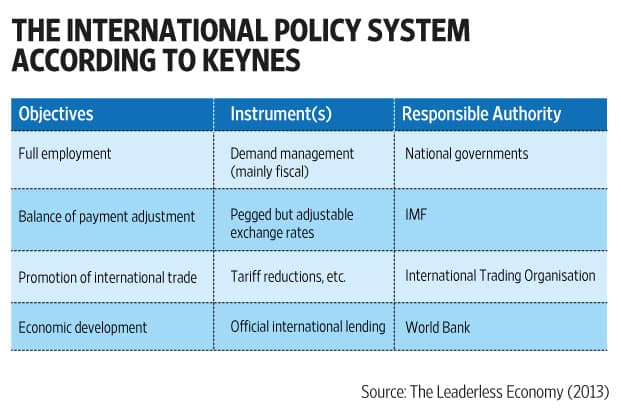 It is amazing, not just how precisely Keynes imagined the post-war economic order, but how that order has prevailed for more than seven decades with no end in sight. The only deviation over the past 35 years has been the growing importance of monetary policy as an instrument for demand managements, and as a corollary the emergence of floating exchange rates.

While there is not enough space for a critical evaluation of all these institutions, it is sufficient to say that they have done much more good than harm. Just for this, Keynes deserves to be remembered as one of the greatest and most influential individuals of the 20th century. We may all be dead in the long run, but Keynes’ benign shadow will loom large for many more decades.

Ankit Mital is an economist and a lapsed academic. He is currently writing a book on the 1991 economic crisis and liberalization.