Vice president M. Venkaiah Naidu on Monday said there was a need to consider a proposal for the two houses of the Indian Parliament to meet for at least 100 days a year. Doing so would mean adding about 30 more days to the Parliament itinerary for the year. In 2015 and 2016, it met for 68 days each, with the Budget Session accounting for the largest share of its sittings. This year, following a truncated winter session between 15 December and 5 January of next year, it would have effectively met for 60 days. 3. All exit polls give Gujarat, Himachal Pradesh to BJP

All exit polls have predicted clear wins for the Bharatiya Janata Party (BJP) in both Gujarat and Himachal Pradesh elections, which are essentially a straight fight with the Congress. The exit polls gave the BJP an average seat share of 60% in Gujarat and 68% in Himachal Pradesh. If the BJP wins Gujarat, it will be returning for its sixth consecutive term. If it wins Himachal, it will take over from Congress, and the state will become the 19th in which either the BJP or/and its allies are in power—the highest number of states that a single party or political grouping has held since 1993. Results will be announced on 158 December. Indian opener Rohit Sharma amassed his third double century in one-day internationals (ODIs) on Wednesday. Of the seven double hundreds scored in ODIs, three now belong to Sharma, with the remaining split across four other players. Such has been the pace of evolution of batting in this format that the first double ton was scored only in 2010 and there have been six since. Like his previous efforts, Sharma’s latest—208 not out in 153 balls—was an essay in two parts. In his first 126 balls, he scored 116 runs. In his next 27 balls, he hit 92 runs, including 11 sixes and 3 fours. Even then, the percentage of runs that came in 4s and 6s was the second-lowest among the seven double tons. 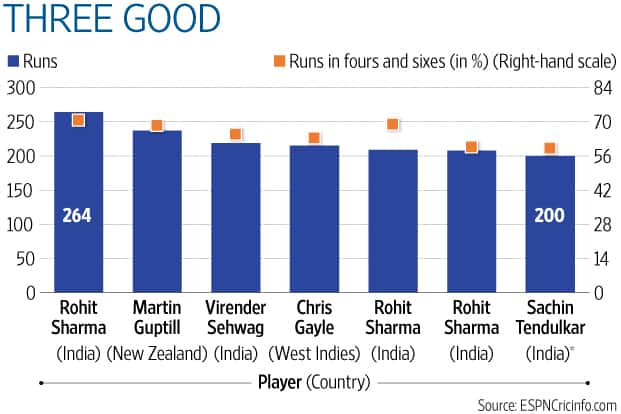 When he smashed 146 of 69 balls on Tuesday to help Rangpur Riders win the Bangladesh Premier League, Chris Gayle became the first batsman to notch up 20 hundreds in the T20 format. He is miles ahead of other batsmen in the centurion list: the next best is 7 centuries (Michael Klinger, Luke Wright and Brendon McCullum). Gayle, the archetype of a free-agent cricketer, has played 320 T20 matches, across 22 teams. What’s impressive about Gayle’s record is not just the number of centuries, but also the frequency with which he has scored them. He averages a century every 16 innings. The next best is Klinger, with 22 innings. Mukesh Ambani-owned Reliance Jio Infocomm Ltd continued to add more telecom subscribers than any other operator. It saw net additions of 7.3 million subscribers in October, more than twice than that of Bharti Airtel Ltd. The latter still leads in market share, with 24.2%, even as Reliance Jio continues to make significant advances, reaching 12.4% at the end of October 2017 to be in the fourth spot. Reliance Communications Ltd, which is owned by Mukesh’s brother Anil Ambani and is facing multiple insolvency cases, lost about 11 million subscribers in October, the most among all operators. Tata Teleservices Ltd was the other prominent loser. 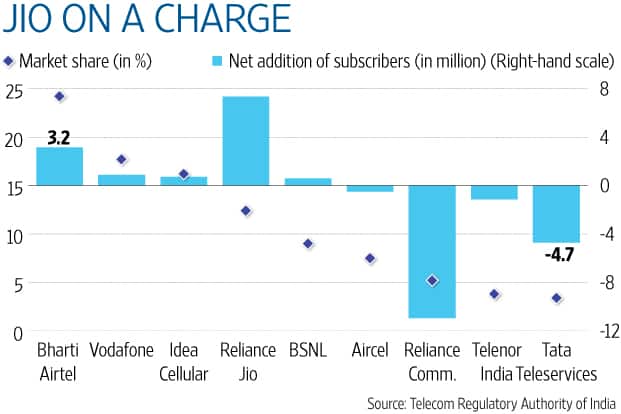 7. India a laggard in broadband speeds

According to Ookla’s Speedtest Global Index for November 2017, India was ranked 109 out of 122 countries in mobile Internet speed (download speed of 8.8 Mbps). There were six European countries in the top 10 list of mobile Internet speed, led by Norway (62.6 Mbps), while the global average was 20.3 Mbps. In fixed broadband speed, India was ranked 76 among 133 nations, with a download speed of 18.8 Mbps. This list, too, had six European nations in the top 10, but was led by Singapore (153.9 Mbps), while the global average was 40.1 Mbps. 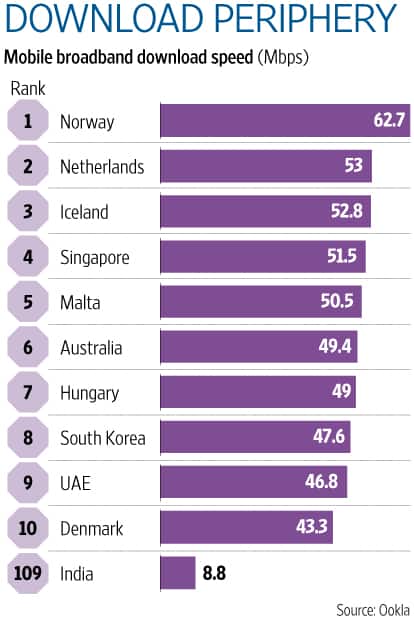 Latest UK Labour Force Survey data released on Wednesday shows that, between May to July 2017 and August to October 2017, the number of people in employment in the UK fell. So did the number of unemployed, while the number of economically inactive people (not working, and not seeking or available to work) increased. Latest estimates show that average weekly earnings for employees in Great Britain in real terms (adjusted for price inflation) fell by 0.2% including bonuses and by 0.4% excluding bonuses, compared with the year-ago period. 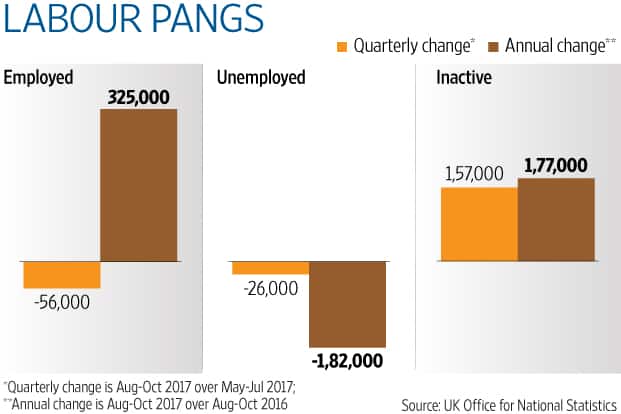 India’s Consumer Price Index (CPI), a measure of retail inflation, rose to 4.9% in November, its highest level in 15 months. By comparison, it was 3.6% in October 2017 and 3.6% in November 2016. The increase was mainly due to a greater increase in prices fuel and food, especially vegetables. This also exceeds the central bank’s medium-term target of 4%. Last week, the Reserve Bank of India had kept key interest rates unchanged due to inflationary concerns and also raised its inflation projection for the six months ending March 2018 to 4.3-4.7%. 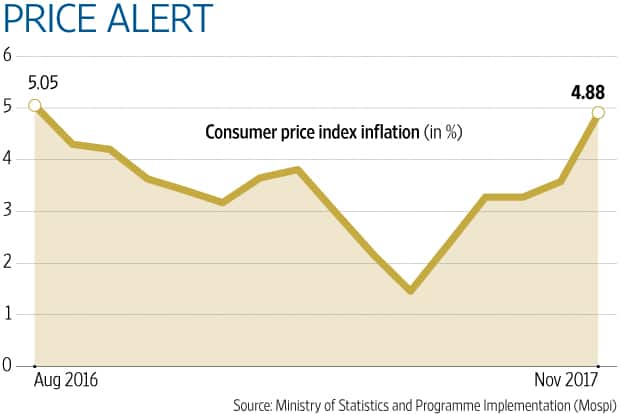 In a widely expected move, the US central bank increased its key interest rate. The US federal funds rate, which helps determine rates for mortgages, credit cards and other borrowings, will now move in the range of 1.25% to 1.5%. This is the fifth time the Fed has increased interest rates since the 2008 financial crisis. Federal Reserve officials plan to raise rates three more times in 2018, and then twice in 2019.