Ever wondered if you could implant a memory?

Just how do memories work anyway? In a fascinating study, researchers have managed to make a mouse remember something that never happened

Do you remember the last time you were scared? Perhaps on entering a dark room right after watching that slasher movie? Do you remember the last time you felt intense pain? Stubbing your toe against the bed frame would have made you extra careful around furniture for a while. How about that time back in school your class teacher slapped you with a ruler for not bringing in your homework? Fear and pain make for strong memories.

What is memory? Memory is how the brain stores information. Information that we get through our senses, about the world outside the brain. Memory is the ability to store and recall pieces of information that the brain collects. To understand it better, neuroscientists, psychologists and philosophers have classified memory into different types.

Explicit memory is an intentional recollection of information—it is what you remember when you try to actually “remember" something. It can be divided into two distinct types: Episodic memory, which is the storage of personal experiences (the taste of pav bhaji when it was raining on Tuesday night), and semantic memory (I paid Rs120 for the pav bhaji I ate on Tuesday).

To truly understand how the brain stores and works with memory, we need to look a little at how the brain is organized. About a billion neurons form the building blocks of the brain. These billion neurons connect with each other through about a trillion "touches" called synapses, forming neuronal circuits. Many different circuits work in synchrony to function as a "region" of the brain. Different "regions" talk to each other across space and time to result in the working of a whole brain.

Memories are made and reinforced in a special part of the brain called the hippocampus. Aside from looking like a tiny sea horse, it is crucial for both learning and memory—two of the most important functions required for an organism to learn and live another day.

Researchers at the Massachusetts Institute of Technology (MIT) have manipulated neurons in the hippocampus to “hack" the very core of memory formation. They took a mouse and genetically engineered it so that neuronal activity in their hippocampus can be observed and manipulated. They also made it remember an event that never actually happened. And you thought Inception was only a movie!

Neurons in the brain are in a constant state of activity. These neurons increase their activity in response to any stimulus from the environment of the organism. This increase in activity is the result of a change in the flow of positively and negatively charged ions across the neuronal membrane. The increase in activity switches on the expression of a single gene called cfos and this results in the formation of cfos protein.

When groups of neurons get activated in response to an environmental cue—say, a bright light, a small beep or a mild electrical shock—they immediately make cfos protein. So, using this protein as a unique marker, researchers can distinguish stimulus-specific recently active neurons from other neurons that do not activate.

Researchers then linked the expression of the cfos gene to that of a second gene that was delivered to the brain region by tiny injections. The second gene, called Channelorhodopsin, codes for a protein with the same name.

Channelorhodopsin, or ChR2, was isolated from single-celled green algae called Chlamydomonas reinhardtii. In these algae, the presence of the ChR2 protein makes them sensitive to blue light. Now, along with being light activated, the ChR2 protein is also a gate for charged ions. Therefore, shining light on a ChR2 protein present on a neuronal cell membrane means the neuron will get activated. Scientists isolated the gene for ChR2 and put it under the control of the cfos gene in mice neurons. This means, the very first time neurons get activated, along with cfos, they will also express ChR2. From this point onwards, whenever you shine blue light on these already marked neurons, they will get activated, mimicking the same activation that occurred during the formation of that particular memory.

With this technique in hand, scientists from MIT devised a series of experiments. They came up with a way to give a specific memory to a mouse. First, they built a box with different and distinct features—white plexiglass walls, metal rod floor, dimmed light and a smell of vinegar. Then, they put a mouse in this box and let it explore for three minutes. The human equivalent of this would be walking into your cubicle at work—the arrangement of your desk, the grey carpeting, the smell of coffee.

Right at the end of the three-minute period, the researchers gave a mild yet perceptible shock to the mouse by electrifying the metal rods on the floor. Clearly, the mouse does not expect a shock and reacts appropriately—by leaping off the floor. Keep in mind that in response to this session in the box, neurons in the hippocampus of the mouse get activated to help form a memory of this scenario. And once they are activated, they express the light-activated protein ChR2.

After this session and a whole 24 hours of rest and relaxation in its home cage, the mouse is put into the same box again. Anticipating a shock this time, the mouse freezes. A natural response to fearful stimuli in rodents, the amount of time the mouse freezes is an excellent indicator of how fearful it is and ultimately, how well it remembers the box with all its accoutrements—the walls, the floor, the light and the vinegar.

Now the scientists waited another 24 hours and put the mouse in a completely different box. This time it looks like this—black plexiglass walls, smooth plastic floor, bright light and a smell of vanilla. Imagine walking into someone else’s office—pinned papers on the wall, beige carpeting, and smell of oranges. Now this is clearly nothing like the first box. If we put our mouse into this box, obviously it shows no freezing.

However, if we now shine some blue light into its hippocampus through some implanted optical fibers—the mouse freezes—as if it was scared, as if it was back in the first box. This is because the blue light activated the exact same cells that helped make the first and fearful memory. 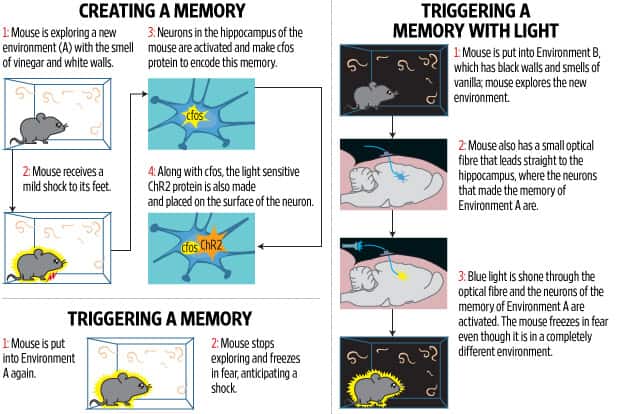 For most of neuroscience history, memory has been an elusive creature. Once the sole domain of psychologists and behaviourists, memory and brain function now have been studied and quantified through many different biological lenses—anatomy, physiology and biochemistry, to name a few.

Some of the earliest studies on memory came from animal models or human patients with “lesions" in various parts of the brain. One well-used example in both psychology and neuroscience is Patient H.M.—Henry Molaison.

To control his debilitating seizures, Molaison’s surgeon physically removed some parts of his brain, including most of his hippocampus. What Molaison lost was the ability to make any new memories, right after the surgery. This condition, called anterograde amnesia, is the loss of ability to make any new and lasting memories after the event that led to the amnesia in the first place. Molaison could remember a lot of things—his childhood, his teenage years, the accident that gave him the epilepsy—but he could not remember a person he met 15 minutes ago.

The engram experiment described in this article is a watershed in memory research. It elegantly combines multiple levels of questions—molecular, cellular and behavioural—to answer a very simple question. Where is memory formed in our brains?

Does memory formation equal a change in the genes that the neurons express? Is memory found in a change in neuronal anatomy? Does it arise due to the pattern of connection between neurons? Between sub-regions? Between regions?

The natural outcome of these studies, where memory can be manipulated, is almost in the realm of science fiction and fantasy. But, most importantly, we can use them to make valid therapies for many neurological disorders. Two major examples are Alzheimers and post-traumatic stress disorder (PTSD).

One study brought about a sea-change in the way we understand memory loss as a disease. Memories of a person afflicted with Alzheimer’s were thought to be lost or disintegrated. But it was shown that they are not lost at all, merely “inaccessible". With blue light, these memories can be activated instantly, even though they could not be activated with everyday natural cues.

In practical terms, the experimental mouse with Alzheimers was not able to remember being in the shock box 24 hours ago, despite it having the same cues—same smell, same light intensity and same floor pattern. But once blue light was shone into its hippocampus to activate the engram cells, the mouse instantly remembered and froze in fear, in anticipation of an incoming shock.

Using this combination of green light and Arch, neurons that code for a specifically unpleasant memory can be inhibited, leading to a suppression of memory recall. This can be an invaluable non-pharmacological treatment for people who suffer from advanced PTSD. Or, on the other hand, if you just want to erase memories of your ex because they just cause too much anguish, a la Eternal Sunshine of the Spotless Mind.

The bottom line to keep in mind is that these results represent a very small step forward in understanding of how the memories in the brain are formed, stored and retrieved.

All these studies were done on rodents, specifically mice. As mammals, mice and humans share a lot genetic characteristics and basic anatomical features of the brain. But they are also different species with a lot of unique and individual features.

Translating all this research into viable, tractable, clinically relevant methods that can be applied to humans will be a challenge. But it is a challenge that will be worth taking up and will be remembered for times to come.

Shruti Muralidhar is a neuroscientist at MIT and works with Prof. Susumu Tonegawa. She is also part of IndSciComm, a collective that helps Indian and Indian-origin scientists find their voice in science communication. This article includes pay-walled publications as part of its reference list. Please email the author at shruti.muralidhar@gmail.com for the full text.