The marble cliffs of Bhedaghat

A magical world with patterned white cliffs and hidden dinosaur eggs exists at Bhedaghat, a mere 25km away from Jabalpur in Madhya Pradesh

I remember watching Kareena Kapoor dance to the tunes of Raat ka nashaa abhi in the film, Asoka, and being mesmerized by the song's location.

Where, I wondered, was this breathtaking corner of the world? Surely not in India, I reasoned, else I would have stumbled upon it on my travels or at least heard about it. And then I forgot all about it until I happened to go to a town called Jabalpur in Madhya Pradesh. A local there told me to visit a place called Bhedaghat, merely 25 km away, and promised me that it would blow my mind.

A boat ride takes you along the Narmada river at a leisurely pace, as you gape in wonder at the majestic white cliffs rising a hundred feet tall on both sides. It is almost a magical parallel universe, the cliffs changing colour as you float by.

In reality, they do not actually change colours like the Ayers Rock in Australia. Instead, the cliffs comprise of many shades of marble, giving the illusion akin to a light show as you see the rays of the sun bounce off the rocks. The white marble has seams of black and green volcanic rock entwined within, turning the marble into a palimpsest of colour..

There’s not a dull moment, through the 90-minute boat ride. The guides are entertaining and often talk in rhyme, pointing out shapes and formations in the rocks to look out for. There’s a rock with a ‘shivling’ on top and another that looks like a giant’s face has been carved into it. India’s very own Mount Rushmore. The area is also known to be rich in fossils and scientists have discovered dinosaur eggs in the ghats around Bhedaghat, often kept safe in ancient temples, under the assumption that they were sacred signs Shiva left here after he battled demons (asuras).

For a surreal experience, you may also take a boat ride in the moonlight when the silver waters look like liquid mercury. The white rock pinnacles cast shadows on the rippling waters beneath, contrasting against the dark sky, embraced by the river yet reaching for the heavens above. 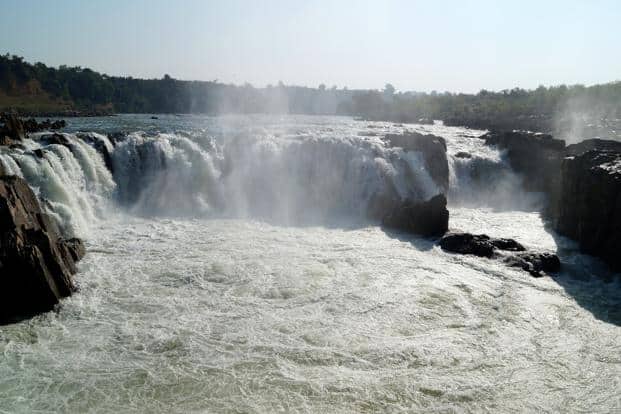 Unpredictable as nature often is, the tranquil waters of the river gain a sense of urgency after a point and turn turbulent as they crash down the imposing Dhuandhar Falls a distance away. What can be best described as the Niagara Falls of India, these lesser known horse-shoe falls are no less spell-binding. Like the Niagara, these falls are surrounded by mist created by the crashing waters. The roar of the water can be heard from afar, much before the unsuspecting eye is able to witness this awe-inspiring spectacle. India is a cornucopia of experiences, of unique places. Besides storytelling, films also often give us glimpses of a world unfamiliar to us, a world that exists in this realm and yet borders on the whimsical and surreal. Beauty that you would not believe existed, unless you took the journey and saw for your own self. Who would have thought, that a magical world with patterned white cliffs and hidden dinosaur eggs existed right here, in the heart of our own country?

Harnoor Channi-Tiwary is a marketing specialist who wandered into the world of writing and never left. She has been writing about food and travel for more than a decade. She blogs at TheThoughtExpress, tweets as @HCdines.