The Reserve Bank of India (RBI)’s new monetary policy committee cut the policy rate by 25 basis points, citing a weakening in food inflation. Prioritizing growth over inflation, governor Urjit Patel and the committee indicated that RBI had time until 2021 to reach its inflation target. Markets reacted positively to the news, with the yield on the benchmark 10-year government bond falling to 6.771%, and the rupee gaining 0.06% to 66.54 against the US dollar. Patel said the RBI expects inflation to be in the 5-5.3% range in January-March 2017, as against 5% the previous quarter. Gold prices, which rarely move more than 1% in a day, plunged 3.3% this week to reach a four-month low. Gold’s plunge can be attributed to not only concern over a likely rate hike by the US Federal Reserve, but also the rate cut by RBI. The cut may push up inflation, weakening the currency and hurting the ability of buyers to purchase gold, already expensive at Rs30,000 per 10g. Inflation may also erode people’s spending power. India accounts for anything between a quarter to a third of the world’s jewellery demand. 3. Google, Apple are still the world’s most valuable brands

The annual Interbrand Best Global Brands Report, released this week, listed Apple and Google as the world’s highest valued brands, with Coca-Cola coming third. Apple and Google retained their spot at the top for the fourth consecutive year. While the report estimated the value of brand Apple at $178.1 billion, up 5% from last year, the value of brand Google was estimated at $133.2 billion, up from 11% from last year. The other top brands in the list include Microsoft, Toyota, IBM, Samsung, Amazon, Mercedes-Benz and GE. The Court of Arbitration for Sport (CAS) provided some relief to embattled tennis player Maria Sharapova when it cut her ban to 15 months from two years. The court ruled that though Sharapova had tested positive for meldonium, a banned medication, she was not an “intentional doper". Sharapova had admitted to taking meldonium, arguing that she had not known that the medicine had been banned by the World Anti-Doping Agency (WADA) on 1 January, just before the Australian Open. The reduced ban means that she will be able to compete at the French Open next year. The Securities and Exchange Board of India (Sebi) has begun investigations against Yes Bank over suspicion that the bank had violated rules relating to listing obligations and disclosures before it went ahead with the Qualified Institutional Placement (QIP). Last month, the bank had announced that it was launching a QIP, only to withdraw it a day later. Sebi has argued that the bank’s disclosures about a board meeting which would consider fund-raising through the QIP route did not meet Sebi’s listing norms. Failure to follow key regulatory requirements for a QIP may have misled the market, resulting in the stock of Yes Bank falling, causing losses to shareholders. The maximum monetary fine in such cases amounts to Rs1 crore. Twitter’s shares fell 9% on Wednesday following reports that Google had decided to withdraw its bid to acquire the company. Media reports also stated that the likelihood of Apple bidding was slim, leaving Salesforce.com and Walt Disney Co. as the chief bidders. Though Twitter has some 313 million monthly active users, it has struggled to grow its revenue base and increase membership. Twitter could cost anything above $20 billion, more than a third of Salesforce’s $49 billion valuation. Its rival bidder, Disney, on the other hand, has a market capitalization of $150 billion. Google this week unveiled a new smartphone called Pixel, along with a slightly larger version called Pixel XL. It’s the first to have the latest Android 7.1 operating system, and comes with a sophisticated digital assistant. Though the new phone has been seen as a direct challenge to the Apple iPhone, any gains made by Pixel would also come at the cost of Samsung, especially as both Samsung phones and Pixel run on the Android operating system. The move could put Samsung in a tight spot, given that it is already facing flak over exploding Galaxy Note 7 phones. Though Rs5.6 trillion worth of spectrum was put on offer in India’s largest spectrum auction, by the end of the five day sale period, the government had raised only a total of Rs65,789.12 crore. The government will receive less than half of this money in this fiscal. The government sold around 965MHz, 41% of the total airwaves on offer. The premium 700MHz and 900 MHz bands remained unsold. The circles that saw the most attention were Uttar Pradesh (East), Haryana and Rajasthan. The subdued response could possibly arise from a likely price war triggered by Reliance Jio Infocomm Ltd’s entry as well as high reserve prices of the airwaves. The International Monetary Fund has raised its 2016-17 growth estimate for India to 7.6%, up from its earlier projection of 7.4%. It cited positive sentiment towards India, riding on the back of a strong economic recovery, adequate policy moves, and strong external buffers. It stated that the economy has gained from lower commodity prices, and a larger-than-expected decline in inflation, while praising the government’s move to implement the goods and services tax and the Reserve Bank of India’s efforts to strengthen bank balance sheets. 10. E-commerce firms battle it out 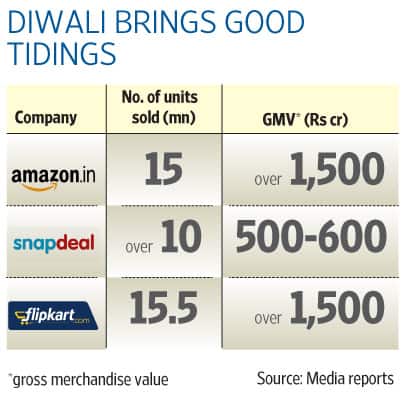