First, we need to ask ‘Why’

Having answered that, we need to find what lies at the intersection of complexity and order, else lethargy or chaos is inevitable

A few weeks ago, on the back of a conversation with Steve Patterson, I shared what I’ve learned from a crackpot philosopher. Some correspondence between us followed. A little later, he connected me to the CEO of a firm in North America with whom he thought I may find common ground.

On looking up Issac Moorehouse, founder of Praxis, I thought so too and wrote him a note on where I come from and what it is I work on. A crisp conversation followed. The gentleman heard me out and politely told me that while he likes my pitch, and that he may be amenable to work with me in the future, as things are, he isn’t. I was floored.

A few questions later, it was clear why he isn’t inclined to work with me now. While there is an opportunity, it does not fit into his current scheme of things, his beliefs and his “whys".

And what does he believe in? Based on his background and experience, he is better off catering to North America, a market he understands than any place in the world. But more pertinently, he is resolute about his personal beliefs as well and why he stands by them, and has put it up on his website, a lot of which got my attention. I’ve reproduced some parts of it below ad verbatim:

• Your education belongs to you and no institution can give it to you.

• Discovering what you hate is more important than finding out what you love. As long as you’re not doing things you hate, you’re moving in roughly the right direction.

• Don’t fear how you compare to your peers.

All said and done, his caveat on the future filed as well, we promised to stay in touch and parted on a pleasant note. That done, it compelled me to ask a question of myself: If I were him and a compelling opportunity comes my way, what will I do? Some soul searching later, the answer was staring me in the face: Unlike him and many people I know, I wouldn’t let it pass. But this man did. Why?

Two things stood out in Issac’s manifesto—the significance of free time and getting past the fear of peer approval. Now the question is, how do people like him have as much clarity? And why is it that they can state it as unambiguously? More pertinently, he didn’t waste his time or mine.

Some perspective to these questions emerged on the back of a short talk I had listened to a long time ago around an idea I then thought intriguing: Why comfort will destroy your life. The speaker, Bill Eckstrom urges us to imagine four rings lined up vertically. He suggests we imagine the ring at the bottom as one where comfort exists. And at the top, one where chaos prevails. 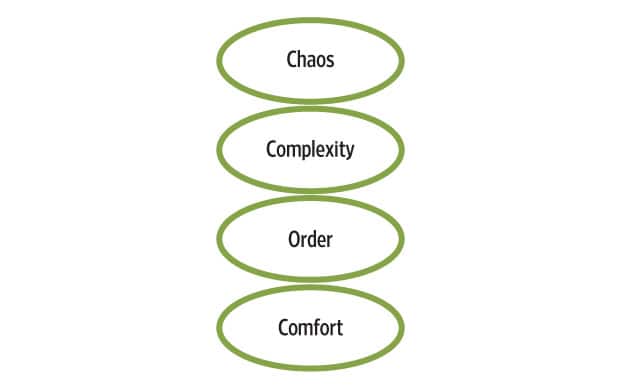 Eckstrom argues that if a person is in the comfort zone—either internally as an individual or externally in the world she operates in, lethargy is inevitable. In much the same way, at the other extreme, when in the middle of chaos, it is practically impossible to think right.

In theory, it follows then that the ideal place an individual ought to be is where order exists. But, Eckstrom argues, in the overall scheme of things, when things are in order, comfort is tempting and stagnation is inevitable.

The real world, though, is a complex place. This is because most events in our life happen at the intersection of chaos and order. To grow, we have to figure how to navigate complexity. But most people have no clue where to begin. Because the problem with complexity is the utter simplicity behind which it hides itself.

Consider this rather innocent question: What is the more complex of the two, mathematics or psychology? The intuitive answer is psychology. All of us are armchair psychologists and have an opinion. But mathematics requires an understanding of the subject and is difficult to opine on.

But S. Srinivasan, a former colleague who moved to London after his car was vandalized in Mumbai by hoodlums from the Shiv Sena because it carried a number plate that originated in Tamil Nadu tore that assumption into shreds the other day on Quora:

“Mathematics is all about accurately measuring and describing the world around us. That much I always knew. But when I was a rookie, I thought it merely dealt with numbers, shapes and formulas. How wrong I was! it took years of experience with this thing called life to know that numbers aren’t the most important thing about mathematics. It is the ideas, the philosophy, the descriptive thought process that define the subject. In other words, mathematics starts out as a science, but for its true connoisseurs, it elevates into an art.

“That understanding allowed me to see mathematics in all walks of life. I learned bits and pieces of many subjects—crime and forensic science, politics, economics, financial markets, literature, automobiles, history, geology and even a very tiny amount of martial arts. To my utter amazement, I realized that there is mathematics in each of these areas. What’s literature, but the math of words? What’s economics, if not the math of prosperity? What is history, if not the math of civilization?

“It is with this understanding that I admire psychology. It’s simply the math of human behaviour. Since almost every subject that I have mentioned above, and those I haven’t mentioned, are derivatives of human behaviour, I dare say that psychology is the supreme math...

“... Psychology is not bottled pep talk. It has a scientific basis. It is the practical application of neurology on human behaviour. It lies at the intersection of mathematics of neuro-transmittors and this useful faculty of empathy. It is used in financial markets to identify the best profit-making investments (behavioural economics), solve crimes (criminal profiling, lie detection), improve education (modern classroom practices) and increase retail sales (store arrangements). In other words, there is no discipline in this world that doesn’t benefit by the infusion of a bit of psychology..."

It is only pertinent now you ask what does what Eckstrom’s hypothesis on the zone of comfort and Srinvasan’s assertion on psychology being the most supreme of sciences have to do with Morehouse and what got me floored?

1. On going over Moorehouse’s personal manifesto, a few things are clear. In the first instance, he is clear about why is he doing what he has set out to do. Most people know what they do and how they do it. But they don’t know why they do it. Getting to answer “why" we do something is among the toughest questions any individual—or organization—can face up to. Simon Sinek offers some pointers to this in one of the most watched TED talks of all time—albeit in a commercial context. But it is easy enough to comprehend and extrapolate into a personal one.

2. In going over where Morehouse is right now, it is clear to me he understands he is dealing with complexity. And he has to walk on a line that brings in order as well. While grabbing an offer like mine may get him the extra monies, it could potentially introduce chaos into his life. Why should he deal with chaos? Instead, he’d much rather choose a complex environment that he can grapple with and as it settles into order, choose to infuse more complexity into it.

3. And he perhaps has a nuanced understanding of himself, those around him and his environment. That implies while he may not be a trained psychologist, he is not an armchair one either like most of us are; but one trained in the school of life.

It’s an uncomfortable, but rewarding place to be in.