The earthquake that shook Nepal on 25 April may have killed 15,000 people, according to media reports. The official death count so far has topped 6,000 people. Photo: Reuters

1. Some respite for FIIs on MAT, but slowdown in inflows continues

The government offered concessions on the applicability of minimum alternate tax (MAT) to foreign portfolio investors. Capital gains from sale of securities, interest income, royalty and fees for technical services will be exempt from MAT where the tax rate is below 18.5%. The taxman has issued demands to 68 foreign institutional investors for Rs608.83 crore so far; the total amount is expected to cross Rs40,000 crore. The MAT issue plus poor earnings and high equity valuations have hurt investor sentiment on Indian stock markets. 2. Capgemini acquires iGate for $4 billion in an all-cash deal

Capgemini SA acquired iGate Corp. for $4 billion in cash in a deal announced on 27 April. The deal, one of the largest tech deals in the world this year, will see the exit of iGate co-founders Ashok Trivedi and Sunil Wadhwani, along with private equity firm Apax Partners. The deal spells bad news for domestic information technology (IT) firms. The Europe-based company’s offshore capabilities will get a big boost, as the acquisition will add 100,000 employees in global delivery centres. With such a large offshore presence, it will be able to compete far more effectively on prices with Indian IT vendors. 3. Tough days ahead for Vijay Mallya

An internal probe conducted by United Spirits Ltd with the help of audit firm PricewaterhouseCoopers (PwC) prompted the company’s board to seek the resignation of chairman Vijay Mallya, who refused to quit and called the probe “severely flawed". The board said it would approach shareholders to seek Mallya’s removal and recommended that Diageo Plc, which owns United Spirits, review its pact with the tycoon. The probe found an alleged diversion of funds to other UB Group companies between 2010 and 2013. PwC, which conducted the probe, was the statutory auditor of United Spirits in 2011. 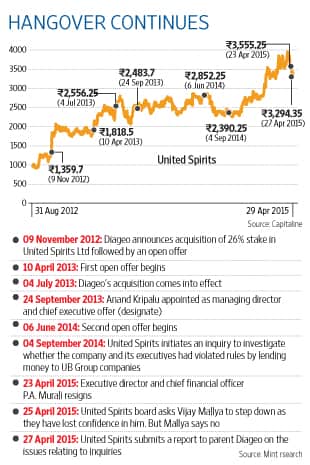 The US economy slowed to a crawl at the start of the year as businesses slashed investment, exports tumbled and consumers showed signs of caution, marking a return to the uneven growth that has been a hallmark of the nearly six-year economic expansion. Gross domestic product expanded at a 0.2% seasonally adjusted annual rate in the first quarter, the US commerce department said on Wednesday. The economy advanced at a 2.2% pace in the fourth quarter and 5% in the third. Twitter’s revenue growth slowed to 74% in the March quarter, as compared to the 97% increase during the prior quarter, lower than analysts expected. This was caused by lower-than-expected monetization on some of the newer ad products. The company also reduced its guidance for the year based on the current trends. To top its woes, Twitter’s earnings, after an inadvertent posting by Nasdaq, were leaked by financial intelligence company Selerity before the official results were declared. 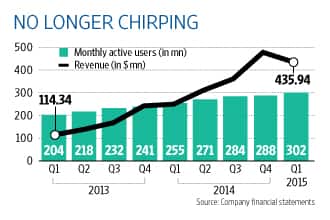 The government signed off on a Rs1 trillion urbanization plan on Wednesday with the Union cabinet approving the proposal to create 100 smart cities and the rolling out of a new five-year urban development mission for 500 cities. Key focus areas of the mission, which allows states greater flexibility in spending the money, include provision of clean water supply, sanitation and solid-waste management, efficient mobility and public transport, affordable housing and governance. 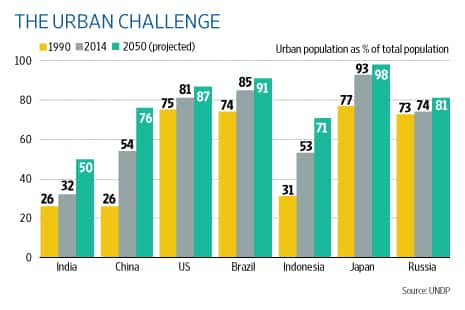 Vedanta Ltd reported a consolidated net loss of Rs19,228.12 crore in the quarter ended March due to an impairment charge. The company wrote off over Rs19,000 crore against its acquisition goodwill account. The write-off, one of the largest for Indian companies, was necessitated by a sharp fall in crude oil prices, which lowered the value of its oil and gas assets. It also took an impairment charge on overseas copper mines. While the commodity prices trajectory is anybody’s guess, the challenge for Vedanta is to remain profitable in these tough times, as incremental production may well not be viable at times. Reliance Power Ltd’s exit from its Tilaiya ultra mega power project, citing land acquisition delays and cost overruns, has been called a smart gambit by analysts. There are no immediate financial implications. The company said it has spent Rs300 crore so far which it deems recoverable. It also has enough projects—at least 15,000 megawatts—in the pipeline. But its pullout is a symptom of larger problems affecting projects for the past few years—regulatory and procedural hurdles. The new government’s efforts to de-bottleneck these projects is taking time to show results. The earthquake that shook Nepal on 25 April may have killed 15,000 people, reports Time magazine citing army chief Gen. Gaurav Rana. The official death count so far has topped 6,000 people. The quake, which flattened sections of Kathmandu, Nepal’s capital, has also injured more than 10,000 people. It set off avalanches around Mount Everest, where at least 17 climbers died. At least 50 deaths occurred in Bihar as well due to the earthquake. 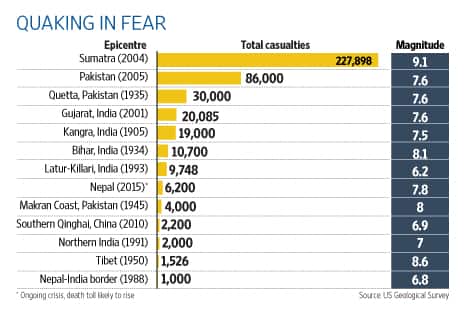