How banks migrated during Partition

As India completes 70 years of Independence and looks at the exciting future lying ahead, we are bound to reminisce over the past 70 years too. This is because of the circumstances which led to both India’s independence and its Partition into two countries.

There is a lot written about the political history around the events and I would leave that discussion to the experts in the area. I will focus on a domain with which I am more comfortable—that of monetary and banking history. Even this subject is vast, and I will focus just on migration of banks during the period. Just like people migrated from one region to another, we saw similar things happening to banks as well. After all, banks are made by humans.

C.N. Vakil, in his 1947 book on the economic consequences of Partition, provides some initial statistics. His study is based on data released by the Reserve Bank of India (RBI) about the state of banking in India and Pakistan in August 1947.

However, this data turned out to have far worse implications when RBI updated it later. On 31 January 1949, the central bank released its annual publication, the Statistical Tables Related to Banks in India, for the year 1947, covering Pakistan as well. This was because RBI was the central bank for Pakistan until 30 June 1948. This publication is a veritable goldmine when it comes to understanding banking dynamics during Partition.

RBI says that due to Partition, there were number of problems as some branches were permanently closed and other branches were temporarily closed—not to mention that some banks shut down entirely. Moreover, RBI released data only for those banks that were submitting their cash reserve returns under Section 277L of the Indian Companies Act.

It is interesting to note that one of the scheduled banks was Habib Bank, which was established in 1941 in Bombay. Most of the indigenous banks were run by non-Muslims and similar community trends were seen in case of joint stock banks as well. This may have been due to the fact that lending against interest rates was seen as usurious in Islam. Thus, the bank was started by the prominent Habib family at the request of Mohammed Ali Jinnah and after Partition shifted base to Karachi—again on Jinnah’s request. The other scheduled bank was Australasia Bank, based in Lahore in 1942.

The decline in scheduled banks is mainly due to migrations from Pakistan to India, whereas in the non-scheduled category, the decline is on account of both closures and migrations. As RBI only reported on the data of banks which gave cash accounts, the closure data is not clear. So, we will stick to the migration of banks.

We see that eight scheduled banks and nine non-scheduled banks shifted their head office from Pakistan to India. It is interesting to note that nearly most of these banks were based in Lahore and not Karachi, which emerged as Pakistan’s financial centre. It is also important to see that all these banks were from West Pakistan as there were no reported case of migration from East Pakistan. Quite a few of these banks migrated in June 1947, before the Partition date. Some of them migrated as even though their business was registered in Pakistan, they had higher businesses/branches in India.

As we see, of the eight scheduled migrant banks, three went on to become one of the 20 nationalized banks in India. Punjab National Bank was formed by eminent swadesis led by Lala Harkishen Lal. New Bank of India was established by professor Mulki Raj Kohli, an economics-teacher-turned-banker. Interestingly, Bank of Maharashtra was also formed by an economist, professor V.G. Kale, in Pune in 1935. Oriental Bank of Commerce was established by Rai Bahadur Sohan Lal.

There is another interesting thing to note with these migration banks. In the case of Habib Bank, which migrated from India to Pakistan, we see a rise in deposits. 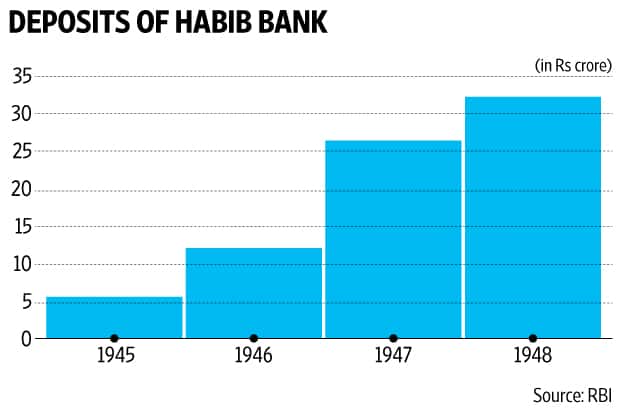 However, we see a decline in deposits of all the banks which migrated from Pakistan to India! (We have reported the data for PNB separately as its larger size distorts the graph). 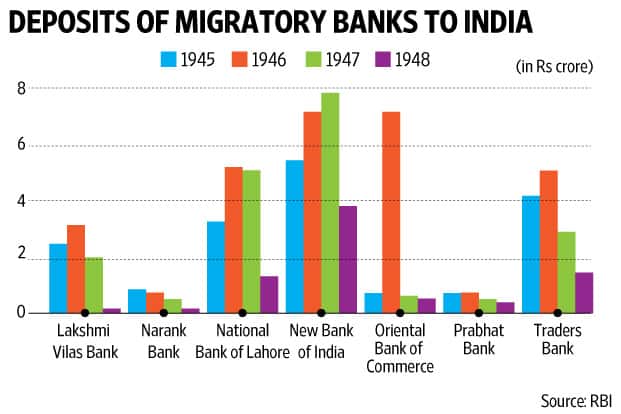 In fact, the one bank which was based in Pakistan—Australasia Bank—also gained in deposits. We analyzed the same data for Punjab banks based in India—Punjab and Sind Bank and Punjab Cooperative Bank—and saw decline in the deposits of both the banks. So, it was not just about migratory banks but part of a broader trend in the two regions. In Pakistan’s case, we just have two banks and thus cannot really generalize the trends. However, to see so many banks that migrated to India lose deposits was an interesting development. It was perhaps due to combination of both the factors, paying back depositors in Pakistan (who in turn parked their deposits in Pakistan-based banks, fuelling their growth) and the shock of Partition leading to uncertainty among India-based depositors, as shown by ample cases of banking crises. There could be other reasons as well, which makes it an interesting case for banking historians to analyse.

Thus, the Partition of India also led to a partition of banking assets and liabilities in the two regions. We not only saw banks migrating from one country to the other, but also depositors migrating their balances from one bank to another. This article is merely a glimpse of what is on offer here. A goldmine of research awaits.