BJP stages a huge victory in MCD elections; rupee closes at its highest level against US dollar in 21 months; Sensex hits an all-time high of 30,133 points

Beating anti-incumbency of 10 years, the Bharatiya Janata Party (BJP) staged a huge victory in Delhi municipal elections, results of which were declared Wednesday. The party won 181 out of the 270 wards that went to polls, far more than the Aam Aadmi Party (AAP) and Congress which finished with 48 and 30 seats, respectively. The MCD election results are a big turnaround for the BJP, which could manage only three seats in the 2015 Delhi elections. HDFC Bank Ltd on Thursday crossed Rs4 trillion in market capitalization for the first time, making it only the third Indian company to do so. HDFC Bank shares have risen for eight sessions in a row, gaining 9% in this unbroken streak. It is up 29.61% so far this year compared to 0.01% for the market index Sensex. Rupee at its strongest in 21 months against Dollar

Rupee closed at its highest level against the dollar in 21 months on Tuesday. The gain followed a surge in local equity markets. Its closing of 64.2750 was last seen in August 2015. It further gained on Wednesday to 64.115. Strong foreign buying in local markets helped the rupee gain over 5.5% this year against the dollar. Higher refining margins helped boost energy giant Reliance Industries Ltd’s (RIL) March quarter results. Profits were up 12.3%. The petrochemical business continued to generate cash, even as the company put it to work in its ambitious telecom venture Reliance Jio Infocomm Ltd. The firm showed a fall in cash and an increase in debt, according to financial statements released with results Monday. 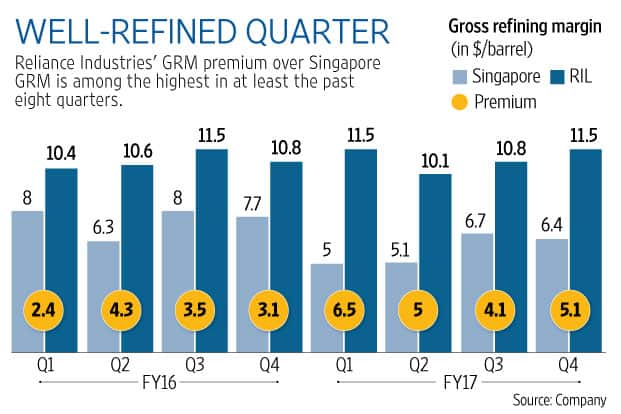 Axis Bank Ltd showed a 43% decline in net profit to Rs1,225 crore in March quarter results declared Wednesday, courtesy higher provisions against bad loans. There was a mild improvement in asset quality indicators, compared to previous quarters. The non-performing assets (NPA) ratio showed a decline on net and gross basis. The ratio is an indicator of bad loans on its books. The Axis Bank management has suggested a cautious outlook going forward. Footballer Lionel Messi scored his 500th goal for Barcelona on 23 April. His goal came of the last kick of the match. His efforts resulted in a 3-2 victory for his team against Real Madrid. It also brought Barcelona level on points in the La Liga with Real Madrid. Both teams topped the table. French election results showed that far-right leader Marine Le Pen won 21% of the first round votes on 23 April. This is behind front-runner Emmanuel Macron who won 24%. Pundits predict a victory for the latter. A victory for Le Pen would be seen as a continuation of the kind of voting trends that put US President Donald Trump in power. A naxal attack in Chhattisgarh’s Sukma district left more than 25 CRPF personnel dead and seven seriously injured. According to reports, Maoists ambushed the Central Reserve Police Force (CRPF) personnel when they were having lunch. The home ministry has ordered a probe into the incident on Tuesday. Those killed were providing security to a road construction project in the area. Chhattisgarh has been a hot-bed of left-wing extremism even as overall deaths due to Naxalism show a declining trend in the rest of the country. India’s third-largest software services firm, Wipro Ltd, reported strong Q4 results on Tuesday but forecast a weak Q1 FY18. The company may become the first blue-chip IT company amid earning headwinds to actually report fall in revenue growth, according to a Mint analysis. Its forecasted revenue growth of 1.25% masks a decline when adjusted for growth from acquisitions.