The Nikkei/Markit Manufacturing Purchasing Managers’ Index (PMI) remained at its March level, at 52.5, for the month of April. A reading above 50 implies expansion, and this was the fourth consecutive month that saw growth in manufacturing activity. The rise can be attributed to a stronger growth in new orders from abroad as well as domestic demand, even as growth in output and employment slowed. Apple’s total revenue rose 4.6% year-on-year in the second quarter of FY17, reaching a value of $52.9 billion, with overseas sales accounting for 65% of the revenue. However, iPhone sales fell 0.8%, with 50.8 million iPhones shipped during the quarter. At $2.10, it reported higher earnings per share than expected by Wall Street. Apple also provided guidance regarding Q3 FY17 results. It expects revenues in the range of revenue of $43.5 billion and $45.5 billion. 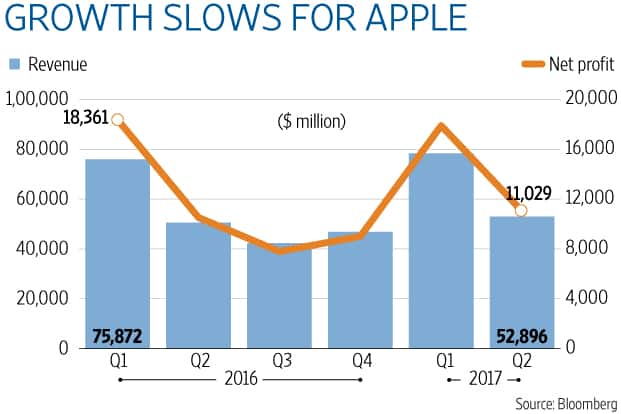 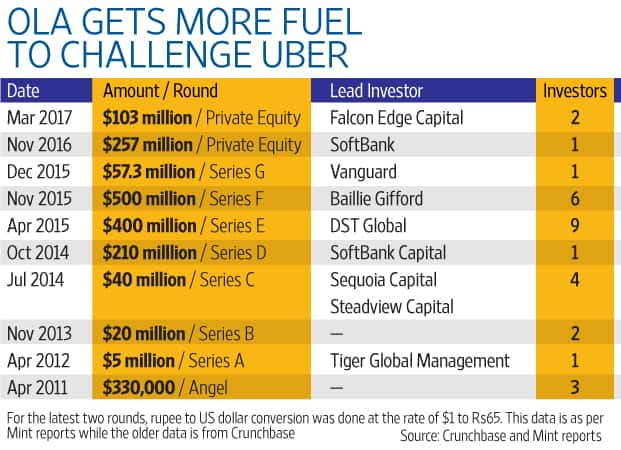 Honda Motorcycle and Scooter India Ltd (HMSI) became India’s second largest motorcycle company in April, displacing Bajaj Auto Ltd from that position by a margin of 21,330 units, with motorcycle sales rising 22% from a year ago. Honda’s success came on the back of rising sales of the Activa which recorded over 3.5 lakh monthly sales. President Pranab Mukherjee approved the ordinance to amend the Banking Regulation Act, 1949, on Friday. The act allows Reserve Bank of India (RBI) to directly intervene in banks’ dealings to handle non-performing assets (NPAs) in its attempts to resolve the Rs9 trillion-worth bad loan crisis. RBI can ask banks to reach a settlement with defaulters. Despite an increase in bad loans, ICICI Bank Ltd, reported an increase in the net profit for the March quarter. Net profit increased almost three times on the back of lower provisions, rising to Rs2,024.6 crore from Rs701.9 crore during the same period a year ago. However, bad loans increased to Rs42,551 crore for the quarter, an 11.73% quarter-on-quarter rise. Results of the Swachh Survekshan survey, which ranked 434 Indian cities and towns in terms of progress made by them on Swachh Bharat Abhiyan, found Indore to be India’s cleanest city. Madhya Pradesh’s capital city Bhopal was ranked the second cleanest, while Visakhapatnam, Surat and Mysore, rounded up the top five. India’s dirtiest cities were mostly concentrated in Uttar Pradesh and Bihar, with Gonda ranking the lowest. Indian IT leader, Infosys Ltd, announced that it would hire 10,000 Americans over the next two years, a move that has been hailed as political victory by the Donald Trump government. The company also announced that it would add four hubs for research technologies such as Artificial Intelligence (AI) and Machine Learning. The move comes in the wake of several new visa restrictions issued by the Trump administration that makes it harder for Indian IT companies to shift workers to the US for onsite projects. The CBOE Volatility Index reached a low of 9.9 in intraday trading on Monday, the lowest level since February 2007. The index measures market expectations for short-term volatility as surmised from the S&P 500 stock index option prices. The fall in volatility comes amid low expectations of a Marine Le Pen victory in the French presidential elections. The index was down by about 21% since the beginning of this year. 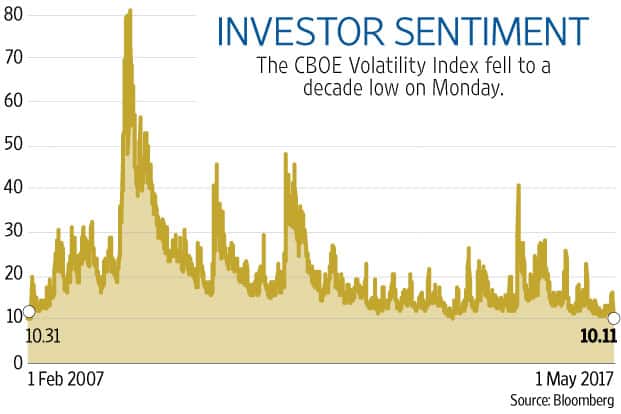